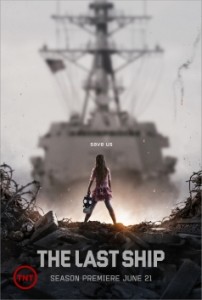 As the second season opens, Captain Chandler, XO Slattery and the rest of the crew are working to disseminate the cure that Dr. Rachel Scott developed at the end of season one.

Here are some questions to ponder: How will Chandler deal with the loss of his wife? When and how will Slattery and the crew get their ship back? Will the elder Granderson be able to carry out her plans? How do the warlords play into all of this? And who are the naturally immune and why are they such a serious threat?

I got the chance to talk to Adam Baldwin, Rhona Mitra, Charles Parnell, John Pyper-Ferguson, Christina Elmore, Travis Van Winkle, Jocko Sims and EPs Jack Bender, Steven Kane and Hank SteinbergÂ aboutÂ The Last Ship at WonderCon. There was only so much they could give away about season 2, but the intel they did share was great.