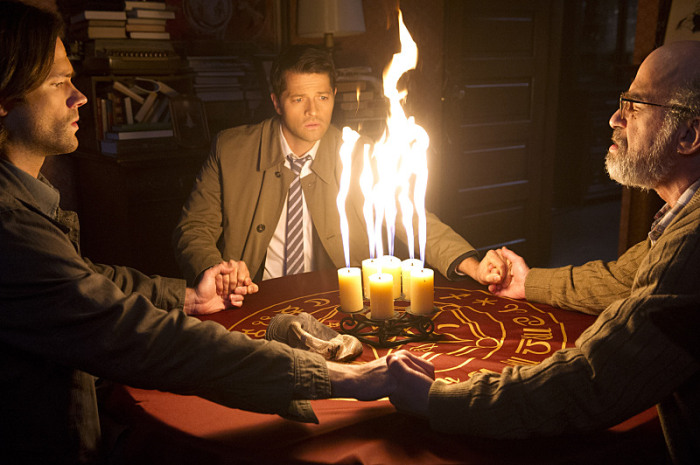 Dean: “There’s things…there’s…people, feelings…that I-I-I want to experience differently than I have before. Or maybe even for the first time.”
Priest: “Go a little deeper, perhaps, than with Gina?”
Dean: “Yeah, I’m just starting to think that maybe there’s more to it all than I thought.”
Priest: “Learning there’s more to the universe than your tiny world can be a frightening discovery. Do you truly believe in God, Agent? Because that can be a comfort.”
Dean: “I believe there is a God. But I am not sure he still believes in us.”

Sam: “You know, you were in that confessional a long time. Look, man, I’m just saying…I’m yourÂ brother, Dean. If you ever need to talk about anything with anybody, you got somebody right here next to you.”
Dean: “Okay.”
Sam: “I heard what Sister Mathias was saying about, you know, hiding pain by taking on a mission and I-I know that’s what you’re doing a little bit. And it’s okay. I mean, it’s fine. I get it. I’ve done it before, too. But…I don’t buy for one second that the Mark is a terminal diagnosis. So don’t go making peace with that idea. There has to be a way. There will be a way. And we will find it. That’s what we do. So believe that.”
Dean: “Okay, Sammy.”
Sam: “You want to…uh, try that again like you mean it?:
Dean: “Okay.”

4. Playing connect the dots between the witchy Grand Coven business and the Men of Letters. It’s about time Rowena and the Winchesters intersect.

There are four reasons I’m excited for tonight’s episode, “Inside Man.”Â 1. Sam and Cas quality time.Â 2. The return of Bobby Singer (Jim Beaver). 3. Dean vs. Rowena. 4. The Mark of Cain taking front and center. Yes, as great as MOTWs are, I love the mythology episodes more. Hopefully, we’ll get some good stuff tonight. Let’s preview:

Synopsis for “Inside Man”: DEAN AND ROWENA FACE OFF AGAINST EACH OTHER â€” Sam (Jared Padalecki) and Castiel (Misha Collins) follow up on a lead about the Mark of Cain. Dean (Jensen Ackles) and Rowena (guest star Ruth Connell) meet. Rashaad Ernesto Green directed this episode written by Andrew Dabb Buckner (#1017). Original airdate 4/1/2015.

When I talked to Ruth Connell last week, she couldn’t say much about “Inside Man.” But she did provide some behind-the-scenes insight.

TV GOODNESS: Rowena faces off with Dean soonÂ — I’ve been waiting for Rowena to meet up (again) with Sam and/or Dean. What can you tease about that?

Ruth Connell: That scene filming in Vancouver — the scene you saw where [Jensen]Â has me bent over a bar…it was actually supposed to be a pool table. It was supposed to go even farther it just didn’t quite work logistically. That was a lot of fun that day. There’s many, many women and men I think in the world who would have loved to be in that position to film that scene. (laughter)

With Jared and Jensen — they’re absolutely brand new. That’s a Scottish saying I don’t know if you say it over here — they’re brand new. They’re fresh and they’re friendly and they’re wanting to make it work and I am amazed by them. Really, I look at them and I think, gosh, if I ever get to be anywhere near as successful as they are I would love to handle it the way they handle it. They do so with such grace and humor. They’re just — it’s sickening.Â (more laughter)

Clip: “IÂ could use a little me time”

Supernatural airs Wednesdays at 9/8c on the CW.

The Evolution of a Snitch, Justified "Fugitive Number One"