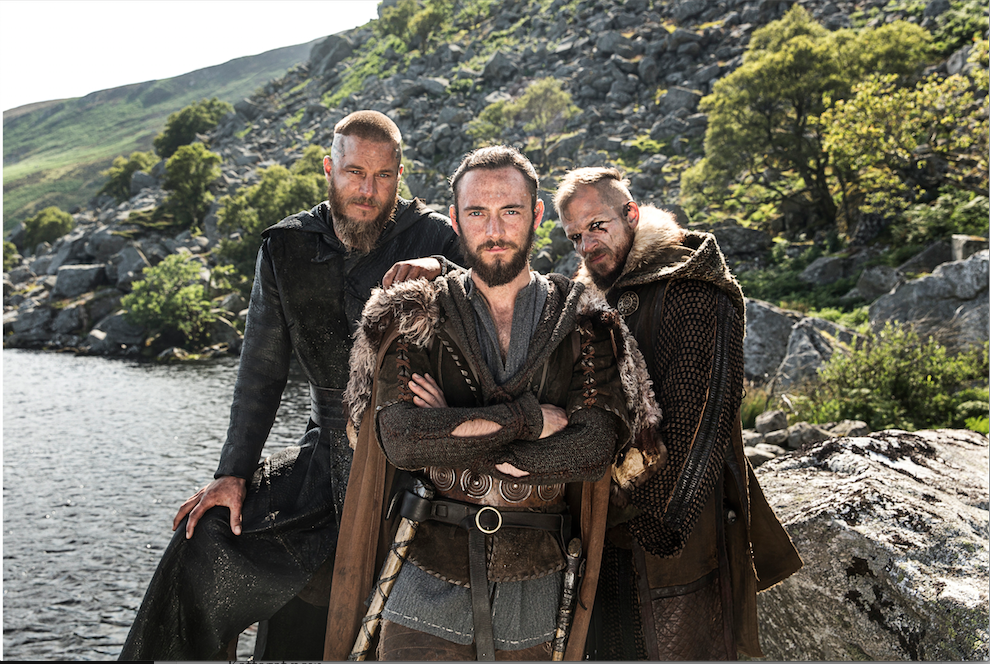 You guys are going to have to excuse me for a bit. I’m a little depressed right now. Scratch that. Make it a lot depressed. I don’t even want to write the words. But I have to.

Athelstan is dead. He’s martyred for his belief in one god.

The minute Athelstan sees the light that signals his renewed faith in his god, I knew he was a goner. Actually, while the whole scene is happening I’m pretty confused as to what’s going on. But once it becomes clear to me, that is when I realize he’s a goner.

And then it’s doubly confirmed when he tells Ragnar that his god came to him, he’s born again and he’s leaving Kattegat. This scene between the two friends is something creator Michael Hirst must have included for the (many) fans of the Ragnar/Athelstan relationship.

Athelstan: I can no longer acknowledge your gods. I suppose it is better that I leave Kattegat now.

Ragnar: What do you mean? You cannot leave. You cannot leave me! I love you. And you’re the only one that I trust so you must stay. Well, I’m happy that you have found your god. While you are here no one will ever hurt you. I will protect you.

Ragnar couldn’t protect Athelstan. Not from Floki, who’s about as strong in his beliefs about his own gods as anyone can be. Floki has been a broken record as of late when it comes to pagan gods vs. the Christian god and his belief that they should never have settled in Wessex. When word about the Wessex massacre reaches Ragnar, Floki basically gives Ragnar a big ol’ I told you so.

But then Floki turns his attention to Athelstan after witnessing his self baptism. He (with the help of Rollo) makes damn sure that all the Vikings know Athelstan threw away the bracelet of trust Ragnar once gave him. By the way, don’t for a minute think that didn’t hurt my heart when it happened. To me, it connected the two. The throwing it out into the water isn’t just a break with the Vikings way. It doesn’t just symbolize the end of his internal conflict over his spirituality. It’s a severing of his connection with Ragnar. But I like how Ragnar doesn’t let that happen. Despite Athelstan’s reignited faith, he doesn’t want to lose him. And Athelstan still wants the best for Ragnar so he decides to stay in Kattegat, which clearly is a big mistake. Huge.

Floki proceeds to hide away for a little bit. He works on the boats that are to take the Vikings to Paris. Then he receives a sign that blood must be spilled. Floki becomes scarily focused on carrying this mission out. All episode he’s been creeping in the shadows. He does so one more time. Tries to make sure no one sees him as he stalks over to where Athelstan is praying.

After this happens, I go into a state of denial. I keep telling myself that Athelstan could have lived through that. There’s no way this show would really kill my favorite character. I don’t even tear up at first. Because I just can’t believe it. And then Ragnar carries Athelstan’s body as high up as he can so he can be close to his god in burial. As if it really works that way. What Ragnar says — his eulogy for his friend — is beautiful. Painful but beautiful.

Travis Fimmel does such a great job in this scene. My heart pretty much shatters when Ragnar says, “we will never meet again, my friend.” To have Ragnar show so much emotion over Athelstan in the same episode where he acted so friggin’ coldly to Aslaug — it’s fascinating. He says he aches for this loss.

So do I. Athelstan doesn’t even get to learn about the son he had with Judith. His special son — according to King Ecbert, who saves Judith from getting her other ear cut off after she’s persecuted for having an affair.

This is all so sad to me even though it didn’t come as a complete shock. Way before this season started, it was announced that George Blagden (Athelstan) was cast as Louis XIV in a new series called Versailles. I had hopes he would be able to two series at once. But in the back of my mind I wondered if each season three episode of Vikings would be Athelstan’s last.

Now I’m wondering what kind of Ragnar we’re going to get from here on out. He’s already shaved his head and is wearing Athelstan’s crucifix. He knows he lost the one person he trusted completely in Kattegat. It’s lonely at the top for him. He can’t completely rely on his friends and family. Is he going to realize Floki’s the one that killed Athelstan? Who is he going to turn to for unconditional support? How is that going to play out? Will King Ecbert and Judith learn about Athelstan’s death? I imagine Ecbert might be as devastated as I am by this. As Ragnar is.

In this world, religious differences aren’t tolerated. And Floki never took a liking to Athelstan. Even Rollo doesn’t stand by Athelstan once he throws away the bracelet and turns his back on the pagan gods.

Get With the Program: Men of a Certain Age, Season One