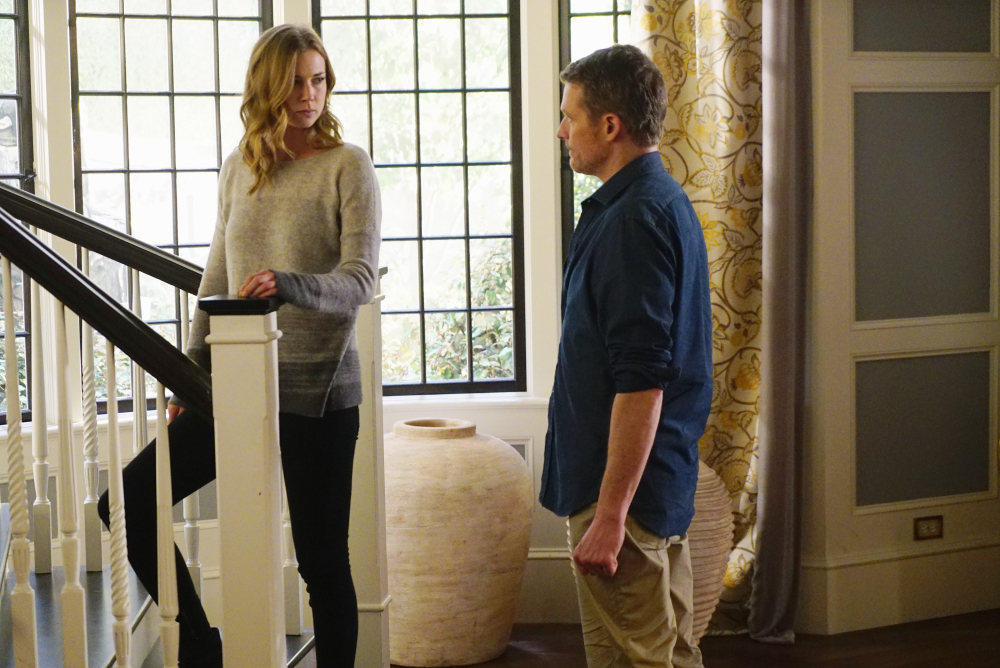 We knew this episode would have more â€œPoor Jackâ€ moments. But mama bear Stevie has come to town to rescue her boy! Poor Emily doesnâ€™t know what to do since all of her friends keep getting the short end of the stick. Hereâ€™s what we know:

-New love interest alert: Jackâ€™s mom and Emilyâ€™s dad. Thatâ€™s a good idea. They both have similar enemies of the past. They deserve a little loving.

– Canâ€™t believe that Margaux would go so far as to take a son away from his father. She has lost her mind.

-As Louise is getting going for the day, she has an opportunity to tell Nolan what happened with her and her brother. She doesnâ€™t. And, of course, Ben comes to tell her that her brother died. Hereâ€™s my question. Did that USB drive go with him? And if itâ€™s ever found. who will be the one to find it?

-Now that Victoria has money again she tries to get a wing dedicated to Daniel but there is one vote that wonâ€™t let it pass. First she thinks it is Emily but she realizes that itâ€™s Margaux. Hey Margaux – arenâ€™t you the psycho that has been trying to clear Danielâ€™s name? You could do worse then a full wing of a hospital.

-The judge sends a social worker to check in on Jack and Karl. Heâ€™s kind of a douche. Does he also have an agenda?

-Emily and Nolan bust Margauxâ€™s henchman on video. So, of course, Emily has got to kick some ass.

-Emily gets the real vile of Jackâ€™s blood but the judge wonâ€™t allow it. Stevie goes crazy in court and is held in contempt. David Clarke bails her out. Iâ€™m telling you that this is a new love connection!

-Isnâ€™t that interesting? The judge is crooked. Not the cop!

-With the help of Ben, they entrap the judge. You donâ€™t mess with Emily Thorneâ€™s friends.

-David tries to convince Emily to stop with all the revenge but she feels that Margaux has gone too far.

-At some point Emily sees that her fatherâ€™s right and meets Margaux on the street. She tries to give her real birth certificate to try and stop the madness but a car hits Margaux. Emily is horrified.

-Now weâ€™ve seen how Margaux reacts when her babyâ€™s father is killed; how’s she going to act now that her baby is gone? She lies to Victoria and tells her Emily pushed her. How messed up is that?

-I donâ€™t think that it helps that Emily told Victoria earlier in the episode to get Margaux in line or she would have too.

Next week might be the week that Emily finally reveals herself to the world as Amanda Clarke.Â Or will she?

Revenge airs on Sunday nights at 10/9c on ABC.

The Following "Home" and "A Hostile Witness"

Once Upon a Time "Poor Unfortunate Soul"

Revolution Post Mortem: Who are the Patriots? [Eric Kripke Interview]

Four Moments of Goodness From Haven “Speak No Evil”