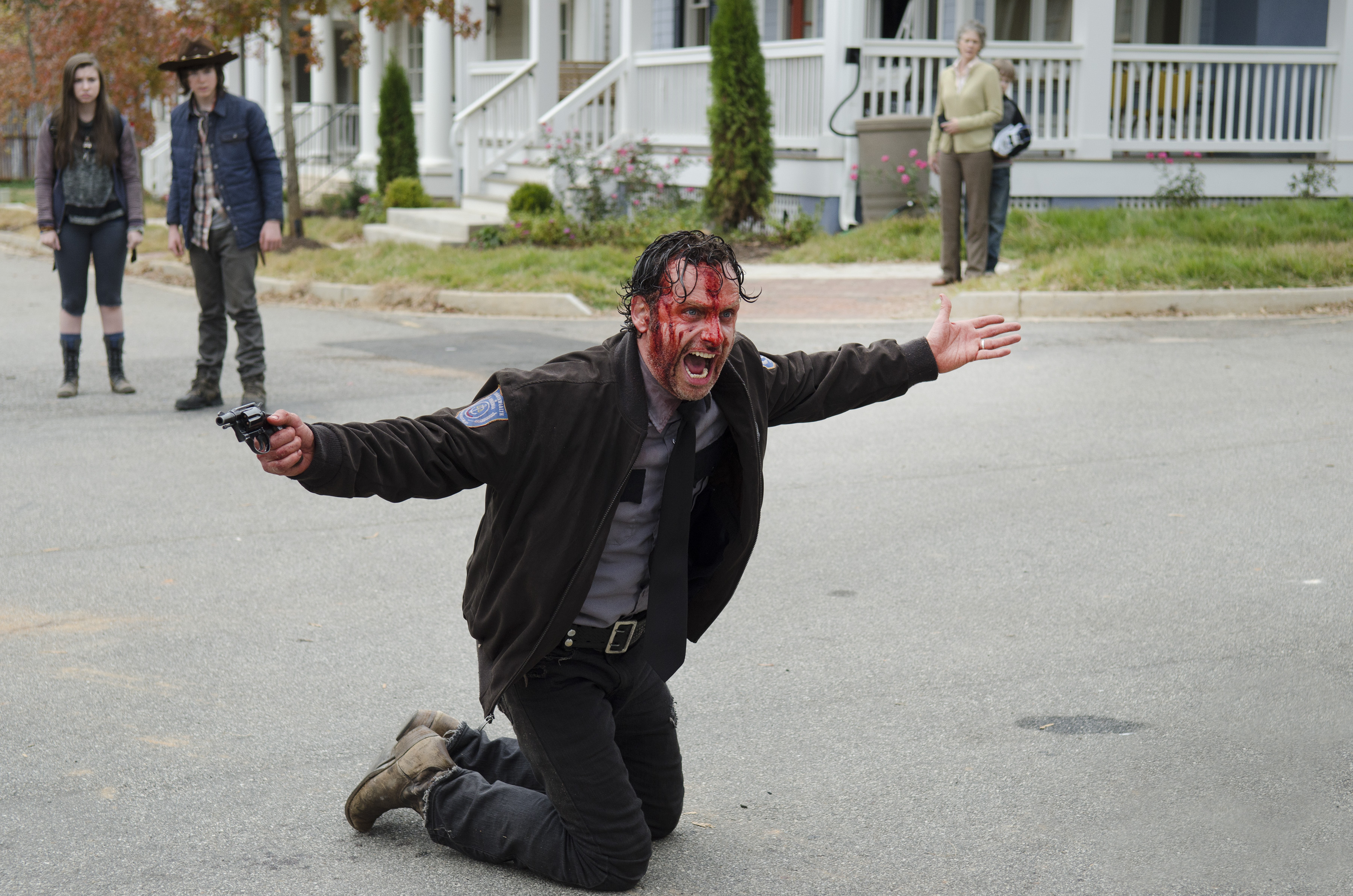 Well that got out of hand rather quickly! Rick is losing it, and everyone around him can see it. The penultimate episode of this season of The Walking Dead,Â titled “Try,” saw Rick stand up to Deanna and Pete, but the results are probably not what Rick was hoping for.

From the opening sequence of Aiden’s family listening to his run mix (great use of the tense Nine Inch Nails song “Somewhat Damaged”) to Michonne knocking Rick out, this was an episode that had me waiting for something bad to happen.

It wasn’t a surprise that Deanna knew of the abuse Pete was inflicting on his family. Alexandria is a small community. Rick’s conversation with Deanna was a telling moment. Both groups of people are willing to do whatever it takes to survive, but in different ways. Deanna thinks the only way to survive is to maintain order, and to preserve life before the apocalypse. Rick believes that people like Pete shouldn’t be allowed to live.

It may be harsh, but I was completely on Rick’s side here. Deanna doesn’t execute people; she exiles them. The problem with exiling is that that those people can come back, and they could come back with reinforcements. Rick has a much more realistic view of the new world because he’s lived in it. Deanna has lived comfortably behind Alexandria’s walls.

Rick was ready to put a bullet in Pete’s head the night outside his home. Of course Pete looked drunk, again. All Rick could say was, “Keep walking.” If there aren’t posters made up with that line, then that’d be a real shame.Â Rick clearly has feelings for Jessie, but I’m more curious as to why they are so strong so quickly. Rick likes to be the savior. He thrives off of helping people. Jessie is also the first woman since Lori died that comes off as motherly and nurturing. They barely know each other, but Rick is determined to help her.

Jessie accepted his offer, but I’m not sure how she’ll feel about him now that she saw Rick beat the crap out of Pete, and threaten Deanna in the street. That fight scene was choreographed brilliantly. Rick was filled with such rage, that before the fight even began, Rick must have been thinking, “Oh please hit me, Pete. Just give me the openingÂ to beat you to death.”

As much as I agree with Rick’s way of thinking about Alexandria, he’s not smart when it comes to strategy. He completely lost his mind when ranting in the street. He was waving his gun around so much I thought someone was going to accidentally get shot. Rick is too emotional for his own good. He needs to learn to play his cards closer to the vest. Rick could take a page out of Carol’s book, because she’s become the master at keeping her motivations a secret.

Thankfully before Rick starting shooting people, Michonne knocked him out. I’m anxious to see what is going to go down between Rick and the rest of his group in the finale. I’m not sure all of them will like hisÂ manic display.

Glenn pleaded with Rick earlier in the episode that they need to make it work with Alexandria. They have to find a way. I’m not clear about whether or not Glenn knew Nicholas threw him under the bus. Nicholas proved to be a coward once more during his confession tape with Deanna placing the blame on Glenn and the others for Aiden’s death.

Glenn wasÂ the better man, once again, by telling Nicholas that he wan’t going to be going on runs anymore. Glenn said he wasn’t threatening, but saving him. Nicholas didn’t look too happy with Glenn’s orders and promptly went and dug up a gun out in the woods. Now if I’m correct, the gun Nicholas grabbed is the same one Rick hid before they arrived in Alexandria. The same gun that was stolen from Rick’s hiding place.

There’s a strong sense that the gang is restless and uncomfortable inside Alexandria. They feel more comfortable outside with the walkers. Carl and Enid bonded in the woods talking about how they feel more at home out there. I still don’t trust Enid, but I can’t exactly explain why.

Then we have Sasha who’s going out into the woods in order to take down as many walkers as possible. Sasha is recovering from three deaths now: Tyreese, Bob, and now Noah. Unfortunately, her way of coping might get her killed one of these days.

Seeing the juxtaposition of Sasha and Michonne highlighted how different Michonne is from the first time we met her. Rosita even pointed out that Michonne didn’t bring her katana out with her. Seeing Rick melt down in the middle of the street woke herÂ up. Things are about to take a turn for the worse. She needs to step up, even if that means knocking Rick out.

Lastly, we have Daryl and Aaron out in the woods. There seems to be more and more “W” marked walkers coming their way. Then they come across the poor “W” marked woman who had been tied to a tree and eaten alive. The person, or people, who are doing this are brutal. We haven’t even met them yet, and I’m already terrified of the horrors they are going to bring with them.

– Was Carl upset that his dad pushed him when he tried to break up the fight?

– Does Michonne agree with Rick or Deanna?

– Where was Maggie this week, and why hasn’t she told the group what Gabriel said?

– Will Daryl and Aaron share what they saw in the woods?

Check out a sneak peek at the Season Finale titled “Conquer.”