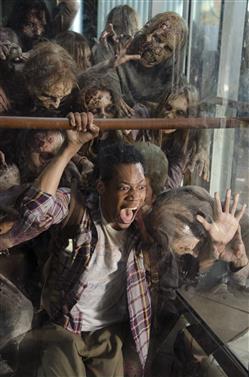 The Alexandria Safe Zone may appear to be paradise, but paradise sure is full of cowards. From Nicholas to Tobin, we are quickly learning that the people inside Alexandria’s walls are anything but heroes. There’s only one coward who redeemed himself, and that man is Eugene. SoÂ let’s discuss “Spend,” and the two brutal deaths that resulted.

The second Noah started talking to Reg about the future, I knew he was done for. This is how it works on this show. You show a little bit of hope, you die. Noah hasn’t been with the group for very long, but his death was still shocking and will be sure to make an impact. What a gruesome death!

Having Nicholas, Glenn, and Noah stuck in the revolving door had me on the edge of my seat. I really wasn’t sure how they were going to get themselves out of that situation. It didn’t matter that Eugene had distracted them with the music, there were still too many walkers. Nicholas didn’t trust Glenn’s plan, so while he escaped, Noah paid the price with his life.

Props to the special effects department, because Noah’s death was horrific to watch. The look on Glenn’s face as Noah was torn apart was devastating. Glenn is not coming out of this event the same, and Nicholas is sure to pay a price for his cowardice. What a terrible person! First he abandons Aiden, then is responsible for Noah’s death.

Aiden’s death was awful as well. Even though heÂ was a tool (who plays dubstep during the apocalypse?), AidenÂ didn’t deserve to die like that. I feel like Glenn or Noah should have quickly shot him in the head before they fled so Aiden wouldn’t have had to be eaten alive and suffer in his last moments. Nicholas is the winner for worst friend ever!

Let’s talk about the idea of cowards in Alexandria. We’ve discussed Nicholas, but let’s move on to Tobin and the shootout. Abraham was the only one to step up and save Francine. The people of Alexandria clearly don’t bother trying to help others if it means putting their own lives in danger. Their response is to walk away and leave whomever is in peril for dead. It’s obvious Abraham needed some action, but he’s also not a coward. He wasn’t just going to leave Francine to die. Tobin saw how Abraham commanded the rest of the group and realized he needed to step down.

The there’s Jessie’s husband, Pete, who is a whole other breed of coward. After some probing during an unwelcome cooking session, Carol figured out that Pete is hitting Jessie and possibly Sam. It’s never a good sign when a child asks for a gun for protection. Pete just looked like a bad guy. The man was drunk when he tried to make “friends” with Rick. Rick is going to take action, and Carol is right about the end result; Pete is going to have to die. Deanna will surely have a problem with Rick and his group taking over.

Now let’s get to Judas… I mean Gabriel. Gabriel showed up to tell Deanna that the devil is within Alexandria’s walls. Rick and the rest of the group are not to be trusted. Deanna told him she had a lot to think about. Thankfully, Maggie overheard everything, and will most certainly report to Rick.

Why would Gabriel do this? Rick and the gang saved his life. What has provoked Gabriel to make this act of betrayal? Things in Alexandria are about to take a turn for the worse. Deanna is probably rethinking her decision to bring Rick’s group into her community, and she’s about to find out her son is dead. Will Deanna try to stop Rick from taking extreme measures against Pete?

The only bright spot belonged to Eugene. He finally stepped up, and overcame his self-preservation and cowardice to help Tara and try to help save the others. Earlier in the hour, he explained to Tara how he had already pulled his weight by providing the motivation for the others to take him to D.C.

When Tara got injured by the grenade, Eugene looked terrified. He did his best to carry her to safety by shooting walkers. He may have not been a good shot, but he was getting the job done. He then proved himself again when he tried to lure the walkers away from the revolving doors with Aiden’s dubstep van.

If Glenn hadn’t knocked Nicholas out back at the van, I bet Eugene would have shot him. Eugene looked like he was bursting with adrenaline, and Nicholas was trying to get Eugene to abandon his people. I hope we see Eugene continue to grow and take action. Tara is his closest friend right now, and seeing her hurt was what finally pushed him toward becoming a man. Speaking of which, I hope Tara recovers so she can thank Eugene for helping to save her life.

– Will Glenn want Nicholas to receive punishment for betraying them during the run?

– Is Rick going to go through with killing Pete?

– Would Deanna try to kick Rick and his group out?

– How quickly will Maggie alert the others to Gabriel’s chat with Deanna?

Check out a sneak peek of the next episode titled “Try.”