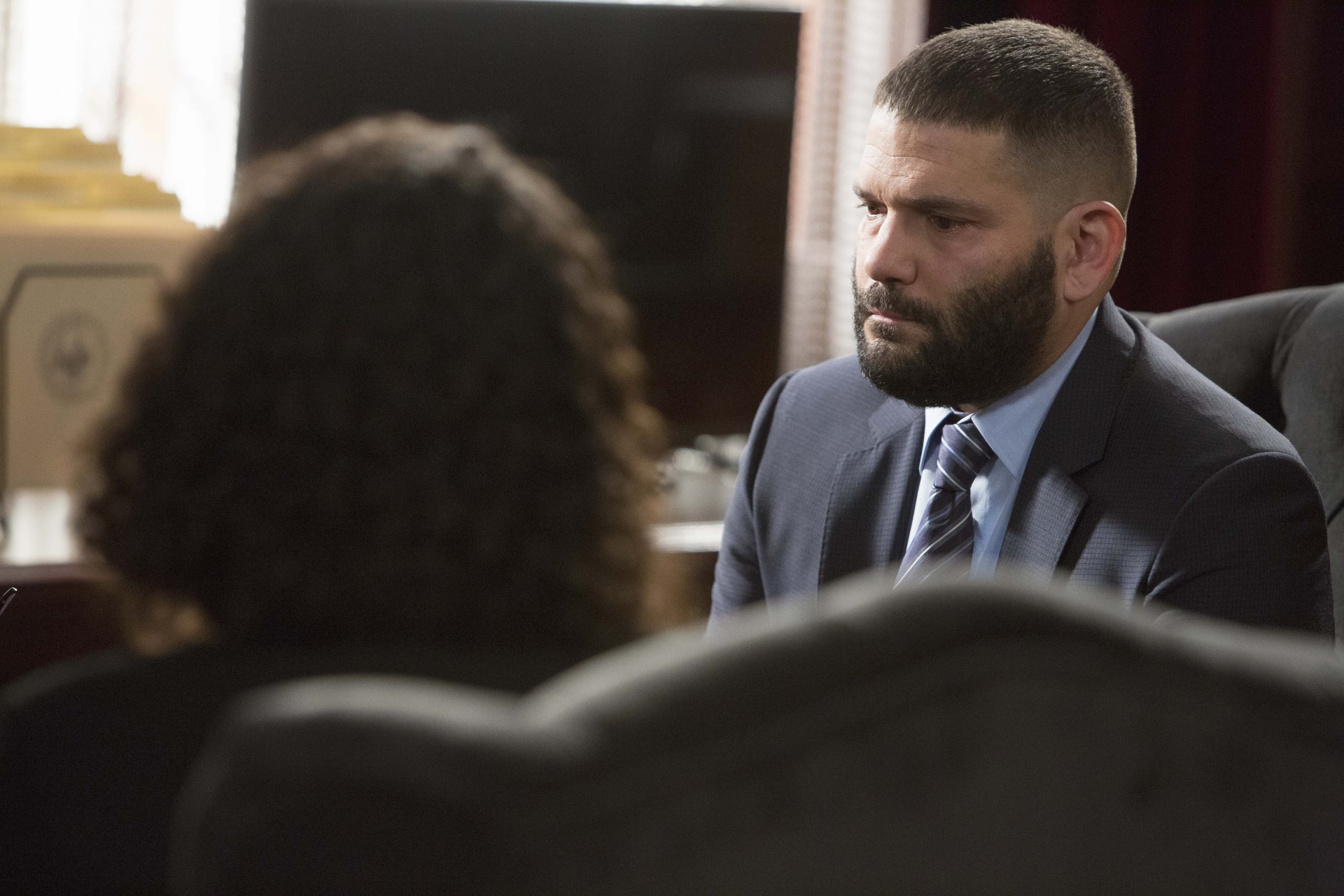 As is often the case, thereâ€™s so much going on in this episode of Scandal that itâ€™s hard to know where to begin. On â€œThe Testimony of Diego Munoz,â€ thereâ€™s a good combination of emotional moments, shocking confessions, and cases that bring us a little closer to the traditional structure of the show.

Here are a few of the highlights from this episode:

-Susan Ross is hilarious, and I love watching her transformation. Even better is how she turns her failed moment at a press conference into a way to show how strong she really is. She even makes an appearance on Jimmy Kimmel.

-Speaking of her team, I absolutely love Leo and Abby together! It looks like their relationship has gotten pretty serious (something we havenâ€™t had a chance to watch develop, sadly). I hope we see more of their relationship soon.

-Huckâ€™s wife brings those B613 files to David Rosen. The good news here is that she finally believes that her husband is telling the truth. The bad news? Sheâ€™s going public with those files, and that could hurt a lot of people â€“ like, most of our main characters.

-When Huck has the opportunity to turn all of that around by lying and saying none of it ever happened, he cracks and chooses his wife and family over what is probably the smarter choice. I have to say, though, Iâ€™m glad he makes a choice with his heart in hopes of finally getting his family back.

-Huckâ€™s description of those events and being put in that hole is completely heartbreaking. He says he kept up a routine of measuring the walls and writing letters and having lunch â€“ even when there was no food. Itâ€™s a truly powerful scene. Can we please give Guillermo Diaz an award?!

-Olivia meets her neighborâ€™s friend, who is still concerned that her friend is gone. Olivia, of course, knows what happened to Lois, but she promises the friend (Rose) that sheâ€™ll do whatever she can to help. This is also heartbreaking, especially when we learn the true nature of Lois and Roseâ€™s relationship. I love that it turns out the two women were lovers â€“ itâ€™s unexpected and beautiful.

-They are able to recover the body (or at least, it seems that way) and Olivia lies about how she died. She insists to Rose that Lois felt no pain or fear, though she knows the opposite is actually true. As she tells the story, she has flashbacks to her time on that island with Jake. Honestly, itâ€™s a little bit cheesy, but itâ€™s easy to get the point. Nothing will really ever be the same.

-Though sheâ€™s been shaken up, we finally see an attempt at Olivia trying to relax in a normal way. She sits down to watch television with popcorn and a glass of red wine (after getting rid of the stained couch cushion) but thereâ€™s another addition to her table. Itâ€™s a gun.

-Thereâ€™s not enough Jake in this episode for my taste, but his last scene with David Rosen is a powerful one. David announces he plans to go forward with the B613 files because he wants to get the bad guys. Simply put, Jake tells him that they are the bad guys.

What did you think of â€œThe Testimony of Diego Munoz?â€ Be sure to share your thoughts in the comments below!

Secrets and Lies Preview: "The Sister"

Dancing with the Stars “Season 18 Week 7” aka Latin Night