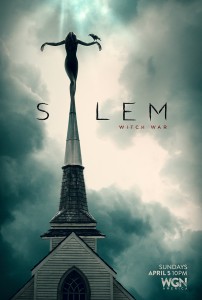 Want an exclusive behind-the-scenes look at the new season of Salem? Salem: Witch War is a 30-minute featurette, which will give us an in-depth look at the series ahead of the showâ€™s second season. Featuring all new footage of the cast and creators from the set, Salem: Witch War revisits the history behind the inception of Salem and offers fans a glimpse of what lies ahead for Salemâ€™s deadliest witch, Mary Sibley, and her shadowy accomplices when they return in the heat of a â€˜witch warâ€™ in season 2.

Season two opens at the dawn of the witch war set into motion at the end of season one, with its catalyst and Salemâ€™s deadliest witch, Mary Sibley at the center of the mayhem as she faces off against new and old adversaries vying for her throne.Â  In the wake of the destruction caused by the Grand Rite, completed by Mary and inadvertently triggered by Isaac Walton in the season one finale, the fates of Captain John Alden, Cotton Mather, Tituba, Anne Hale, Mercy Lewis and Isaac hang in the balance.

Curious about the new characters?

New to the embattled 17th-century village for the second season of Salem are Lucy Lawless as Countess Marburg, one of the last descendants of a legendary line of ancient German witches; Stuart Townsend as Samuel Wainwright, a mysterious doctor looking to uncover the secrets of Salem as he keeps a few of his own; Joe Doyle as Baron Sebastian Marburg, the charming and cultured son of the Countess; and Oliver Bell as Maryâ€™s long-lost son, who was revealed in the season one finale to have been secretly kept alive all along by her coven.

The Strain Preview: “The Born”