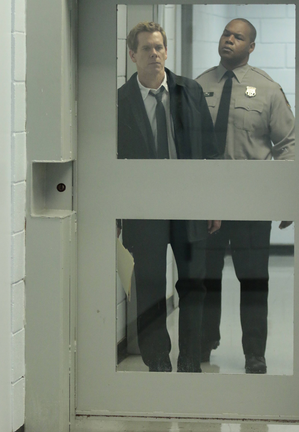 Thanks to the season 3 promos that have been airing the past few months, we’ve all been asking ourselves one question.

Well, now we know what’s in the box and I kind of wish I didn’t.Â After tonight’s episode, I’ll never look at a metal box the same again. That being said, I shouldn’t be surprised seeing how The Following manages to repeatedly push the envelope past the point of disturbing and go places my relatively normal brain would never naturally go.

Honestly, this show is dark and twisted and I often wonder how they manage to get away with some of these things on network television. But that being said, I know what I signed up for and have become somewhat desensitized to it over the past two years. Murderous marionettes. Okay. Dinner with dead bodies. Sure, no big deal. But then they pull out something like this and suddenly my brain screams “HOWÂ DO THESE PEOPLE COME UP WITH THIS?!” I don’t know why this particular form of torture really hit me…maybe because it’s just that — torture, not murder. Either way, that is part of what keeps this show shockingÂ and compelling and brings us back each week toÂ root for the good guys.

In case you’ve been lucky enough to forget what was in the box, let me remind you, it was Agent Clarke. I still can’t wrap my head around how a full-grown man can fit in to such a tiny box. But according to box-maker Neil, it is entirely possible.

Neil: This is a pithing needle, used on cattle. Iâ€™ll insert it in the base of the skull. Youâ€™ll be paralyzed but fully conscious. Then, Iâ€™ll dislocate your joints, one at a time. Thatâ€™ll allow me to fold your body limb by limb on top of itself. Youâ€™ll be aware every moment. Hopefully, youâ€™ll appreciate the artistry in what youâ€™re experiencing.

Disjointed or not, I still can’t fathom it. But then again, I’ve never really tried to shove a man into a box so I can’t actually speak from personal experience. Nevertheless, it’s not only the idea of it, but how Neil describes it that truly gives me the chills. Knowing that ClarkeÂ was fully conscious and able to feel every bend, twist and break is horrifying. After hearing that,Â I can’t blame him for confessing with the hope that he would avoid this fate. Obviously, we know these crazed follower typesÂ don’t just let people go because they do what they’re asked. These people aren’t honorableÂ or sane. Especially Neil. I love that even Daisy is terrified of him and looked completely mortified by his description. She may have no trouble with murdering people, but even she has her limits, which Neil clearly does not. And what makes this even better (in the twisty, thriller way) is that this man appears to the world as a normal, caring son who diligently takes care of his ailing father. He could be your neighbor, your coworker, the guy behind you in line at Starbucks and you’d never know. Shudder.

But my real question is who is the mastermindÂ behind this? I have trouble believing it’s Dr. Strauss since he’s behind bars, but the fact that he mentored both Joe and Andrew makes it pretty clearÂ that he’s capable of such madness….or instilling and fostering such madness in others prone to psychopathy. That leads me to think it may be another of his former students. I could be way off base and obviously I have no way of knowing or identifying any other names on that list, but I can hardly imagine that they’d bring Strauss back in to the fold without giving it a bigger meaning.

But off the followers and back to the ones who will hopefully bring them down. This brutal torture and ultimate murder (which I sincerely hope for Clarke’s sake was swift) obviously hits home for Ryan. Hurting him is one thing. Hurting his friends is quite another. And this, this pushed him over the edge. As we saw Ryan break down in the shower at the end, it was clear that he will go to any length to catch these guys. So once again, Ryan is on the trail of vengeance and despite his resistance this week, I have no doubt that Joe will play a crucial part in achieving that. And as much as I hate seeing Ryan broken and feel bad that ClarkeÂ died, I am more than ready to see Joe and Ryan together. I was beyond excited when I thought Ryan was going to visit Joe in prison and then beyond disappointed when it was just Strauss. But I understand the need to build it up. To show that this time, unlike the past, Ryan really doesn’t want anything to do with Joe. He wants to move on and believe he can live his life without having to associate with Joe. But two episodes is more than enough build up for me. I’m ready for some Ryan and Joe time andÂ hopefully I won’t have to wait much longer.

Be sure to catch The Following Mondays at 9/8c on Fox.

Bates Motel "A Death in the Family"