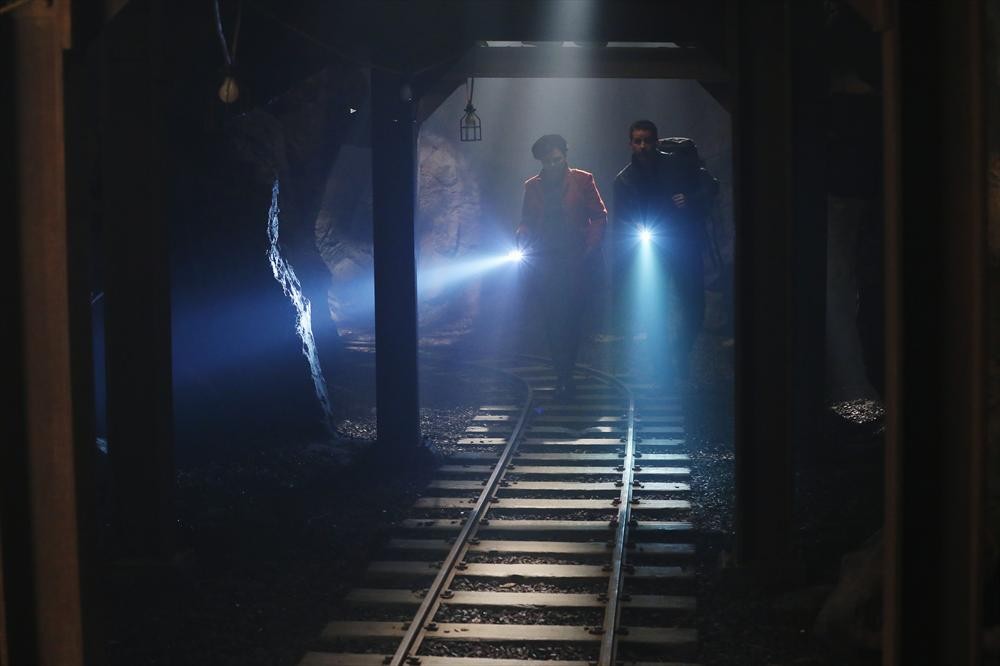 ABC manages to pack a whole lot of tasty goodness into this episode of ABC’s Once Upon a Time, we can really see the shape of the story to come and it looks to be full of fun surprises.

Ursula and Cruella are on their very best behavior, trying to pretend to fit in with the town. Itâ€™s a little sad that the townsfolk choose to treat them badly. What difference could a few random acts of kindness make? The potential is unlimited.

While Henry is looking through the storybook again, Regina notices that some of the pages are different. Henry reminds her that August added the story of Pinocchio to the book himself. This makes Regina wonder how August knew how to take the book apart. The only one they can ask is Pinocchio, who has forgotten his life as an adult. This storyline really does raise some very good questions. Was the Sorcererâ€™s house always in Storybrooke, or did it arrive with the second curse? If it was always there, did August somehow find it? Itâ€™s still not clear how all the blank storybooks ended up in the Sorcererâ€™s house, since Blue was so adamant that the Sorcerer and the Author were two different people. But hey, on the upside, with thousands of blank storybooks available, Disney is finally free to market the book as fan merchandise. Theyâ€™d make a killing with the â€œwrite your own storyâ€ blank volumes.

Back in the Enchanted Forest, the evil trio convince Snow and Charming to go on a quest to the Tree of Wisdom. Being wise, the tree will only answer questions from heroes. (Of course). This sequence feels very contrived to me from start to finish. Snow and Charming could easily have made the trip alone, no need to be escorted. And why would they continue after Maleficent murdered the bridge guards? But at the end of the day, it all works to reveal the big secret; both Snow and Maleficent are pregnant. Because Emma is a child of True Love, she has potential to be very powerful, and that could make her good or could entice her to be evil. This leads us to the terrible secret that Snow and Charming are trying to desperately to hide. They did something to ensure Emma ends up with only light magic, and whatever it was that they did cost Maleficent her child. Not very heroic of them.

In present-day Storybrooke, Ursula and Cruella expertly maneuver Snow and Charming into going exactly where they needed to be: down to Maleficentâ€™s ashes. As the people who wronged her the worst, they are the key to her resurrection. With everything that weâ€™ve learned about her, Iâ€™m kind of glad sheâ€™s back. Of the three new villains, she is the one with the most potential for a fantastic storyline. The closing scene with her putting the baby rattle back together again shows us that her feelings for her child run deeper than anyone knows. Sure, those feelings might be channeled into rage against the town, but itâ€™s also possible that they are the key to her redemption. I canâ€™t wait to see which!

It would appear that Emma has done some growing over the break. Even though she knows that Hook is lying to her, she is willing to let his secrets remain his, just asks him not to lie to her about it. Her parents take this as proof that she is finally learning to trust, and of course that means that they will continue to lie to her. How can they not see that lies on top of lies will only make the issue worse? This show really does do a fabulous job of turning the fairy tale paradigm on its head. Clearly the heroes arenâ€™t all white steeds and shining armor. Which, of course, leads us to have more faith in Regina finding her happy ending after all.

Although I really feel strongly about Reginaâ€™s apology to Marco as being one of the best scenes of the show, I have to award it second place against that closing shot. When Maleficent repairs the baby rattle and shakes it to prove to us what it is, the look on her face is really multifaceted. On the surface it looks like determination to wreak havoc in town, but below that is a sense of loss. Iâ€™d even go as far as to say love. Which makes me wonder â€“ is it possible for someone like Maleficent to experience love? If so, thereâ€™s hope for them all.

Bates Motel Season 3 Premiere Preview: "A Death in the Family"

The Fashion Fund “Cocktails With the Committee”