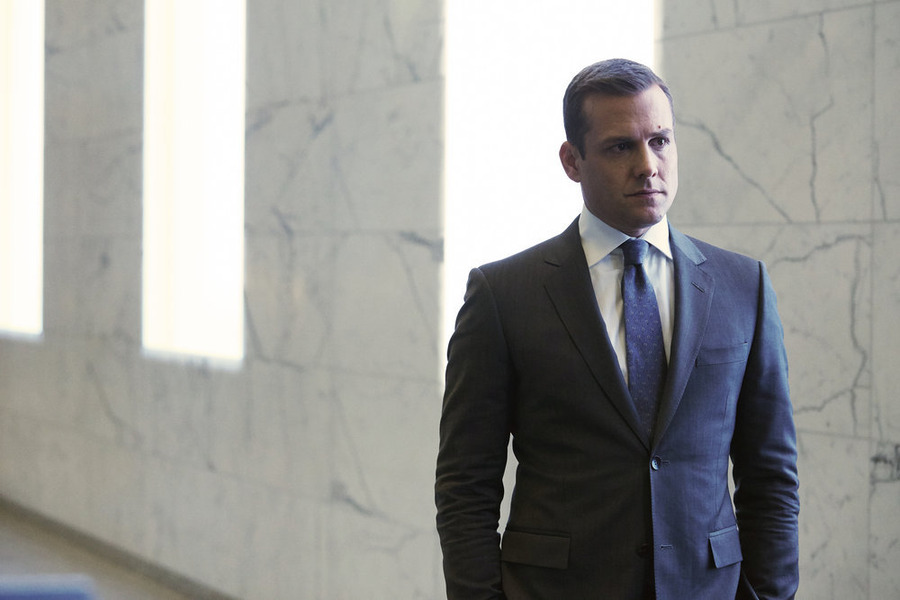 Related Story: For a recap of the finale go here.

Just think about it. We live in a Suits universe where Louis knows about Mike’s fraudulent ways; the law firm is now known as Pearson Specter Litt; and Harvey says out loud that he loves Donna. Tonight, it’s the season four finale, which brings back a couple of formidable characters who will no doubt cause trouble for Harvey, Mike and the gang.

Synopsis for “Not Just a Pretty Face”: When SEC investigator Sean Cahill (guest star Neal McDonough) fails to link his corrupt boss Eric Woodall (guest star Zeljko Ivanek) with corporate raider Charles Forstman (guest star Eric Roberts), Harvey consults with Jessica but must ultimately revisit his own uncomfortable past in order to find a way to put them away for good. Mike and Rachel confront the fact that, while Rachel is Harveyâ€™s associate, Mike is his guy. And Donna helps Louis with an unexpected crisis.

In a press call, Suits star Gabriel Macht talked about the finale and he weighs in on the recent Harvey/Donna “You know I love you” moment that has fans of the show buzzing.

About the season finale

Gabriel Macht:Â I think it’s what people are going to want, you know? I think the production and Aaron [Korsh, Suits creator] and the cast and everyone is on the same page that we’re giving the fans what they want.

Gabriel:Â We have Neal McDonough who is coming back who is an absolute ball to work with – sometimes frighteningly difficult to work with because we make each other laugh so much.

There’s one take at the very end where we’re both – the stakes are pretty high, and we just couldn’t get through it. It took us a half an hour to get through the scene because we just – what we had done is I had showed him the Jim Carrey SNL spoof of Matthew McConaughey.Â And we were just on the floor – just on the floor crying of laughter. We couldn’t get through the scene. So, I – I mean I loved working with him, and hopefully he’ll come back.

Gabriel:Â Eric Roberts comes back. Our finale is…we’re dealing with a lot of things in the present. Some of the stuff that happened at the end of Episode 4-10 (“This is Rome”) comes back to haunt us as far as (Charles) Forstman goes.

And Zeljko Ivanek – he’s involved. And we have to sort of get to the bottom of that threat. And the Forstman character poses what I have felt in all four seasons as the largest threat.Â Because we also delve into a flashback ofÂ how we meet Forstman and what kind of influence he has on Harvey. IÂ think in maybe 4-01 or 4-02, 4-03, one of those episodes in the very beginning where Mike sort of makes a deal with Forstman…Harvey says no, no, you can’t go there because you don’t know what he’ll do. And that story is explained in 4-16. And it’s a flashback.Â So, you’ll see Harvey early on, and that’s when we’re going to actually meet Marcus who is Harvey’s brother.

Gabriel:Â Billy was just great. He was a good match for me. And he’s got, I would just say he’s got a little bit of that tough guy that we’ve created with Harvey, you know? And so I think there’s going to be some good stuff for us to play together in the coming years. So, we’ll see. We’ll see how it turns out.

OnÂ whether Harvey’s really in love with Donna (Sarah Rafferty)

Gabriel:Â Everyone is going to have their own interpretation of that. That’s part of what makes art an incredible medium. I think that there was a lot at stake in this last episode and, of course, she means so much to him. I think it’s really in the eye of the viewer to take what they think. I know that the producers and the writers and some of us actors, we all have different ideas about that moment. It was a very complicated moment at the time when we were shooting it.Â And I think, the fans really wanted to see that. And I think it blew some people away in many ways. And I think the fallout of that happens in the next episode, and we’re going to see how that all manifests. As far as I’m concerned, I actually find it really hard to answer that question.

I just think it’s a complicated thing. They’ve been together for however long – fifteen years. They did have that one time. They decided not to move forward with their relationship as far as having an intimate relationship. I have always looked at it in a similar way to like Bond and Moneypenny, you know? It’s like he is her better half, but I don’t know if she’s the one. You know what I mean? So, I think it’s complicated. And I think we’ll see what course it takes over the next season – over the [finale] for sure and season five. If it brings them closer or if it pushes him away. We’ll have to see.

According to USA Network, the season finale is shocking. SuitsÂ airs tonight at 10/9c.