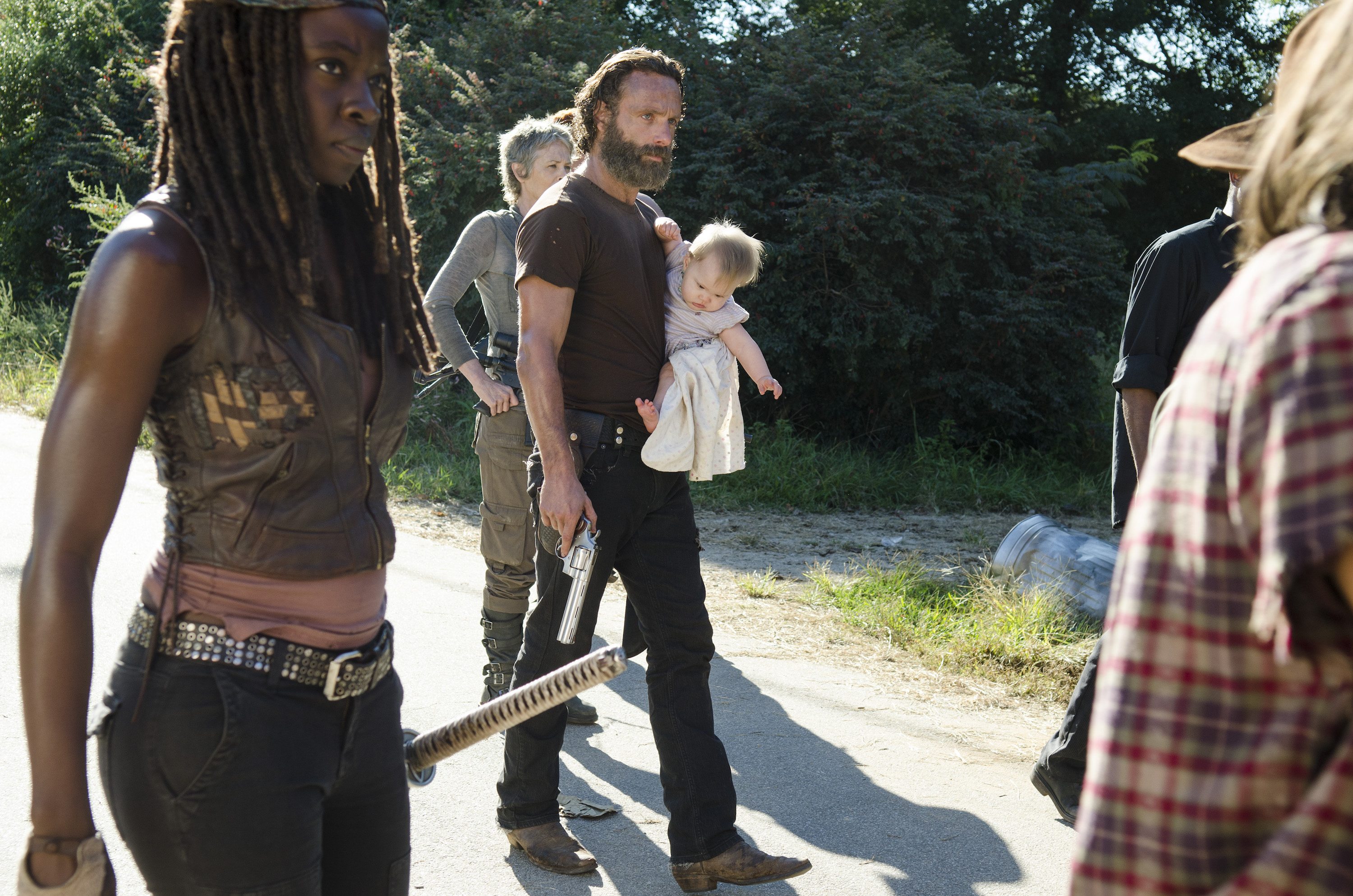 It’s that time once again where we must say goodbye to another beloved member of The Walking Dead. We must mourn the loss of Rick’s glorious, mountain-man beard. I’ll give you a moment to wipe the tears from your eyes.

Feeling better? Okay, let’s talk about “Remember,”Â  and how everyone adjusted to their news digs. The episode opened with the gang entering the gates to the Alexandra Safe Zone. They meet the (overly?) nice leader, Deanna Monroe. Deanna took Rick aside first to speak with him about the town. She also videotaped everyone’s conversations because Alexandria believes in transparency.

Alexandria was a planned community before the world went to crap. She told Rick his group was the first they’d considered letting in in a long time. Rick’s response was very “Rick.” He said they should keep their gates closed to anyone on the outside. People will take this place over in a heartbeat. To her, this meant Rick was already feeling protective. This would not be the case at the end of the episode.

It was surprising how easily everyone handed over their guns before being shown to their new homes. OneÂ of the strangest aspects of the episode was seeing the gang juxtaposed with suburbia. Thankfully, everyone (except Daryl) tookÂ the chance to take a shower. This was the moment Rick shed his Grizzly Adams beard. It was almost strange seeing him clean-shaven. We haven’t seen this side of Rick for a long time. It was a good thing he shaved, because a pretty lady named Jessie came by and gave him a haircut.

I was glad everyone decided to pull a massive slumber party. Even though they want to believe in Alexandria, they can’t be sure yet. Deanna made a house call to let everyone know she started thinking about what jobs to give everyone. She knew Rick’s and Michonne’s, but wouldn’t reveal them just yet.

Carl was introduced to Jessie’s son, Ron. Ron then introduced Carl to his friends Mikey and Enid. Carl looked like he was going to faint at the sight of a girl his age and video games all being in the same room together. Carl has come a long way in this new world. Despite the joy he must have felt interacting with kids his own age, he still had the smarts to warn Rick that they would become weak in Alexandria. They can’t let that happen.

It turned out Carl wasn’t the only one thinking about this. It became evident the second CarolÂ walked through the gates that she was going to play a part. She was going to play the role of the meek woman who acts like a mother to everyone. This plan is brilliant! If Alexandria becomes a threat, they won’t see her coming. They will have underestimated her abilities. She sounded very convincing during her taped conversation with Deanna, even saying how much she missed her husband. Now we know that is a big, fat lie. She’s also dressing the part of a soccer mom. Even Daryl thought she looked bizarre.

Even though Alexandria seems idyllic, there are some bad eggs lurking about. We first caught a brief, shadowy glimpse of Jessie’s husband. He didn’t seem too thrilled about his wife giving strange, handsome men haircuts. We were then introduced to Deanna’s son, Aidan. I already hate this guy. He put Tara, Glenn, and Noah in danger when he and his buddy, Nicholas, revealed they had tied up a walker that killed their friends. These boys are the worst! Thankfully Glenn stepped in and killed the walker before it bit Tara.

Even Deanna seemed grateful when she witnessed Glenn punch Aidan back inside the walls. Deanna told everyone that Rick’s group was a part of the community and they are to be treated as equals. She then told Rick and Michonne she wanted them to be constables. That night, Rick put on his new uniform, and told Daryl and Carol what the plan is. They’ll play along and be part of this group, but if the members of Alexandria can’t make it work with them, they’ll just takeÂ Alexandria from them. Did anyone else hear some of the Governor coming out in that moment?

I don’t blame Rick for staying on edge and being paranoid. There are clearly things going on that are fishy. Not only are there some people less than thrilled by the gang’s presence, but there are things amiss: Enid sneaking into the woods; Rick’s gun hidden in the blender went missing; the people banished from the town that Deanna mentioned.

– Where did Enid run off to?

– Will Daryl ever take a shower?

– Will Rick hook up with cute neighbor Jessie?

Check out a sneak peek of the next episode titled “Forget.”

The Following Returns With "New Blood"

Once Upon a Time "Darkness on the Edge of Town"

The X-Files “My Struggle II” Leaves a Wicked Cliffhanger

Appearances Can Be Deceiving, The Following “Flesh & Blood”