Once Upon a Time “Darkness on the Edge of Town” 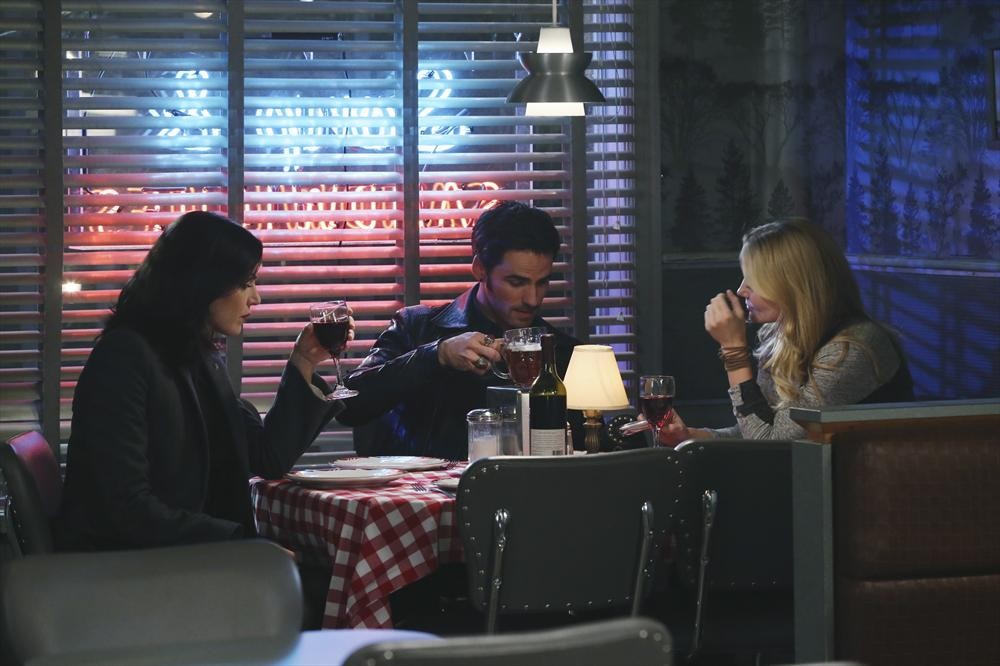 After such a long break, itâ€™s great to see our favorite town folk up on the screen again. Also great to see the happy-go-lucky sunny days montage so we know everything has been peachy in town and we havenâ€™t missed any action. But of course it canâ€™t last. No self-respecting fairy tale can have a â€œhappily ever afterâ€ unless itâ€™s over, and this story has a long way to go yet.

This first episode lays a lot of groundwork for the coming story arc, with Rumple gathering his Evil League of Evil from his options outside of town. He has a surprisingly easy time recruiting Ursula and Cruella, given how many times he has betrayed them in the past.

If I had been Ursula (Merrin Dungey, Alias, Chasing Life, Summerland), Rumple would have ended up in the shark tank before finishing his hellos. But clearly sheâ€™s a deeply unhappy woman. Or fish. Octoperson? She wants a way out, and with not-quite-dead Maleficent soon to join the team, theyâ€™ll soon be ready to start interfering with those elusive happy endings.

With the fairies finally out of the hat, Regina gets a tip about The Author. As usual, Blue knows more than she is telling, and she warns them that The Author and The Sorcerer are two very different people. I hope this means that we will get to meet them both at some point. But even if they find The Author, what currency does Regina have to convince him to rewrite her story? He would have to be watching to know what she is becoming. If heâ€™s watching, he would have to be nearby. Is it possible that we have already met him unwittingly? This storyline is very intriguing, thereâ€™s so much potential in it.

Now that Henry knows that The Author leaves clues in his work, heâ€™s once again pulling out his Sherlock Holmes hat and digging into the details of the storybook. Nobody knows that book better, so he is sure to uncover the clues. Where they may lead is another question, however. No doubt a road with many twists.

The beastie this week is by necessity easy to vanquish, since time is limited. Itâ€™s fun to watch the regulars snap to their usual duties without any discussion. The mixture of done this before and letâ€™s poke fun came out just right. As is becoming their habit, Emma and Regina work together to save the town, and we only find out much later that their focus was a bit off. Itâ€™s not Regina that the beast wants, itâ€™s actually Emma. Interesting that Rumple sees her potential for great evil and hasnâ€™t yet taken advantage of it. He didnâ€™t waste time with Regina, or Cora either for that matter. He must have big plans for Emma in the long term.

What happened between Charming and Snow White, and Ursula and Cruella (Victoria Smurfit, Dracula)? Thatâ€™s a secret that looks to be a fun ride to discovery!

This episode is a bit light overall. It has been a long break, so by necessity there’s a lot of “remember this” included. With all the intertwining events laid out clean and fresh for the back half of the season, we can expect a lot of ups and downs in the near future. Don’t forget to buckle that seat belt!

Moment of Goodness: Has Regina Succeeded?

This episode has a strong theme of togetherness. Rumple knows that he needs help to hit the reset button on his life in Storybrooke, and Emma knows that success comes from working as a team. So itâ€™s very telling that when the beast endangers Emmaâ€™s life, Regina chooses the sacrificial move and offers herself up as bait. Any fairy tale will tell you that self-sacrifice is a core value of any hero. Has Regina truly succeeded in changing her stripes? It would appear so.

Once Upon a Time airs Sundays on ABC at 8/7c.