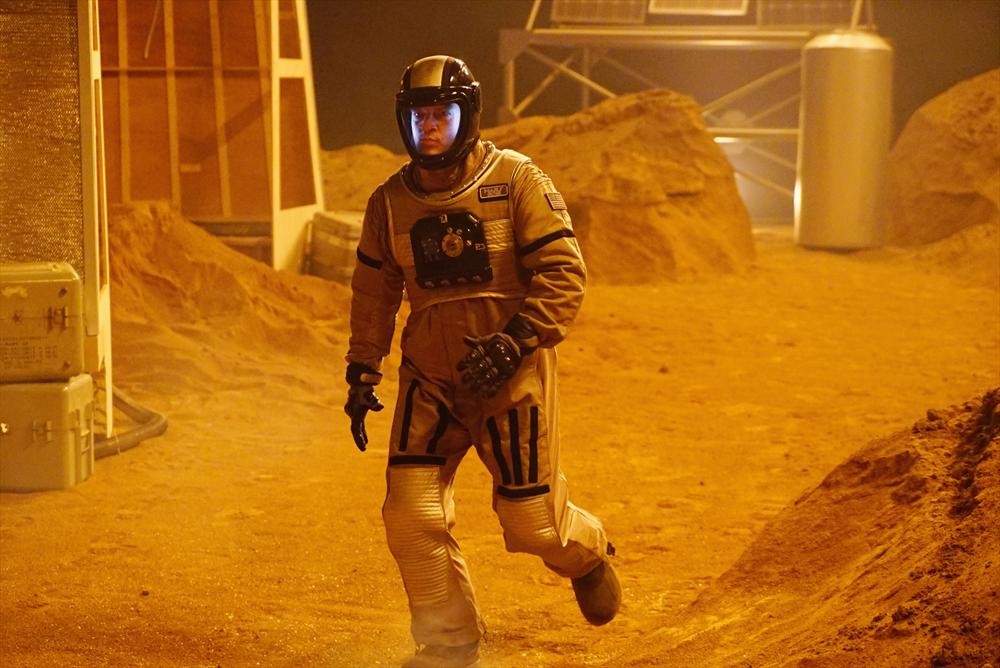 After the drama of last week and the week before, it was nice to have a fun episode. I think it was a great way to end the month of February after the sweeps episodes.

This episode reminded me a little of Firefly. I bet they had fun making the episode and nobody looks better in a space suit than Nathan Fillion. Stana and Jon looked pretty good too, donâ€™t get me wrong, but Nathan stole the first few scenes. He acted like a little kid. I am still smiling and I laughed while watching the opening sequence. LOL!!

-What was with Alexis and her friend David playing laser tag without Castle? I love the laser tag usually, but it just seemed a little off for Alexis to be playing it with someone other than her dad.Â I am guessing that this new guy in Alexisâ€™ life is just a friend, but it might be kind of nice to see her with a new boyfriend. Especially after the whole fiasco with Pi.

-I am not sure about Martha’s new boyfriendÂ yet. I will have to see what I think as time goes on. I have not made up my mind about Benjamin.

-How strange will it be with Martha moving out? I am not sure how I feel about this yet either. I guess we will see as the rest of the season progresses and what the last seven episodes bring. For now, the jury is out on this one ~ ask me at the end of the season. : )

-Itâ€™s difficult to narrow it down this week. Itâ€™s nice to have a fun, lighter episode once inÂ a while, especially after all the drama with the two-parter involving Jerry Tyson (3XK) and Dr. Kelly Neiman. I know there are the dramatic ones and then there are the ones just like this week that are just down right fun and funny!

-I liked all the theories and Castleâ€™s references to 2001:A Space Odyssey.

-I love theÂ CaskettÂ relationship now that they are married!! It is so cute to watch the changes in their relationship. I think the most surprising thing for me is how much they have both grown and evolvedÂ since the first episode up until now. I always love me some Caskett moments and interaction in an episode. I never get tired of it. : )

-The fact that once Martha left and the apartment was too quiet and Castle and Beckett decided to go on a date at an Indian restaurant was a nice way to end the episode, I thought.

This week’s case involved a lot of familiar faces.

Sterling K. Brown,Â Ed Redley — Sterling is best known for playing Roland on Lifetime’s Army Wives; Detective Cal Beecher on Person of Interest and as Gordon, the evil hunter who made it his business to try to track down and kill psychic kid, Sam Winchester on Supernatural.

David Rogers,Â Viggo Jansen — David recently played Gunnar’s brother, Jason, on ABC’s Nashville. Jason’s the bio dad to Micah. For a while there, Gunnar was made to believe he was the baby daddy. Rogers was also Ben, Jane’s brother on ABC Family’s Jane by Design.

OK, I canâ€™t find anything this week that was too disappointing. My mainÂ complaint is that when they showed the preview and said that it returns in three weeks, I thought, â€œWhat am I going to do without Castle for that long?â€

Castle airs Mondays at 10/9c on ABC. It returns in three weeks on Monday, March 16.

What We Learned from Scandal “Nobody Likes Babies”