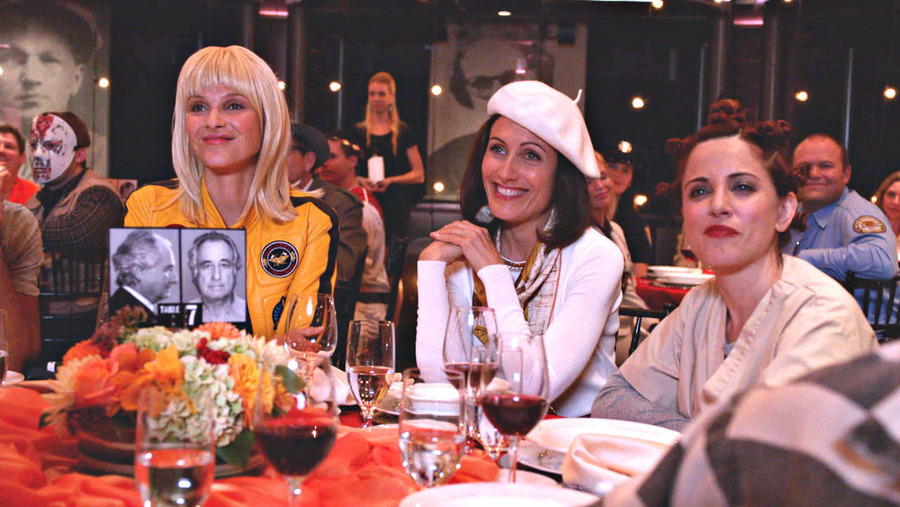 Last week’s Adult Thanksgiving on Girlfriends’ Guide to Divorce was a doozy of a holiday, wasn’t it? First of all, the kids ended up with an invite along with Jake, Will, Will’s roommate, Marco and Delia’s dad. Oh and a ghost, too.

Thankfully, the children weren’t the ones who caused the drama. Well, not most of the drama. Little Charlie did use his considerable texting skills to wrangle an invitation for his dear sick dad. Plus, his imaginary friend, Chad, told him to kick Will in the shin. So, really, it was the adults…plus Charlie…a little bit of Chad…and that ghost…that caused the drama in “Rule #46: Keep the Holidays Low Key.”

The get together was anything but low key. There were loud political arguments, emotional conversations and Jake marking his territory. At one point I was thisclose to pausing the action at the dinner table because I was afraid of what was going to be utteredÂ next. The situations in this episode were awkward, painful and uncomfortable, but when it was all over, I was thoroughly exhausted…and entertained. And maybe a little bit hungry. I kept thinking about Jo’s spinach artichoke dip.

This week is the penultimate episode of season one.

“Rule #92: Don’t do the Crime If You Can’t Do the Time”: Abby (Lisa Edelstein) and Jake (Paul Adelstein) are finalizing their divorce, but getting along better than ever. Meanwhile, Delia (Necar Zadegan) is up for partnership at the law firm but her relationship with Gordon Beech (Matthew Glave) threatens her chances and Phoebe (Beau Garrett) has a secret history wtih a new mom at school, famed photographer Kori Wingo (Suki Kaiser).

What’s wonderful about creator Marti Noxon and her crew is that as the season has progressed, so has the story for each of the women at the heart of GG2D. In “Rule #92: Don’t do the Crime If You Can’t Do the Time,” there’s a lot of juggling going on. But it’s seamless how everything is woven together and you don’t feel like any one character is short-changed. Let’s break it down preview-style.

The writers also have the ability to peel back the layers of each character in such an interesting way. Last episode, we learned how Phoebe lostÂ a brother who was an addict. Well, get ready to learn even more about Phoebe’s past. But the writers don’t drop all the answers on us at once. They have a knack for leaving us even more curious.

So while you’ll learn more about Phoebe’s backstory. There’s a huge chunk of it that’s left unanswered. And I don’t mind admitting that I really want to know all about it. But I’m willing to be patient because whatever it is, I know it’ll be good. And it’ll mean Beau Garrett will get yet another chance to shine.

Jo’s doing everything she can to make things okay for her kid. Zooey has it difficult right now. Her family is dysfunctional. She’s a bit socially awkward, too mature for her age, she’s in a new city, at a new school, and it doesn’t seem like she makes friends easily.

So Jo gets a high-profile gig at the school, one that puts her front and center with those Mean Girl Moms that do not appreciate Abby’s talents. Jo is a big part of a fundraiser that requires everyone to wear a costume. She also has to come up with a quick excuse of why aÂ big ticket auction item she acquiredÂ is missing in action. A sneak peek:

Jo’s Tale of the Hamburger Phone

I love seeing Jo when she’s in caring mom mode. This episode requires her to put on her mom hat. And leave it on for a while.

We’ve seen how Delia is with her dad. That relationship is complicated. Another complication comes roaring back for Delia. And it’s right when she feels her career is in a good place. There should be no roadblocks to her getting the partnership at her firm, right? Wrong. Necar Zadegan is pretty fantastic as we see DeliaÂ experience everything that life throws at her. The high-powered lawyer isn’tÂ about emotions. But she’s not a robot. She’sÂ at her most intriguing when she’s forced to feel every one of those emotions.

Each of the actresses hits a home run in this episode. As always, Lisa Edelstein crushes a grand slam. She has this way of pulling me in to her scenes like nobody can. Even when I don’t agree with Abby’s choices, Lisa makesÂ me understand them. She makes me feel the character’s emotions which, by the way, run the gamut. And in “Rule #92,” the writer is dealing with some major issues that have to do with her divorce. Can Abby and Jake solidify their permanent separationÂ and wrap it up withÂ a neat and tidy bow?Â If you know this show, you already know what the answer to this question is.

-Remember these lines. I won’t tell you who said them, but they really stood out to me:

“Never let a piece of paper define who you are. I don’t.”

“This is not gonna work if you don’t see me.”

-The costumes at the fundraiser are pretty awesome.