I’ve talked before about how some of the Hallmark movies register immediately and become favorites. I adore the Garage Sale Mystery films, Three Weeks, Three Kids, and Growing the Big One, to name a few. This weekend, Hallmark Channel premieres All of My Heart for Valentine’s Day, and it’s a keeper. Thematically similar to Growing the Big One, the film centers on an aspiring chef, Jenny (Lacey Chabert), who inherits half a house alongside a Wall Street banker she doesn’t know named Brian (Brennan Elliott). 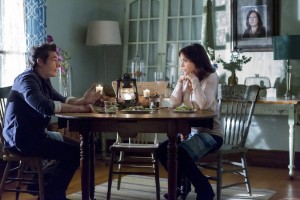 The inheritance is an opportunity for Jenny to seize a lifelong dream, while Brian is just ready to cash it out and move on. She talks him into letting her keep it so she can try to launch a bed and breakfast, but it soon becomes his home, too, when his fancy city job implodes and he has nowhere else to go. Suddenly, two mismatched souls united by ownership of a house strike a friendship and realize the house has been a bigger gift than either could have expected.

I love that Elliott got to do this part. What begins very similarly to his shark persona on Cedar Cove softens considerably as Brian realizes that he likes who he is out of the city, and at Jenny’s side, as they make a go of restoring the house. He and Chabert are very good in this. They have a really lovely, easy chemistry together, and they laugh all the time.

Ed Asner appears as a sidewalk fixture in town who Jenny discovers has ties to her house. Peter DeLuise (consistently solid with his projects) directs a script from Karen Berger. Look for Bitten‘s Greyston Holt in a very different role than you’re used to, plus OUaT‘s Heather Doerksen, Twilight‘s Daniel Cudmore, and SG-1 alumn Paul McGillion in the cast.

I live a life that bridges city and country, and animals are a central part of that, so the movie resonated with me because I understand the draw of both, and I’m so grateful that I have a balance of both. I know how lucky I am. I think fans of Eliiott and Chabert will enjoy the movie, as will folks who maybe long for an idyllic, quiet life away from the busy life we all tend to find ourselves in. Take a two-hour break this Saturday.

I’m so glad Hallmark picked this one to cap their Countdown to Valentine’s Day.

All of My Heart premieres Saturday at 8/7c on Hallmark Channel. You can read our exclusive interview with Lacey Chabert here. The cast and crew will be live Tweeting the film with hastags #ValentinesDay and #AllofMyHeart.

For folks who will ask, the song in the film is “Worlds Apart” by Joshua Radin, published on Glass Bead Music.