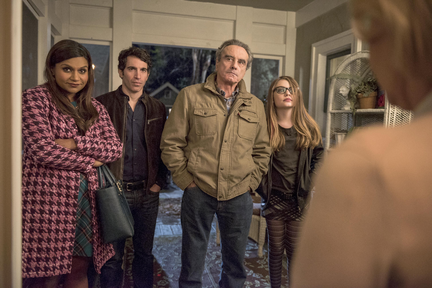 Warning: Spoilers for The Mindy Project

Don’t know how this show does it. But FOX’s The Mindy Project keeps finding ways to surprise us.

Mindy preggers? Totally didn’t see that coming. We actuallyÂ had to process the news. After some contemplation, we’ve decided we’re on board. After all, Mindy Kaling and her crewÂ always manage to make everything Mindy and Danny work. Now all the pregnant doctorÂ needs to do is tell her boyfriend.

But first, she has to deal with Danny’s family. And when they’re around, there’s always drama (and a lot of comedy). Get ready for a Cheers reunion.Â Ever since finding outÂ Rhea Perlman and Dan Hedaya wereÂ going to play Danny’s parents, we’ve been waiting for this moment. The actors who playedÂ Carla and Nick Tortelli are once again playing a divorcedÂ duo. They finallyÂ take up space in the same room.Â Let the vicious retorts and catty comments begin.

Official FOX Synopsis for “Dinner at the Castellanos”:Â Mindy has some big news to tell Danny but, just as she is getting ready to tell him, his father (guest star Dan Hedaya) and half-sister (guest star Madison Moellers) show up for an unexpected visit. The whole crew is invited to Annetteâ€™s house for the worldâ€™s most awkward family dinner in the all-new â€œDinner At The Castellanosâ€ episode ofÂ The Mindy Project.

Quick Teases for “Dinner at the Castellanos”

-Annette makes a big change for the occasion

-Someone refers to Growing Pains and we love them for it

-Mindy doles out a pre-dinner smackdown

The Mindy Project continues to satisfy our need for quality romantic comedies (since we’re not getting them on the big screen). Mindy and Danny are adorable, funny and a bit twisted (in a good way). We’d be extremely sad if they weren’t on our TVs on a weekly basis. So we hope the show gets renewed for another season.