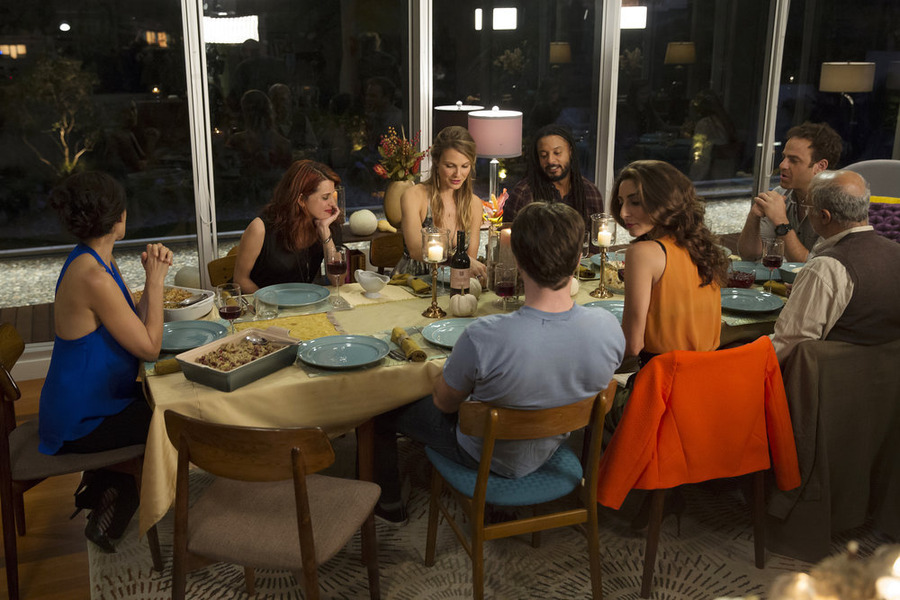 A lot happened in last week’s Girlfriends’ Guide to Divorce. Abby got a permanent gig with HuffPo. We found out Jo’s ex, Rob Frumpkis has another family. In Kentucky. Delia’s commitment phobic ways meant she ended things with Gordon. She also bonded with Charlie/Chad. Jake seemed to be missing the family togetherness of it all. Max told Ford he kissed another guy (and that’s it — nothing else). Phoebe briefly ended her man-cation when she planted a kiss on Marco. Lilly put herself on a slut list to get attention. Oh and an earthquake happened.

At this point we usually get more recappy and attempt to wow youÂ with ourÂ in depth analysis andÂ random thoughts. But right now, we can only think about two things. 1. At the end of “Rule #3: Don’t Stand in the Doorway,” Abby went to Will (Warren Christie). She told him how much of a talented writer he is. And they made up. It was an epic moment. EPIC. This means we will continue to witness their off-the-charts chemistry. Thank you, Show! 2. Bravo renewed Girlfriends’ Guide to Divorce. The series will be back for season two. That means we can relax as we watch the end of this season. Doesn’t that feel good?

Well, hold on to that good feeling as long as you can. Because tonight’s episode is a bit bumpy. On a scale of 1 to 10 the intensity of the drama reaches about a 20. And it all revolves around Thanksgiving. You see, the title of this hour of television is, “Rule #46: Keep the Holidays Low Key.” That’s good advice that doesn’t seem to make its way to Abby, her family and her friends. You have been warned.

Bravo Synopsis for “Rule #46: Keep the Holidays Low Key”:Â Abby (Lisa Edelstein) takes advantage of the kids being with Jake (Paul Adelstein) to throw an â€œAdult Friendsgivingâ€ dinner with new boyfriend Will (Warren Christie). But as strange things begin to happen around the house, Abby and Jo (Alanna Ubach) question whether or not a spirit has decided to join them for Thanksgiving. Phoebe (Beau Garrett) invites Marco (Brandon Jay McLaren) and Delia (Necar Zadegan) gets a surprise visit from her father.

-The show takes a bit of a supernatural turn. Bet you never thought we’d say those words in reference to GG2D, huh? Jo’s wacky solution has its nonbelievers. Shocking but true.

-Did you notice how the synopsis to this episode refers to Will as Abby’s boyfriend? Get used to hearing that word. It’s downright adorable how many times we hear that word in this episode.

-Get ready to find out some backstory on Delia, Phoebe and even Marco (Graceland‘s Brandon Jay McLaren).

-How amazing is this photo?

But don’t worry. Thanksgiving at Abby’s house isÂ not to be missed. Expect yelling, debating, kicking, incendiary opinions and a healthy serving of awkwardness to go along with the poultry and the artichoke dip. Yes, we said artichoke dip.Â Exhibit A (which stands for awkwardness):

-The dialogue in this episode is excellent. Our favorite sentence: “I like your face.”

FUN FACT: Can’t believe this has taken us so long. We keep meaning to mention this little bit of info every time we see his name in the credits. One of the executive producers of GG2D is Robert Duncan McNeill. His producing credits include Chuck, 666 Park Avenue and What About Brian. He’s directed episodes of Chuck, The O.C., The Mentalist and Supernatural. But we will always loveÂ Robert Duncan McNeill — the actor. Back in the day, he was Charlie Brent on All My Children. Lauren Holly (Picket Fences, NCIS) played one of his love interests. Charlie and Julie Chandler were high school sweethearts. McNeill’sÂ biggest primetime job was playing Lt. Tom Paris on Star Trek: Voyager. Love him. 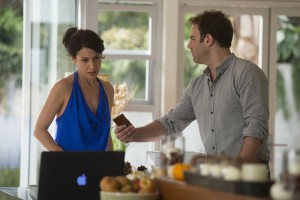 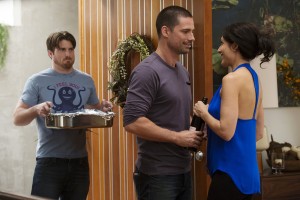 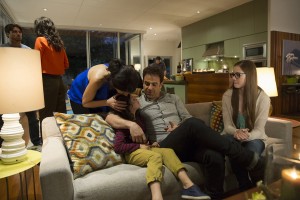 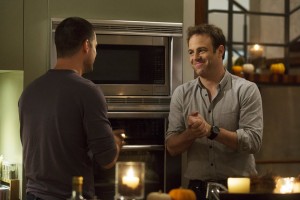 The Mindy Project Preview: "Dinner at the Castellanos"

Justified Preview: "The Trash and The Snake"