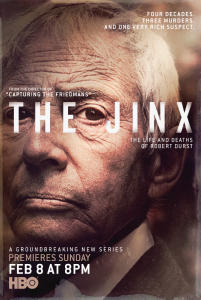 Accused of murdering his elderly neighbor in Galveston, Texas and under suspicion for the disappearance of his first wife almost two decades prior, Robert Durst has long been considered an enigma. When Oscar-nominated filmmakers Andrew Jarecki and Scott Smerling made All Good Things, a filmÂ inspired by one of the most notorious missing persons cases in New York city history,Â they never imagined the subject of the film himself would contact them, much less agree to be interviewed about his life. The Jinx: The Life and Deaths of Robert Durst is a six-part examination intoÂ Durst’s strange history set against the backdrop of unimaginable wealth and privilege

Chapter 1: The Body in the Bay

In this chapter, we revisit Galveston, Texas in 2001. When a dismembered corpse is discovered floating in the bay, the cops follow a trail of evidence that leads to a mute woman named Dorothy Ciner. They soon discover her to be one of Robert Durst’s many aliases and from there uncover his checkered past. He doesn’t even spend 24 hours in jail before he’s out on bail and quickly becomes a fugitive when he doesn’t show up at his arraignment.

Arrested for shoplifting in Pennsylvania — even though he had more than enough money in his possession to pay for the item — and extradited back to Texas, Durst assembles a dream team of (expensive) lawyers. We also meet his outspoken current wife Debrah Lee Charatan, his younger brother Douglas and learn some of the details of the disappearance of his first wife, Kathie. Long suspected of foul play, Durst was never charged and never arrested.

In 2012, Durst contacts Jarecki and Smerling after learning they’ve made a movie about him and agrees to sit down for an exclusive interview.

This is such a strange and fascinating tale. At no point in this episode does it seem like Durst is taking his arrest and/or incarceration very seriously. He seems excited about his prison-issued jumpsuit because he’s never worn one before. When asked about his brother, he insists he’s never made any threats — even though Douglas was scaredÂ enough for his life and that of his family to hire a bodyguard. I can’t imagine what possessed Durst to contact Jarecki and Smerling in the first place, but I can’t wait to hear the rest of this story.

The Jinx: The Life and Deaths of Robert DurstÂ premieres Sunday, February 8th at 8/7c on HBO.

Want to see the first episode for free? Click here.