Rob Lowe is game for anything (Exhibit A: his Direct TV campaign) and tonight he returns to Lifetime in Beautiful & Twisted, a twisty batsh-t based-on-a-true-story tale of murder, mayhem, and madness fueled by ridiculous wealth. Paz Vega and Candice Bergen co-star.

Here’s what to expect: Set against blue-sky Miami in a world of money, privilege and excess, the high-flying millionaire heir to the Fontainebleau Miami Beach hotel fortune, Ben Novack, Jr. (Lowe), marries a stunning stripper, Narcy (Vega). But the coupleâ€™s intense relationship, sparked by fetish and kink, quickly devolves into a marriage in which both lovers inexplicably coexist on love and distrust. When Ben is found brutally murdered, the cityâ€™s elite is shaken to the core, and his mother (Bergen) thinks she knows exactly who was responsible. 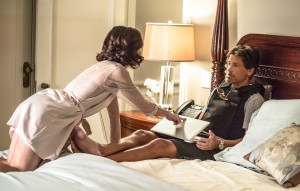 I’m intrigued to see Lowe play the victim when his last stint on Lifetime had him amping up the creep factor as Drew Peterson. I’ll watch him in anything–and I love that he’s had such a long and variedÂ career–Youngblood was on last night and it flashed me back to all those flicks of his I grew up on in the 80s. And yes, it’s bananas that he still has that skin. Dorian Gray is super jealous.

Beautiful & Twisted airs tonight at 8/7c on Lifetime and repeats at midnight/11c. Here are a couple ofÂ sneak peeks.