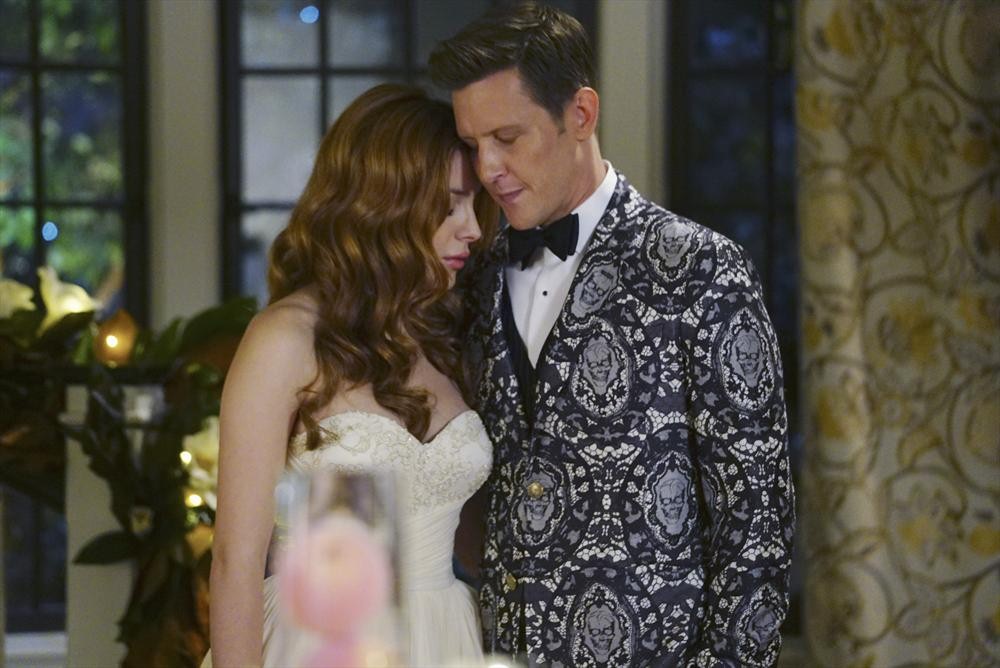 Sundayâ€™s episode is the beginning of a new story arc. Now that things wereÂ solved for David Clarke, what does Emily do with her time? Some thoughts :

-David gives Emily a copy of her real birth certificate but she doesnâ€™t seem happy about it. Â Clearly the girl is now Emily Thorne and doesnâ€™t want to go back. Â Or is it that she doesnâ€™t know how to be Amanda anymore?

-Jack feels super guilty about what he knows. He can’t forget aboutÂ the things he has done — killing Kate, etc. He even quits the force and it looks like he’s going back to bartending. Yes, everyone. Itâ€™s another installment of Poor Jack.

-Emily meets up with Ben for â€œadvice.â€ I am not feeling the chemistry between these two. Itâ€™s like they are being forced together. Maybe itâ€™s because I want her to finally be with Jack.

-Victoria’s Queen Bee status in the Hamptons seems to be slipping. With a special appearance fromÂ The Real Housewives of Beverly Hills castmember, Kim Richards, her so-called friends bail on her for a foundation Victoria is starting in Danielâ€™s name. Remember — everyone thinks that he attacked Emily.

-Victoria also meets the newbie of the Hamptons, Natalie Walters (Gina Torres, Suits, Firefly, Angel). She is the only one that shows up to the event. She definitely has something going on that Iâ€™m sure we will find out about eventually.

-Louiseâ€™s Mom is still trying to keep her conservatorship. HerÂ brother shows her the police report that explainsÂ what happened the night of her Dadâ€™s death. Momma and brother are telling her that they are protecting her because she killed her father. Louise doesnâ€™t understand it. Emily tries to help Louise remember what happened the night her Dad died with some memory technique she learned from her master in Japan. Emily sure did learn a lot of crazy stuff. Louise only sees her Father falling down the stairs. But we know there is more to the story than that.

-Emily throws a wedding reception at the Manor for Nolan and Louise. Between Nolan and Emily, Louise is one lucky Southern Belle. Not only do they find the real police report, they call out the judge, who happens to be there with Louiseâ€™s mom. Louise is now a badass and tells her family they are done and the money train stops here. Apparently it was her Mom that pushed her husbandÂ down the stairs because she was cheating on him with the Judge. Thatâ€™s a lot of balls in the air.

-Victoria shows why she’s the Queen of the Hamptons when she sees her friends at Emilyâ€™s party. She calls them out and gently reminds them about all the secrets she knows about them and then Victoria gets them donate to the foundation. Iâ€™m not sure newbie Natalie is impressed or she is up to something when it comes to Victoria.

-Jack gets a text from Ben asking why he didnâ€™t tell him that Jack was quitting the police force. So instead of calling Ben back he goes to his house and sees Ben and Emily making out. I still donâ€™t get the chemistry and itâ€™s yet another Poor Jack moment.

-Margaux still wants the goods on Emily but what she gets instead is evidence on Jack. Is she really going to let him go down like that?

Revenge hasnâ€™t been renewed yet but since Emily is done and has cleared her fatherâ€™s name, is it time to pull the plug? Or are they setting us up for something bigger? Is Margauxâ€™s revenge justified? New episodes donâ€™t returnÂ until March and it looks like Jack is going to put his heart out there. I still heart Jack. Until next timeâ€¦.

The Strain “Loved Ones”

Juliette in Mourning, Nashville “I’ll Never Get Out of This World Alive”

Once Upon a Time “Ariel”