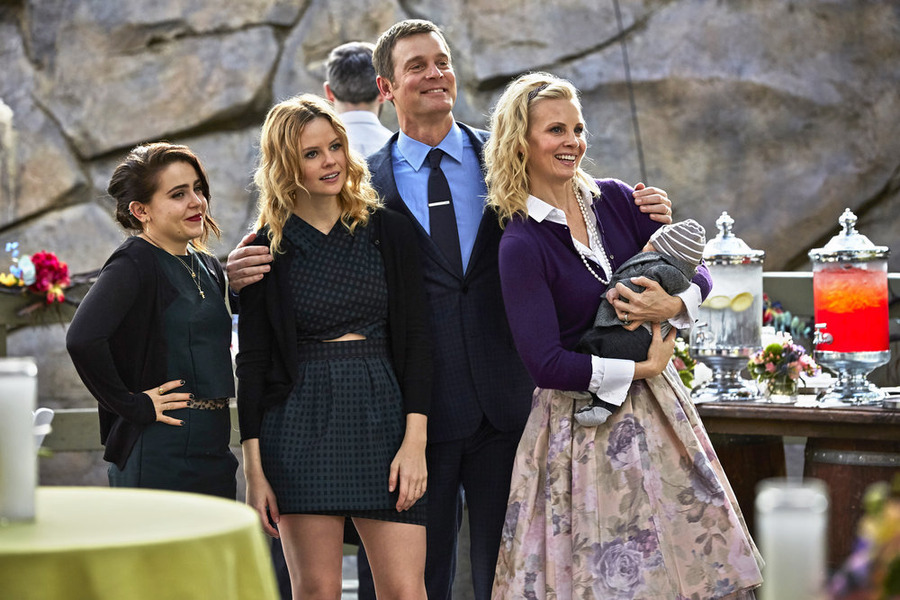 For sixÂ seasons of NBC’s Parenthood, the Bravermans have been making us laugh heartily and cry ugly. And now it’s timeÂ to say goodbye. We’re not ready yet. Are you?

Synopsis for “May God Bless and Keep You Always”:Â PARENTHOOD SERIES FINALE- In the excitement of her big day, Sarah (Lauren Graham) surrounds herself with the original Braverman clan. Meanwhile, Hank (Ray Romano) approaches Zeek (Craig T. Nelson) for his blessing and asks Drew (Miles Heizer) for a special favor. Amber (Mae Whitman) adjusts to life as a new mom with a little help from her grandparents. Julia (Erika Christensen) and Joel (Sam Jaeger) get a phone call that forces a life-changing decision. Max (Max Burkholder) gets his first job, while Crosby (Dax Shepard) and Adam (Peter Krause) reach an understanding about the Luncheonette. Kristina (Monica Potter) presents Adam with a new plan for the future of Chambers Academy, and for their family.

It’s going to be hard to say goodbye to this show. Tears have already fallen after watching the quick promo above. And fair warning — more than a tear or two may descendÂ after playing the clip below. One of the big stories for the Parenthood series finale is Sarah’s wedding to Hank. After seeing everything Sarah has been through, she deserves happiness. It’s only fitting this show ends with her finding someone to make her happy forever. Here, Hank finds the courage to visit Zeek and the two have a man-to-man talk. We’re even more in love with Zeek overÂ hearing howÂ he describes his Sarah to Hank.

Kristina has her school. Jasmine’s teaching dance. Sarah’s marrying Hank. Amber has a new baby. Camille’s creative outlet is her painting. Joel and Julia are back together (YAY!). Now we truly hope both Adam and Crosby get what they want in life. Crosby knows exactly what hisÂ passion is (music) but he doesn’t quite know how to make it happen. Adam can get things done but he doesn’t know what’s going to make him happy career-wise for the rest of his life. Continuing to work together at The Luncheonette would be great. But only if they were both in it for the right reasons.

Meanwhile, someone else who deserves something good in their life is Max. He has a great family. For that he’s lucky. But he’s been through so much in such a short time. Well, it seems like thingsÂ finallyÂ goes his way in the series finale. He’s found his true calling. He doesn’t have to be one of the 85% in the autistic community that can’t get a job. He already knows what he wants to do with his future. And that’s so satisfying on every level.

Amber named her son, Zeek. A touching tribute to theÂ grandfather she connected with so well, especially in the last couple of seasons of Parenthood. Will Amber remain a single mom? According to NBC, Matt Lauria will be a part of this series finale. Maybe there’s still a chance for Amber and Ryan to get back together or at least for him to meet his son. Also returning for the final episode is Amber’s cousin, Haddie (Sarah Ramos). And it’s about time.

Parenthood is a show we’re thankful for big time. Like we said earlier, it’s made us laugh, it’s made us cry. It’s annoyed us. We’ve been in awe of it. WeÂ have thoroughly enjoyed watching the Bravermans experience the good times and the bad ones. Yup, we’re not ready for this show to be over. Even the title of the episode makes us want to weep. But even after it’s gone, we’ll always remember Parenthood fondly. We’llÂ think ofÂ it as one of the best family dramas to ever grace our small screens.

Grab a couple boxes of Kleenex. The series finale for Parenthood airs tonight at 10/9c on NBC.

The Cast Reflects on Parenthood

The Dark Charlie Rises, Supernatural "There's No Place Like Home"

Previewing Don’t Forget I Love You