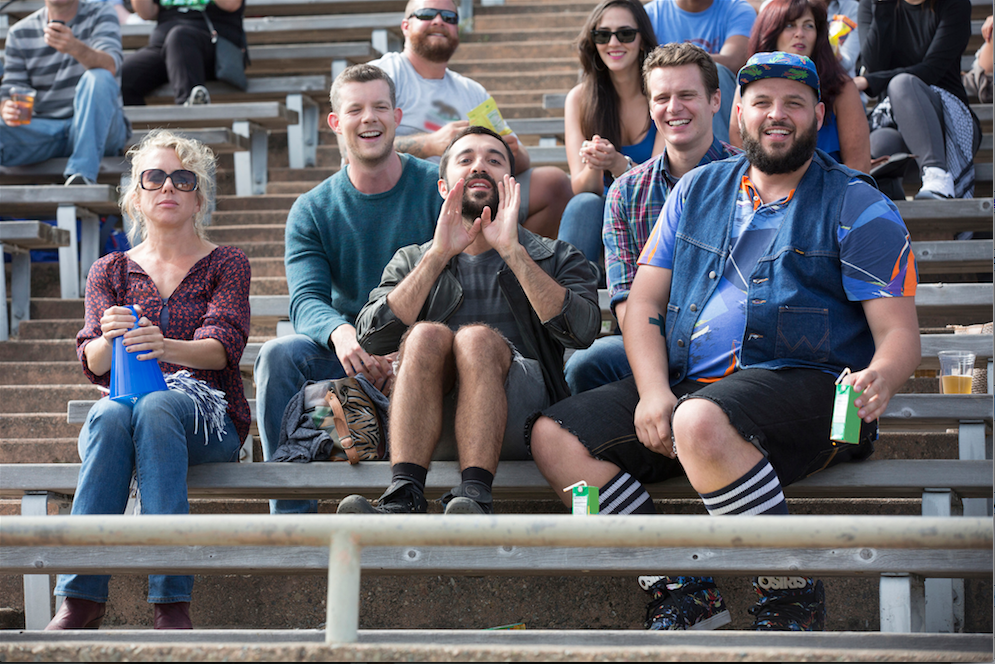 AgustÃ­n’s self-destructive ways put him in a very bad place in last week’s episode of HBO’s Looking. Dom’s open relationship with Lynn meant having to answer questions about whether he slept with someone when he went to Russian River with the boys.Â Thanks toÂ AgustÃ­n, Patrick and Richie reconnected. Patrick struggled over his affair with his boss. Plus, his paranoia over his rash resulted in him taking an AIDS test. The cutest moment from “Looking for Results?” Kevin’s choreographed Take That dance (Robbie Williams FOREVER). That was a rewind and repeat moment for sure. Now let’s get to our rugby-fied preview ofÂ this week’s Looking.

Synopsis for “Looking Top to Bottom”:Â Patrick gets ready for his first official overnight with Kevin, whoâ€™s also agreed to attend Domâ€™s rugby match â€“ though Kevin doesnâ€™t want Patrickâ€™s friends to know they are seeing each other. AgustÃ­n visits Richie to make amends and thank him for the night before. At breakfast with Doris and her new fling, Malik, Dom questions whether Lynn fully supports his dream of opening his own restaurant.

-Patrick has plans to go to Dom’s first rugby match. But Kevin provides a possible glitch to these plans. A sneak peek:

-AgustÃ­n rebounds big time from last week’s drugged out mess of a situation. He has to ask for help fromÂ his new Russian River friend, Eddie (Daniel Franzes). And he does something else that’s surprisingly grown up.
-We get to see more of Doris and her new man, Malik (Bashir Salahuddin).
-There are cracks starting to develop in Dom’s relationship with Lynn. This episode does not change that.
-Kevin and Patrick’s 28 hours of weekend bliss includes a trip to Dom’s rugby match…as “friends.” A sneak peek:

–Shallow TV Alert: Because ofÂ Dom’s rugby pursuits, there is a shower scene, boys and girls. You’re welcome for the heads up.

Relationship Recap: The evolution of Tina and Alex (so far), Togetherness "Insanity"