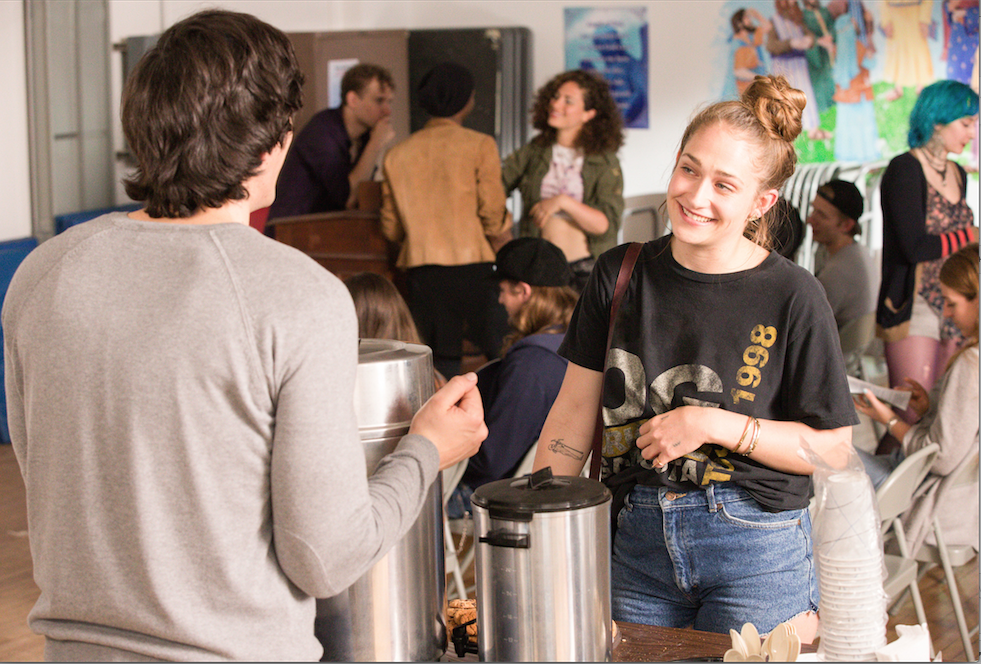 During last week’s episode of Girls, the focus was squarely on Hannah and grad school. This week,Â some of the action takes place in Iowa. But we also find out what’s going on with the other charactersÂ in New York. As usual, there’s a lot of drama in this HBO comedy.

Synopsis for “Female Author”: With only one class a week, Hannah finds herself doing a lot of nothing in her free time, while a visiting Elijah (Andrew Rannells) has become the social butterfly of Iowa. Ray (Alex Karpovsky) gives Marnie a wake-up call about Desiâ€™s true intentions before their meeting with a record label. Shoshanna aces, then blows, a job interview. Adam unwittingly gets drawn into Jessaâ€™s chaotic web after an AA meeting. At a poetsâ€™ party in Iowa, Hannah rants about the undue expectations put on women writers, and takes things too far in critiquing her classmates.

-Professionally, things are looking up for Marnie and Desi. Personally — it’s a different story. Marnie’s a bit delusional about what’s going on between her and her singing/songwriting partner.
-Ray has no problem in telling MarnieÂ like it is. In season one, Ray was kind of unlikable. In season four, he has evolved so much he’s become a solid voice of reason. And not only when it comes to Marnie. Go. Ray.
-Oh to live in Shoshanna’s world for just five minutes. Her interviewing skills aren’t that bad. Her life skills could use a little work. It seems like she may haveÂ a big picture plan for herself. One that she refuses to derail when something that doesn’t quite fit into that plan comes along. She needs to learn to be flexible. But damn is she hilarious. Wish the show would let us see even more of a glimpse into her quirky life.

-Favorite scene of the entire episode belongs to Adam and Jessa. The two interact a lot and it results in some fantastic stuff from Adam Driver and Jemima Kirke. Something happens that’s a long time coming. And we get an actual vulnerable moment from Jessa.
-Andrew continues to amaze with how well he can adapt to any situation.
-Adam is on Hannah’s mind. And for the record, we’re on Team HannahÂ when she decides to critique her classmates.

The Black Sails' Cast and EPs Talks Season 2 and More