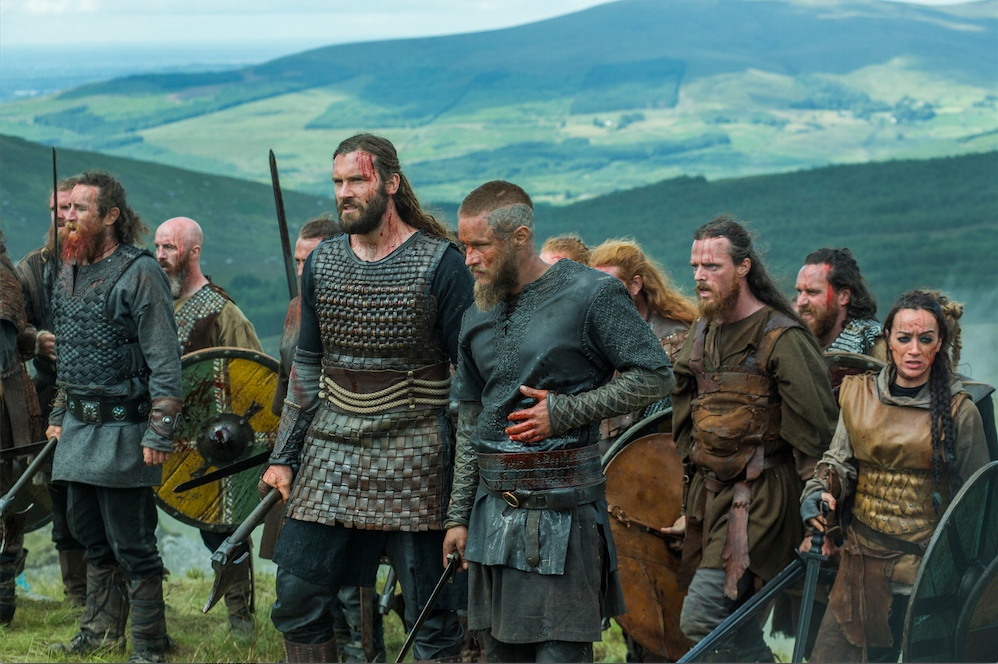 All hail King Ragnar! There’s less than a month until new episodes of Vikings invade our small screens. So, here at TV Goodness, we feel this is a good time to begin our countdown. HISTORY recently released a new trailer. As usual, the action that’s about to headÂ our way is intense, brutal (our favorite word when describing this show) and glorious.

A Season 3 Synopsis from HISTORY:Â With the promise of new land from the English, Ragnar leads his people to an uncertain fate on the shores of Wessex. King Ecbert (Linus Roache) has made many promises and it remains to be seen if he will keep them. But ever the restless wanderer, Ragnar is searching for something moreâ€¦and he finds it in the mythical city of Paris. Rumored to be impenetrable to outside forces, Ragnar and his band of Norsemen must come together to break down its walls and cement the Vikings legend in history.

The gripping family saga of Ragnar, Rollo (Clive Standen), Lagertha (Katheryn Winnick) and Bjorn (Alexander Ludwig) continues as alliances and loyal friendships are questioned, faith is catechized and relationships are strained. VIKINGS tells the extraordinary tales of the lives and epic adventures of these warriors and portrays life in the Dark Ages, a world ruled by raiders and explorers, through the eyes of Viking society.

According to HISTORY, these are the new characters this season:

Kalf (Ben Robson) â€“ Lagerthaâ€™s young, handsome second in command. She is fond of him and trusts him to look after her affairs while she is away, but it is possible that Kalf is more ambitious and calculating than he appears.

Harbard (Kevin Durand) â€“ A wanderer who turns up unexpectedly in Kattagat when Ragnar and most of the men of the town are away raiding. Harbard will have a profound effect on Queen Aslaug, Siggy and Helga, all of whom have had the same dream, presaging his arrival.

Emperor Charles of France (Lothaire Bluteau) â€“ A complex, troubled and powerful man who views battling the Vikings as spiritual and earthly.

Princess Gisla (Morgane Polanski) â€“ The daughter of Emperor Charles and a beautiful, young woman of considerable courage and resolution.

-How cool is it that Kevin Durand (Dark Angel‘s Joshua, Lost, The Strain)Â is joining the show this season? Vikings always manages to secure the talents of some fierce guest stars (i.e. Gabriel Byrne, Donal Logue, Linus Roache etc.). We are looking forward toÂ his presence.

-Turns out Lothaire Bluteau is a veteran of TV having guest starred on Miami Vice back in the day. He was also in season 3 of FOX’s 24; he played Ambassador Charles de Marillac on Showtime’s The Tudors; and over the years, he’s appeared on Law & Order: SVU three times playing three different characters. He’s also been on Law and Orders: Criminal Intent and Trial by Jury.

-As for Morgane Polanski, if her last name sounds familiar, it should. Her dad is Roman Polanski. Her acting credits includeÂ the movies The Pianist, Oliver Twist and The Ghost.

Wonder how this show is going to top crucifixions, blood eagle executions and Lagertha becoming an Earl. We’re about to find out. Vikings returns with new episodes Thursday, Feb. 19 at 10/9c.