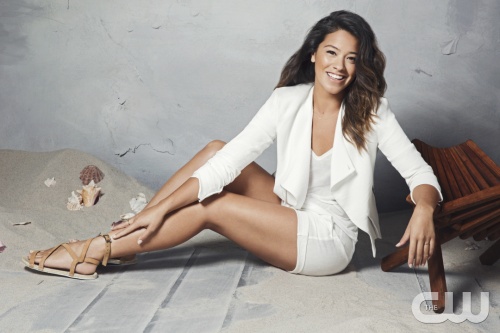 It feels so incredibly good to be Jane the Virgin fan, doesn’t it?

Gina Rodriguez recently beat out Julia Louis-Dreyfus and Edie Falco to earn a Best Performance by an Actress in a TV Comedy Golden Globe. We continue toÂ celebrate her much deserved win.

At the recent Television Critics Association Winter Press Tour, the CW’s President, Mark Pedowitz, announced an early renewal for Jane the Virgin. The show will get a second season.Â This clearly means the network has confidence in Jane and fans will not have to experience that oh so cruel “will it or won’t it come back” scenario that often accompanies shows that receiveÂ critical acclaim but lack a little bit in the ratings department. We can watch the rest of season one in peace.

All season long, the producers/writers/actors have continued to provide an entertaining mix of comedy, drama and telenovela-style melodrama in a way we’ve never seen before. The show has the ability to take classic soap opera cliche’s and make them fresh again. We don’t know how they manage to do so but the quality has yet to waiver. And that goes for tonight’s brandÂ new episode.

Official CW Synopsis for “Chapter Ten”:Â WHEN IT RAINS, IT POURS — As a hurricane rips through Miami, Jane (Gina Rodriguez) is forced to stay at the Marbella, but the storm soon becomes the least of her concerns. When Rogelio (Jaime Camil) hears about Alba’s (Ivonne Coll) condition, he rushes to Xo’s (Andrea Navedo) side at the hospital to comfort her. Rafael (Justin Baldoni) is reinstated as boss, but he is soon faced with a difficult decision regarding layoffs at the hotel. Meanwhile, Michael (Brett Dier) helps Alba, but does his best to keep it a secret. Yael Grobglas also stars. Elodie Keene directed the episode written by Meredith Averill and Christopher Oscar PeÃ±a (#110).

The hurricane, of course, comes at the worst time for our favorite characters.

-Alba’s in the hospital after Petra’s nasty mom pushed her down the stairs. Jane feels helpless and you know she’s not going to sit there and wait for her abuela to wake up. She’s going to take action.
-With her mom in the hospital, Xo makes a hasty promise. One that may be difficult to keep.
-Rafael takes advantage of the inclement weather toÂ step up at the hotel. But that means having to make some tough decisions. Decisions that putÂ him in direct conflict with Jane. The conflict resolutionÂ causes JaneÂ to realize something about herself.
-The episode has fun with another classic soap opera cliche. It brings two characters together that haven’t had a lot of face time as of late. See for yourself:

The winter hiatus is over!Â Jane the VirginÂ returns tonightÂ at 9/8c on the CW.