Hallmark Channel brings its A game this weekend with Bridal Wave, a Countdown to Valentine’s Day romantic comedy starring Arielle Kebbel and Andrew Walker, who previously co-starred in A Bride for Christmas. It’s a super-sweet film about knowing when to put the brakes on the plans you made to keep other people happy.

Georgie (Kebbel) is a nurse for her plastic surgeon fiancé (A Cookie Cutter Christmas‘s David Haydn-Jones), and her mom (Colleen Wheeler) is over the moon about their impending nuptials. His mother, Felice, played by Jaclyn Smith, is decidedly not happy about it.

Once they retreat to a seaside resort to have the wedding, Georgie realizes her one cold foot has turned into two, especially after meeting Luke (Walker), a former architect who abandoned city life for the island before it became a conveyor belt of weddings 365 days a year (although nobody in the movie asks him my burning question about what he actually does for money since he turns down freelance gigs).

He’s drawn to Georgie and is flirty but doesn’t cross a line, and it dawns on her that she’s had more of a spark with him in 24 hours than in the four years she’s worked alongside her soon-to-be husband. So she has to make a choice.

I loved it. It’s just an honest and kind story about a woman trying to do the right thing for everybody but herself and realizing that doesn’t make a life. There are no villains, which is super-refreshing. Y’all know how I feel about Walker, so that’s a no-brainer. Kebbel is a gem.

Writers Neal and Tippi Dobrofsky continue their streak–Surprised By Love was theirs, and they’ve penned several other films for the network plus When Calls the Heart. Frequent Hallmark director Michael M. Scott takes the reins. The movie filmed at the Oak Bay Beach Hotel in Victoria, British Columbia, and I defy you to not to be scouting airfare by the second hour. 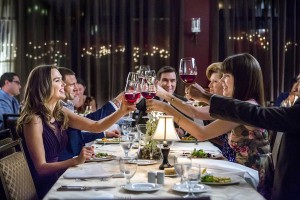 Bridal Wave premieres Saturday at 9/8c on Hallmark Channel and runs throughout the month. Here is a sneak peek. In case you missed it, check out our exclusive interview with Arielle Kebbel here.