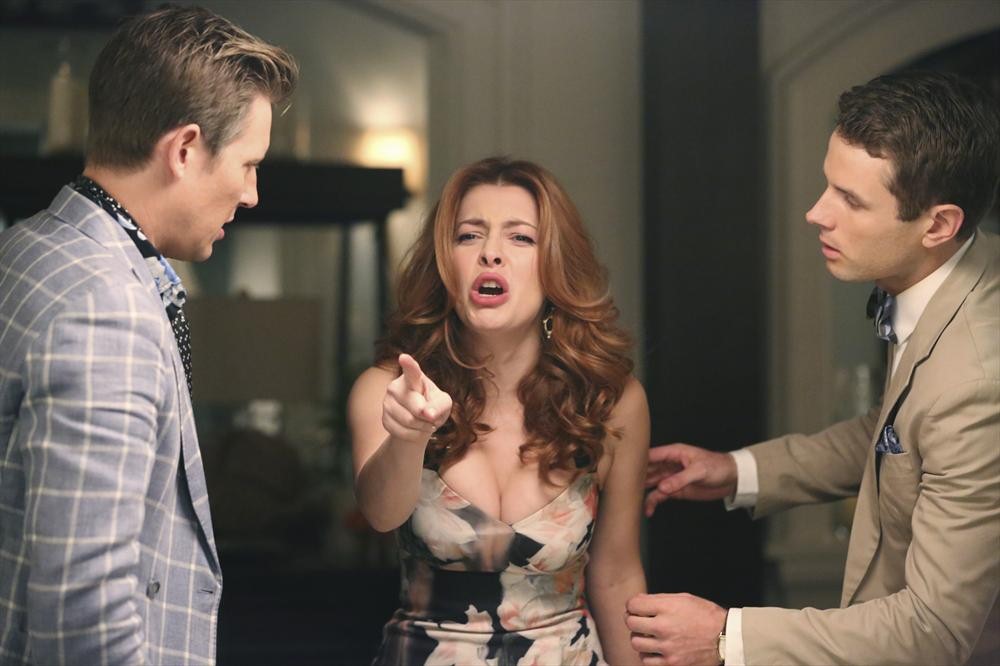 The preview for this weekâ€™s episode kept saying, â€œShe doesnâ€™t see it coming.â€ Â Well EmilyÂ didnâ€™t but we will get to that. The aftermath of Danielâ€™s death is still having a ripple effect in the Hamptons and now Malcolm Black is causing some serious havoc. Â Here are some thoughts on what happened:

-I know I say this a lot but poor Jack! Heâ€™s about to go off to work when Malcolm Black shows up after being presumed dead. But we all knew better. Now Jack has to ship his poor kid, Carl, out of town to be safe with cousins. These cousins must be good people because this isnâ€™t the first time Jack has had to send Carl away from danger. Forget Jack. Poor Carl!

Second — not sure what his deal is yet. Third, does he know that the medication his sister is taking is actuallyÂ a drug that causesÂ her too see things that arenâ€™t there? Like her mother, played by the great Carolyn Hennesy (Diane from General Hospital, Rosalyn from True Blood). I honestly didnâ€™t see this coming. Maybe Iâ€™m losing my touch!

-Nolan might actually be right about one of theÂ people he gets involved with. Or is Louise still more than meets the crazy eye?

-Margaux remains pissed at everyone about Danielâ€™s death. Interesting that she passes out at the police station in front of Ben, the overzealous, wannabe detective. And then Victoria decides to tell Margaux the whole truth about Emily, with the door of Margauxâ€™s hospital room wide open. Oh, look thereâ€™s Ben standing and hearing the whole conversation. Iâ€™m telling you. What I said last week about Ben has got to be true. How does Malcolm know Amandaâ€™s alive?

-Emily convinces her Dad not to kill Victoria. The show would kind of suck without that character. I mean, to kill off Daniel is one thing, but getting rid of Victoria is a whole other issue. Victoria and Emilyâ€™s relationship is the heart of the show.

-Another installment of Poor Jack: He thinks he’s doing the right thing by getting the drive with the evidence against Malcolm Black and having the police show up where David is set to kill Malcolm. Even I knew that wasn’t a good idea. This Malcolm character is really bad news.

-Remember last week when Louise stole the picture of Emily that Victoria sent to Kate, the FBI Chick aka Malcolm Black’s Daughter? The moment that Emily finds the picture in Louise’s things she knew Victoria had sent it. Of courseÂ Emily was going to confront her rival in a dramatic way but who knew how dramatic it actually was going to be. Victoria goesÂ on and on about how it’s Emily fault that Daniel had been killed. She’s such a hypocrite! (But we always knew that about her, amiright?)

-As Emily and Victoria go at it, something shoots them both and then the scary Malcolm Black kidnaps them. That’s what EmilyÂ didnâ€™t see coming. UsuallyÂ the girl has her bases covered.

Okay, so Emily and Victoria are in trouble. What is going to happen to these enemies? We know they will survive but how will they get out of their situation? Will they be forced to work together? Is the Sheriff really dead or will he be locked up with them as well and find out the truth about Amanda? What will David do when he finds out that Malcolm is holdingÂ the ladies hostage? Heâ€™s definitely going to be upset and then he is going to tell Jack that he needs to start listening to him. Will Carl get to ever come home? Â There are so many questions. Until next week.