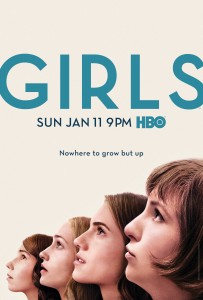 It’s time to check back in with the girls of HBO’s Girls. The fourth season of the much buzzed about and much analyzed series finds Hannah packing up and preparing to leave the Big Apple for greener pastures.

Official Synopsis for Season 4: Hannah has left New York to attend the prestigious Iowa Writers’ Workshop, hoping to become a more serious writer, while facing uncertainty in her relationship with Adam. Back in the city, Marnie is pursuing a music career, trying to balance her personal and professional relationship with Desi. New graduate Shoshanna is interviewing for jobs and struggling to sort out her relationship with Ray. And Jessa is trying sobriety through AA, but her knack for creating drama is undiminished.

Hannah (Lena Dunham): It’s great that she’s decided to do this workshop for herself and her career. It’s a grown up decision with grown up consequences. Which means, she has to leaveÂ Adam behind. And in this world of Girls, things tend to go terribly, terribly wrong. In the premiere episode, Adam (Adam Driver) continues to be a master brooder, especially when it comes to his acting career. Hannah grounds him in a weird way. Without her presence, what will he do? How will he act out? Will Hannah and Adam’s relationship survive the long distance? There will be drama. There has to be. The other question for Hannah is whether she’ll be able to succeed in this new environment. She’ll struggle for sure, but hopefully, she’ll figure things out and flourish. Hopefully she’ll be able to stay strong in Iowa and not run back to New York City and her friends at the first sign of trouble and doubt.

Marnie (Allison Williams): Marnie is focusing on her music career, but she’s also sleeping with Desi. Who has a girlfriend. Don’t think things are going to go well on the personal front. And if she wants things to get better professionally, she’s going to have to toughen up. Elijah (Andrew Rannells) gives her some much needed advice in the premiere. Hopefully, she’ll take it to heart. She better watch out for her heart. Triangles are messy.

Jessa (Jemima Kirke): In the premiere, The Jessa/Beadie matterÂ is resolved fairly quickly. So we’re definitely wondering what’s next for her. She’s back in New York and something tells us that she’s going to find herself in the middle of some sort of dramatic event sooner rather than later. This is Jessa we’re talking about.

Shoshanna (Zosia Mamet): ShoshannaÂ is done with school and ready to face what the world has to offer. In the premiere, she definitely deals with the Ray situation. And we meet her parents (SNL‘s Ana Gasteyer and ER‘s Anthony Edwards). Let’s just say that after meeting Shoshanna’s parental units we can’t believe she’s not more of a mess than she already is. It’s definitely going to be interesting to see what adventures our favorite Girls character will stumble into as the season continues.