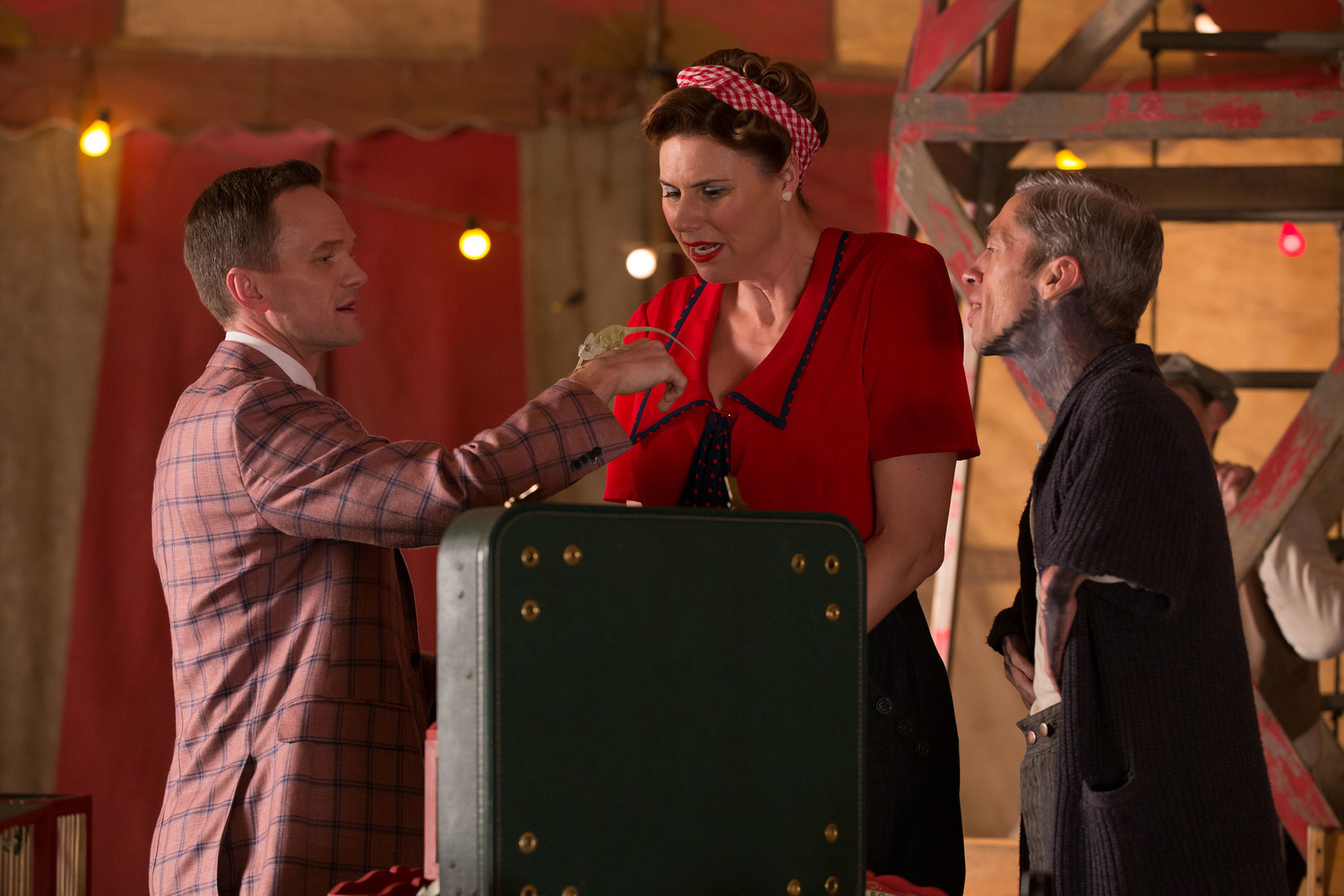 Here we go, American Horror Story fans! We’re in the final stretch of episodes, and I have no idea how this season is going to come to an end. Is this a bad thing? Yes and no. Before we get into my reasoning for seeing both sides, let’s discuss “Magical Thinking” and the introduction of Chester, aka Neil Patrick Harris, akaÂ the most fun person to watch ever.

Normally I wouldn’t care for the introduction of a new character so late in the game, but there’s something about Neil that makes you forgive Ryan Murphy for his spastic storytelling tendencies. Dot and Bette are united now after realizing they are stronger together than trying to find a way to be separated. They’ve also given into the freaks’ ideas of pleasure. This means finding someone to take their virginity.

No surprise they chose the charming Chester. If only they knew how deranged he actuallyÂ is. The second he pulled out Marjorie, the dummy, you knew he was going to talk to her like a real person. It’s very rare we get so much insight into a character this fast, but the show is pressed for time. We learned that after Chester came home from the war, his wife had fallen for her best friend, and proceeded to have sex with her as he watched, impotent, with Marjorie by his side.

There’s already some debate about whether Chester is purely crazyÂ and thinks Marjorie is real, or she is in some sort of “Chucky” doll situation. I highly doubt it’s the latter. Chester is clearly mentally unstable and hallucinates that Marjorie is real. He genuinely believes it was Marjorie who killed his wife and her lover. In reality, he was the one to murder them.

If the sex scene between Chester and the twins wasn’t already creepy to start with, he needed to add Marjorie into the mix in order to rise to the occasion. I was very impressed by the filming choices in this scene. The cameraÂ showing both Bette and Dot’s reactions to their first sexual encounter was a nice touch (pun completely intended!).

Unfortunately our favorite psychopath, Dandy, has been keeping tabs on “his” twins. It’s so hard to read Dandy sometimes. Does he actually love Bette and Dot, or did he just cry because someone else got ahold of what he thinks belongs to him? No surprise he handled the situation by stealing Marjorie and forcing Chester to look like a looney in front of everyone. I just can’t tell if he intended for Chester to think Marjorie wants him to kill the Tattler twins. Damn, that Marjorie is demanding: top billing and murder!

I thoroughly enjoyed watching Neil’s performance in this episode.Â I like that he can go from playing the womanizing, yet charming, Barney on How I Met Your Mother, to the creepy, insane Chester on American Horror Story: Freak Show. Not to mention his disturbing turn as Desi in Gone Girl. Maybe Neil should keep playing creeps because he’s oddly good at it.

The other major storyline in the episode centered around Jimmy losing his hands to Stanley. Can I just put it out there that I needÂ Stanley to die a horrible death by season’s end? Poor Jimmy lost both hands, and was left to rot in prison. Thankfully, Dell and Amazon Eve teamed up to help free him. Sadly for Dell, Maggie spilled the beans of his killing of Ma Petite to Desiree and Elsa. I was a little surprised Dell was killed in this episode, but all Elsa needed to hear was that he did it before putting a bullet through his head.

So where are we headed these last two episodes? Chester is crazy. Dandy is a psychopath. Jimmy has been sprung. Stanley is out there selling Jimmy’s lobster hands. Elsa is heading to Hollywood. The main problem with this season is there doesn’t seem to be any build up to anything. Even though I hated last season (AHS: Coven), there was a least a question that needed to be answered: Who would become the next Supreme? In this season, I’m not sure what over-arching question we need answered.

On the flip side; I love the atmosphere and characters this season. It feels a lot more creepy than last season, which seemed to want to be a comedy instead of a horror show. I am genuinely curious what will happen to these characters. I also think this season has a clearer symbolic message than last season. This season is all about discovering who the true freaks are. They aren’t necessarily the ones who like them. It’s the ones who seem normal, but are the real monsters inside. I still have no clue what last season’s message was: Moms suck?

– Will Jimmy live to run away with Maggie?

– When will the Jupiter police force get their comeuppance?

– Will Dandy ever be caught and brought to justice for his murders?

– Will the Tattler sisters be separated against their will?

Once Upon a Time “Poor Unfortunate Soul”

Arrow Reveals: Clues for the Future?