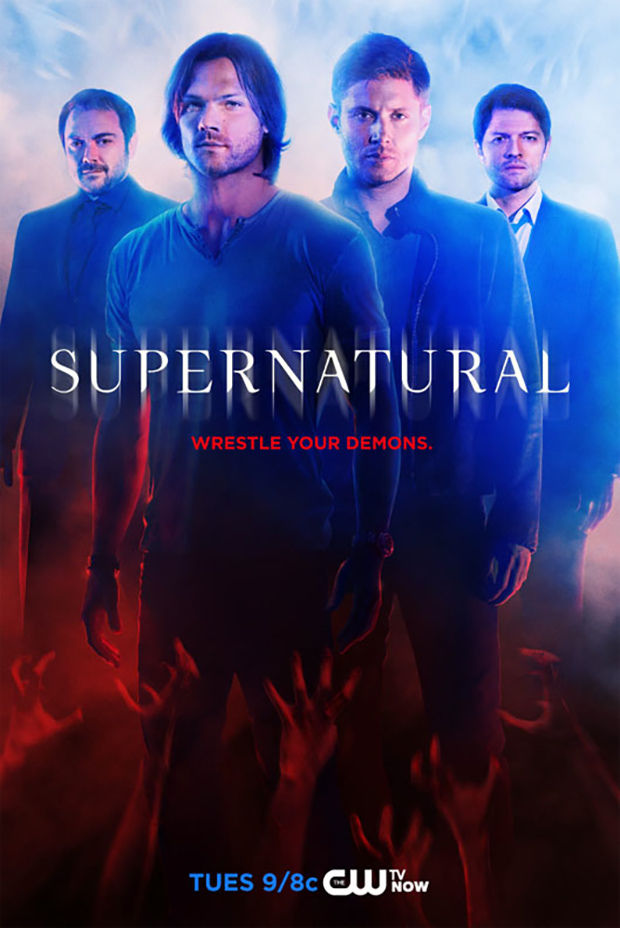 I just can’t let this year go without giving thanks to the foursome at the heart of the CW’s Supernatural. In 2014, the longtime CW series ended its ninth season with an exciting storyline (Demon Dean); kicked off its tenth season and celebrated its 200th episode. Along the way, the four (S10) series regulars entertained the masses on TV, at conventions and on social media. Jensen Ackles, Jared Padalecki, Misha Collins and Mark Sheppard continually made me remember why I am still a card-carrying member of the SupernaturalÂ fan club. Just a few of the greatest hitsÂ from 2014:

January: The first two episodes of the year were mighty epic. First, we finally got the younger Winchester bro back after a half season of Jared fabulously playing a Sam / Gadreel hybrid. It was great to see Padalecki take on another version of his character. But, I have to say, that I was very happy “Road Trip” officially ushered the Sam we know and love back into the world of the Winchester family business.

And then in the follow-up episode, “First Born,” a desperate and depressed Dean snagged a mythology all his own when he received the Mark of Cain. By now he’s probably regretting not asking Cain about the side effects and the specific consequences that come with carrying the Mark. He was in a bad place so he didn’t think about the big picture. Despite the hell that this is putting Dean through, I can’t complain because it’s resulted in some more great Jensen Ackles performances.

In other news, the fandom made its voice heard loud and clear when it voted Sam, Dean and Castiel Favorite TV Bromance inÂ the People’s Choice Awards.

May: Everyone predicted the cliffhanger for the season 9 finale, “Do You Believe In Miracles.” But it didn’t matter. When Crowley gave that dramatic end-of-the-episode monologue then Dean opened his eyes and they were black — it was a shocking sight to behold. No two ways about it. For me, itÂ was one of the most memorable sights of the 2013 – 2014 TV season. One of my favorite parts of the entire thingÂ was the fact that so manyÂ fans recorded their reactions to that moment. Those were almost as entertaining as the last ten minutes of the finale.

Also, this happened at the CW Upfronts in May. And we rejoiced.

July: Season 10 started production with Jensen directing his fourth episode. The Supernatural cast and EP once again traveled to Comic-Con to talk up the new season and answer questions about the previous one. My favorite reply happened during Jared’s round table interview with a group of bloggers (including TV Goodness). I asked him whether the Sam we were about to get at the beginning of season ten was anything like the Sam we got at the end of Season 3’s “Mystery Spot.” Loved Jared’s reply: (@ 1:56)Â  Â

August: For Supernatural fans, Jensen joining Twitter is a big deal. It happened at the Salute to Supernatural‘s Vancouver Convention where with the help of Jared and the fans, Jensen made his first tweet.

Ever since we’ve gotten some pretty epic photos from the boys. Things like Lonely Jensen:

And then Jared’s brilliant response

And can’t forget this…

I’m not EXACTLY sure what happened here, but I’m MOSTLY sure we lost a bet somehow. #SupernaturalChristmas pic.twitter.com/DhX6hIPNAu

Now all four season 10Â series regulars are on Twitter. Sometimes they even live tweet episodes. And we fans are forever grateful. Bonus points for Jensen now keeping up his Facebook page, too. September: With the release of the Season 9 DVD came something special. Misha Collins co-wrote and directed a mockumentary of life on the set. Behind the Scenes of Supernatural: A Fan’s Perspective was simply glorious. We got Overlooked!Misha; fragile, Tai-Chi, organic food-loving Jensen; and self-centered, workout-obsessed douche-y Jared. It was all in fun and it was a gift for fans. The Supernatural cast and crew knows what the fans love and this definitely falls in that category. I don’t know how they’re ever going to top this mockumentary. It was an instantÂ classic.

October: Season 10 kicked off with an awesome Supernatural retrospective plus three episodes that played with the Demon Dean mythology. I’ve gone on my boo to Demon Dean being cured in three episodes rant before, so I won’t go into it again. Despite all that, “Black,” “Reichenbach,” and “Soul Survivor” provided some enjoyable moments, which is why many of us were sorry to see Dean cured so quickly.

November: Supernatural celebrated its 200th episode with a Fan Party and an emotionally satisfying hour of TV called “Fan Fiction.” I didn’t think I was going to like the Supernatural musical as much as I did. But the songs were catchy, clever and highly downloadable. I dare you to listen/watch “Carry on Wayward Son” and not tear up. So much emotion in that one song that has become important to this fandom. Hearing the female voices sing this track gives me chills. And how cool is it that word got back to the band that made it famous?

Jensen and Jared were total troopers and gave it their all during an episode that was just plain fun.

December: The mid-season finale (“The Things We Left Behind”) featured a great Dean/Cas/Sam scene with aÂ wonderfulÂ story about John “Friggin'” Winchester and it ended with the return of Dark Dean. I hope the new year brings more goodness.

As far as I’m concerned, Jensen, Jared, Misha and Mark were the rock stars of the CW this year. We learned even more than ever before thatÂ they are as passionate about their show as the fans who watch it every week.

The Comeback Season Finale Preview: "Valerie Gets What She Really Wants" [VIDEO]

Nikolijne Troubetzkoy Talks Killjoys “Blame It on the Rain” [Exclusive]