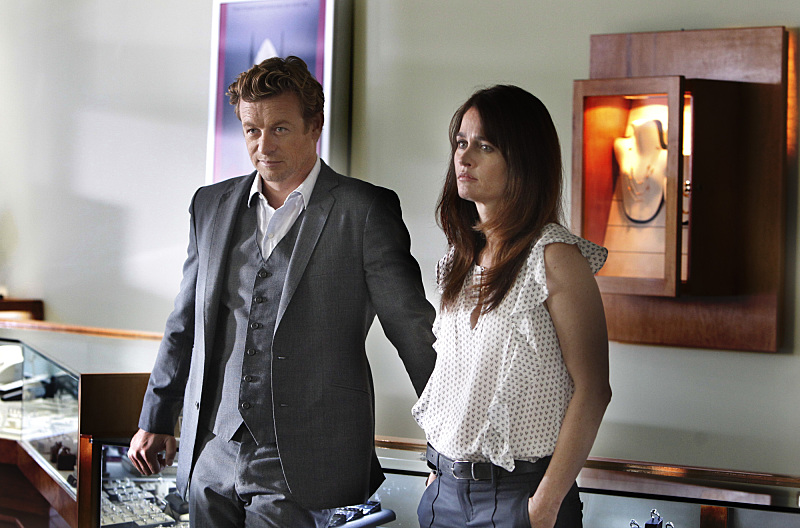 Patrick Jane called in sick â€“ really? Iâ€™ve been sick. Is this a coincidence? I do consider Simon Baker, my Sunday night boyfriend; therefore, Iâ€™m going to say yes, at least in my fantasy world! In reality, it had to do with the timing of the episode. I know the difference between fantasy and reality. Seriously â€“ I do! Look, Iâ€™ve been crushing on Simon Baker for years.

Back to the episode. You are not seeing things. Cho is smiling in the picture. It was tough for him. Donâ€™t be fooled, it was all part of an undercover operation. Cho and Lisbon posed as a newly engaged couple. In fact, Cho had to buy Lisbon a giant diamond ring. At first, I thought it was Jane giving Lisbon the ring, but no such luck, at least not yet.

As the team investigated a murder linked to a counterfeit diamond ring, Jane fell ill. He decided to stay behind at the office and direct his colleagues from his couch. Huddled under his blanket, Jane sent Lisbon out to do his bidding, so to speak. Lisbon posed as a psychic in order to flush out the killer. Mission accomplished.

It wasnâ€™t all sunshine and roses for viewers. Dennis Abbott found himself in a world of trouble. His past in Rio Bravo snuck up on him and the timing couldnâ€™t have been worse.

His wife, Lena (Christine Adams, Marvel’s Agents of S.H.I.E.L.D.), announced that she was up for a huge promotion.

Desperate to make things right for his wife and allow her to get the promotion that she so desperately wants and has worked for, Abbott made a tough decision. He told Lena that the two of them should spend some time apart, at least for now.

Lena pleaded with him. She assured him that he could tell her anything, but Abbott insisted that she go to Washington D.C. without him. These two make a great couple. I was touched when Abbott stepped up to the plate for his wife. He really wants her to get that Cabinet position. Go Dennis!

Back at the trailer, Jane told Lisbon that she did a great job. She admitted that she had fun playing a faux psychic. Just as the two were settling down for the evening, I thought things were going to heat up between Jisbon.

Instead, things got weird in a quick hurry.

Lisbon: â€œWhat do you want to do?â€

Jane: â€œI donâ€™t know, are we really going to work for the FBI for the rest of our lives?â€

Lisbon didnâ€™t pull any punches, she told him, â€œItâ€™s who I am, Jane.â€ Jane acknowledged her and then the two said goodnight. Talk about an awkward moment. Yikes!

Meanwhile, Iâ€™m still digesting â€œOrange Blossom Ice Creamâ€ and the events that went down during that episode.

Erica Flynn (Morena Baccarin, Firefly, Homeland, V) made a play for Jane and thatâ€™s not all she did. The devious and beautiful murderer managed to convince the CIA and FBI that she was now ready to play ball with them.

It goes without saying, Erica wanted something in return. She offered to turn over her boyfriend in exchange for amnesty for her past crimes. I never believed it for a second. She wanted to lay her lips on Patrick Jane again. Look into his eyes â€“ can you blame her? Sorry â€“ fantasy moment!

Lisbon wasnâ€™t having any of it; therefore, she decided to join Jane in Beirut.

During their not so excellent adventure, Jane and Lisbon met up with Erica Flynn and thatâ€™s when things turned sour. Jane was nearly drowned.

Erica taunted Lisbon by telling her that she and Jane shared a past kiss.

Then he had to come clean with Lisbon. Jane admitted to his gal pal that he did indeed plant one on Erica, but assured Lisbon that it would never happen again. I believe him. Do you?

The history between these three came in handy. Jisbon put on a show for the sly seductress. Jane and Lisbon argued in front of Flynn. Lisbon stormed off; giving Erica and Patrick some much needed alone time.

During their time-out, Jane revealed his true intentions to Erica. Unfortunately for Erica, the thought of going back to prison was not what she wanted to hear. Upset that she couldnâ€™t seduce Jane with her womanly wiles, she told him that his relationship with Lisbon would never last. Not to worry, Patrick professed his love for Teresa and then informed Ms. Flynn that she was headed back to jail. Erica pulled out a Taser and stung Jane. Ouch! Firmly planted in the hallway with gun in hand, it was Lisbon to the rescue. She arrested the femme fatale. Jisbonâ€™s plan worked like a charm.

In a very romantic gesture, Jane escorted Lisbon up to the hotel roof and thatâ€™s when the fireworks began. Iâ€™m serious. Fireworks were going off in the sky. Jane served Lisbon the Orange Blossom ice cream, which he promised her in the beginning of the episode. Libson played coy.

Jane: â€œAs they say, you can take the girl out of Chicago, but you canâ€™t take the Chicago out of the girl.â€

Will we see the likes of Erica Flynn again?

What about the pillow talk between Patrick and Teresa?

I have to wonder if they will end up together by the end of the series.

I do not know. With filming on the series now complete and only nine episodes left, fans (including myself) weâ€™ll have to stay tuned to find out.

During a recent episode of the CBSâ€™s The Talk, the ladies probed Simon Baker for answers.