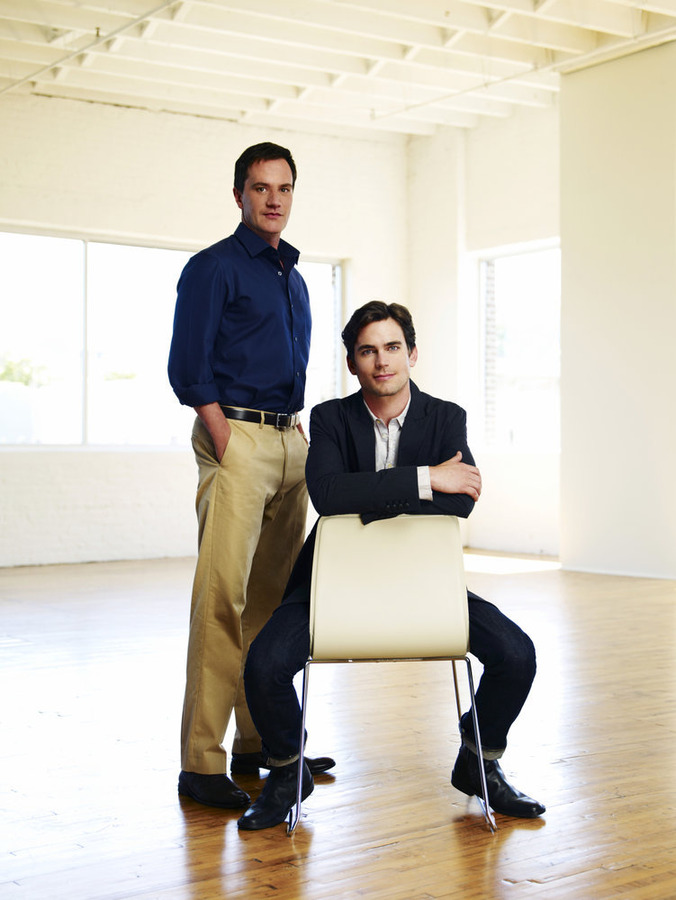 This is it. After six seasons, USA Network’s White Collar comes to an end.

In an episode aptly titled “Au Revoir” (that’s French for goodbye), the series finale plays out the season-long case where Neal infiltrates the infamous group, the Pink Panthers. It’s not just Neal that’s in danger anymore. Peter’s become more involved. According to an official synopsis, this move puts El (Tiffani Thiessen) “at unease with their new baby on the way.” As for Neal, he comes up with “a new plan that will serve the interest of the Pink Panthers…and himself.” Ruh Roh.

Tim DeKay and 2015 Golden Globe nominee, Matt Bomer, recently took part in a press call with reporters. They didn’t reveal much about the way the series ends, but Tim did issue a warning.

Tim DeKay: “Do not walk away until the final second of the episode. We’ve got some great twists and turns, some wonderful moments between everybody. And I think it fits on all the tones that have made White Collar what it is.”

One of the big questions is whether the actors were satisfied with the ending.

Matt Bomer:Â “I was really satisfied in some ways and in some ways I would have been interested to explore other avenues as well. I mean, I think there [were] still directions to go. But I think the way they wrapped it up was really well done in the sense that they didnâ€™t try to tie everything up into a nice bow. They really left some things open ended and left a lot up to the viewer’s imagination which I always think is more potent than anything you could put down on a piece of paper.”

One of the great things about White Collar is you can always tell that the actors are as passionate about the show as its fans. So having to say goodbye has to be difficult. Both Bomer and DeKay admit the last day was emotional.

Matt: “It was really emotional. I’m so glad that I think most of us — if not all of us — were able to process a lot of that in the moment as opposed to just finding yourself driving down a street in L.A. five months later and, you know, bursting into tears. But it was great. Iâ€™m so grateful. It’s so easy to focus on how much we’ll miss everybody — and I will — but I just feel like we’re all so lucky that we got to do this for six seasons and got to enjoy each other’s company for that time and make a lot of relationships. Business relationships and friendships were created that will last a lifetime. So I think there’s a lot more to be grateful for than there is to be sad about.”

Tim: “Matt and me…we both got to speak and we were all — everybody was crying. And then they brought out a cake and it was lovely because the cast and crew became such a family. And it was just a joy to go to work.”

The relationship between Peter Burke and Neal Caffrey is complex. They are so different. One’s a federal agent, the other a con man. Peter is a solid force that has strongÂ roots in New York City. He has a job he loves and a woman he loves even more. And now the two have a baby on the way. Thanks to his criminal tendencies and that pesky ankle monitor, Neal is tied down to one place. But take away those legal issues that force him to stay in one place and you’d have to think Neal would vanish in a second. Over the years, Peter and Neal alternated between in synch partners and woefully operating on different wavelengths. It has been an interesting relationship to watch unfold.

Matt: “It really did start with the writing and I knew from the first time that Tim and I read together that we had somewhat of an understanding of the yin and yang of these two people and not only what made them different but what made them want to be the same in certain ways. And we were lucky enough to have Jeff who was willing to listen to us and we were able to listen to him and just bounce ideas off of each other and get to riff on those things. And then I think we just had a blast doing it together.”

Working together as long as they did, the two learned from each other.

Matt: “I learned from Tim the kind of person I should be on set. I learned how to be a morning person because I never was thanks to this job. And Tim just is. And I learned a tremendous amount about acting from him. Every day I learned something different from him as an actor. But also I think I learned just as much about how to handle yourself on set on a day-to-day basis.”

Tim: “I learned from Matt. I really did. I learned his work ethic is unmatched. I’ve yet to see anybody who works harder than Matt. He’s never satisfied which is something none of us are as artistsâ€¦[we’re] never quite satisfied. There’s always one more take we want. One more moment that I’d like to work on again. And I’m glad that neither one of us ever allowed or accepted it to be satisfactory, never allowed us to be satisfied. The two of us never were. And also I learned another kind of comedy from Matt. I group all these people that I know who have a certain kind of comedy and Matt is so specific and just brilliant and hilarious.”