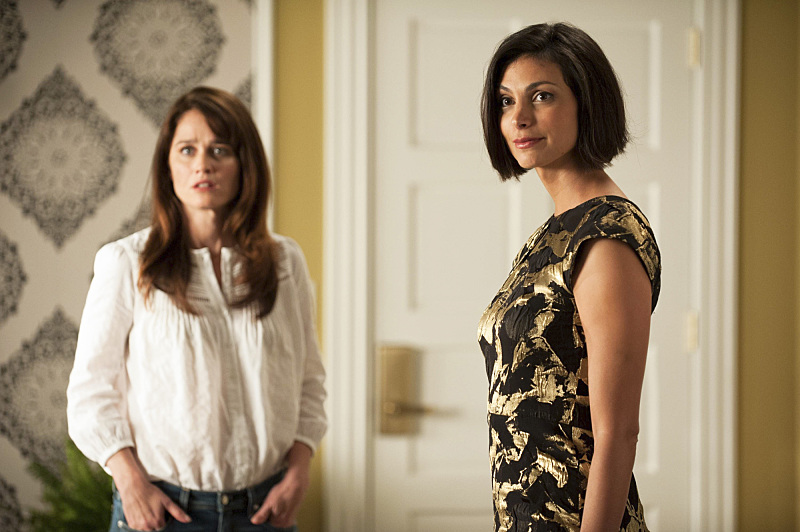 Beautiful and deadly as ever, Erica Flynn (Morena Baccarin, Firefly, Homeland, V) is back and once again has her eyes set on Patrick Jane.

CBS Synopsis for “Orange Blossom Ice Cream”: Jane and Lisbon travel to Beirut where they must work with Janeâ€™s familiar adversary Erica Flynn, who agrees to help the FBI apprehend her boyfriend, a courier for terrorist organizations, in exchange for amnesty for her past crimes.

We first met this sly, seductress in Season 3 Episode 19, â€œEvery Rose Has Its Thorn.â€ Back then she was sent to prison for killing her husband, but not before tapping into Janeâ€™s psyche. Flynn got Jane to open up and share his feelings about his deceased wife, who was brutally slain by Red John. The entire incident was caught on tape. Lisbon watched it all.

Keep in mind; Jisbon is a couple. Can we say awkward?

The last time we saw Flynn was during Season 4 Episode 15, â€œWar of Roses.â€ Once again, she managed to probe Jane, but in a very different way. This time Erica got Jane alone in a hotel room and seduced him. He was a willing participant. She managed to escape to a warm climate. Erica called Patrick said that she was looking forward to the time that the two would meet again. That time has arrived.

What trouble will Jane land in this time? Maybe, heâ€™ll manage to stay out of hot water, or not? At least, he has Lisbon with him and she has her own agenda: keeping her man alive and all to herself!

Itâ€™ll be interesting to see how these three manage to work together.

Donâ€™t forget, while this trio is off in Beirut, Wylie, Cho and Vega are hard at work too. Rookie Vega is still trying to carve out her own niche.

The final season of The Mentalist airs Sundays on CBS @ 9/8c.