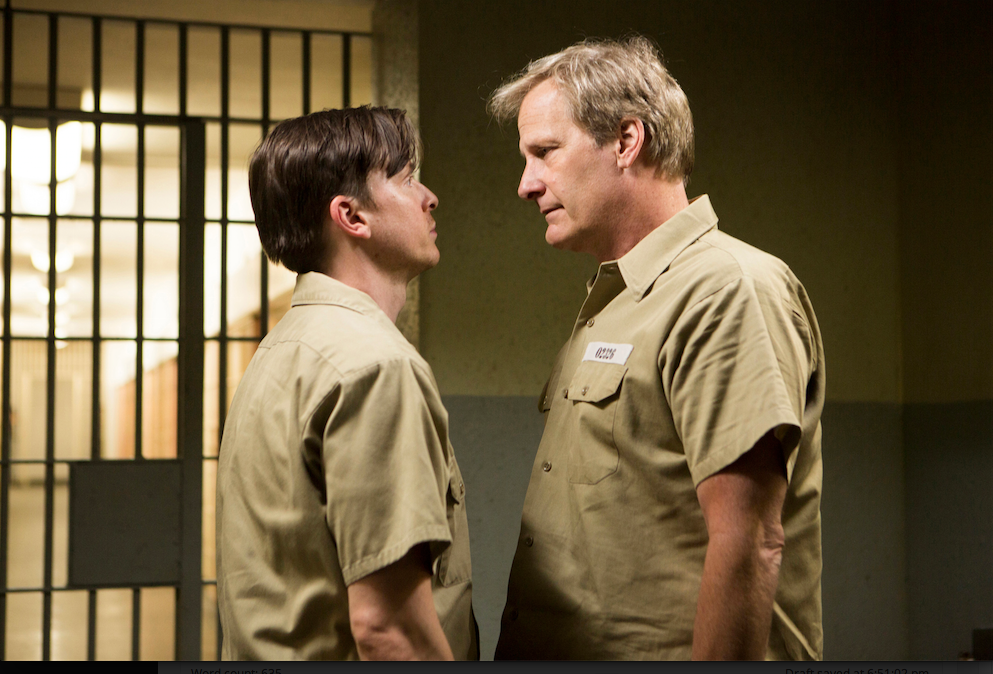 My heart is still breaking over the death of Charlie Skinner. If you read my preview, Charlie was my first pick to go, but when it actually happened, I was crushed. I actually cried. Kleenex in hand, I had to remind myself that Charlie is/was a fictional character.

â€œOh Shenandoahâ€ proved to be the best episode of the entire series to date. Iâ€™m not sure if Charlie having a heart attack in the ACN newsroom or Willâ€™s break with reality was more difficult to watch.

The episode begins with Will entering a prison cell. Shortly after, we find out that 52 days have passed since Will married Mac and went to jail for not revealing his source. Unbeknownst to Will, a lot of changes have taken place during his nearly two months behind bars, not only to other members of the ACN news staff, but to Will himself.

During the course of the episode, Will is constantly trying to outsmart his cellmate [Kevin Rankin] who we find out really isnâ€™t his cellmate at all.

You may remember that during season one, episode six, â€œBulliesâ€ that Will was having trouble sleeping. He sought out the counsel of Dr. Habib [David Krumholtz]. Will was struggling with a lot of issues back then. He couldnâ€™t sleep. As a result of a death threat, he had a bodyguard by his side. Of course, he was trying to come to terms with having Mac back in his life. By the end of that episode, we found out that Willâ€™s father was an abusive alcoholic. Flash-forward to â€œOh Shenandoahâ€, we see that isolation isnâ€™t the best situation for Will; his cellmate turns out to be his deceased father. The entire time, Will was suffering from delusions.

Keep in mind, that he could have been sprung sooner, but declined to reveal his source, even though Lilly had killed herself.

Some of the stories leading up to Charlieâ€™s death included Don being forced to purse a campus gang rape story. Although he could have aired it, he chose to lie to Charlie, saying that he didnâ€™t get it.

Mac, Sloan and Don were on a mission to shut down the website or at least a portion of it. They were not in favor of ACN digital and ACNGAGE. To them, it was a form of citizen journalism. They didnâ€™t believe in the stalker mentality that Bree [Jon Bass] Nealâ€™s replacement, was trying to promote. He was one of Pruittâ€™s hires. Right before Charlie exploded in anger and died, Sloan grilled Bree on live TV. She didnâ€™t let up.

Charlie wanted so badly to prove to Pruitt that he could roll with the punches. He wasnâ€™t just some old guy; Charlie wanted Pruitt to know that he was a part of the 21st century. In the end, his efforts were all in vain. Although as a former news producer, I can appreciate the rest of the team fighting the good fight in order to keep what they had built, it wasnâ€™t worth. It cost Charlie his life.

On a much happier note, Maggie and Jim finally admitted their feelings while on an airplane. For a minute, I thought they were going to become members of the mile high club! LOL! They didnâ€™t and it turned out to be one of the only tender moments of the episode.

One episode remains. Based on the preview clip, Charlie is buried. It looks like Will is struggling with some mental health issues again.

The series finale of The Newsroom airs Sunday on HBO at 9/8c.

Once Upon a Time "Shattered Sight"