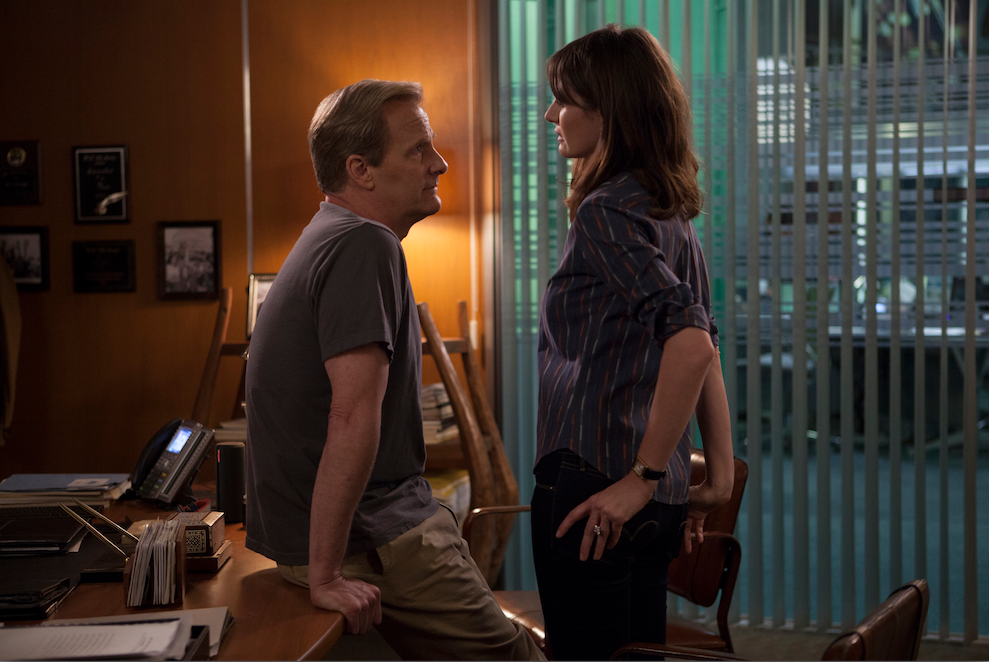 Warning: MAJORÂ Spoilers and Speculation Ahead

Itâ€™s hard to believe there is only ONE episode left until the series finale. It seems like thereâ€™s a lot of story left to tell. When it is all said and done, will viewers and fans of the show be satisfied with the final outcome? Iâ€™m not sure; however, I AM SURE, that Iâ€™ll be glued to my TV until the final credits roll.

Recapping last weekâ€™s episode -â€œContemptâ€ – Mackenzie met with Lilly (the ALLEGED source) and begged her not to dump the documents before she could run the story. Reese pulled the plug on it when Lucas Pruit inked the deal. Mackenzie sent the classified documents to another media outlet. Hallie and Jim called it quits. Maggie and her boyfriend had a disagreement over her feelings for Jim. Don and Sloan caught a break from the HR guy. Will refused to give up his source. The judge found him in contempt of court.

Will and Mackenzie moved up their wedding. The two got married at city hall. Will was handcuffed and taken away.

Incarcerated for contempt, Will refuses to reveal the name of Nealâ€™s government source. Appearing to embrace Pruitâ€™s mandate to capture younger viewers, Charlie orders a reluctant Don to track down principals in a sexual-abuse case at an elite college. Sloan voices her objection to a new digital site built by Nealâ€™s replacement, Bree (Jon Bass). Stranded in a Moscow airport, Jim and Maggie look to land seats for a Cuban-bound plane, hoping to interview one of its high-profile passengers.

Based on the clip, Charlie seems to be at his wits end. Is all of the change too much for him? Is Charlie considering retirement? Maybe thatâ€™s what Don is asking him about. It looks like Mac might be in trouble for handing over the documents. Could Maggie and Jim be chasing after Edward Snowden? Hereâ€™s something else to think about â€“ will Jim and Maggie finally hookup? I hope so. What about Will? Heâ€™s still in jail, but for how long?

Looking ahead to the series finale, â€œ What Kind of Day Has It Beenâ€ â€“ According to the HBO synopsis, A sudden death leads Will and MacÂ to ponder the milestones that transformed the newsroom, and look ahead towards ACNâ€™s uncertain future. Maggie lands a field-producer interview in Washington; Nealâ€™s digital site is shut down for repairs; Leona offers sage advice to Pruit.

We know that someone is going to die. I have a few theories.

A. Charlie Skinner â€“ Will and Mac would be devastated if they lost their long time, mentor, co-worker and friend. Charlie has been extremely stressed this season and heâ€™s having a hard time dealing with all of the changes at ACN.

Plus, I conducted my own research. I went to IMDB for some clues.

B. Neal Sampat â€“ We havenâ€™t seen Neal. In the HBO synopsis, his computer is being shut down for repairs. Will and Mac would have a lot to ponder if something happened to Neal. Donâ€™t forget, Will gave him his personal credit card to purchase that special computer â€“ you know â€“ the one Neal needed to download the classified documents, which lead to all of this trouble.

C. Jim Harper â€“ I hope it is not Jim, but if it is, I will need a box of Kleenex â€“ maybe two. Iâ€™m hoping for a Maggie and Jim reunion, but they are going on a rather dangerous adventure tonight. We know from the final synopsis that Maggie lands a job interview, but Jimâ€™s name isnâ€™t mentioned in it. Please donâ€™t let it be Jim.

D. Will McAvoy â€“ Go with me on this – if you dare! Itâ€™s crazy or is it? His name is in the synopsis, but what if heâ€™s talking to Mac from the great beyond? I havenâ€™t lost my mind! There have been many unsettling endings to TV series over the years. Think about how The Sopranos ended â€“ the screen went to black. With that being said, I sincerely hope that Aaron Sorkin gives us a satisfying ending. Itâ€™s been a phenomenal ride.

Who do you think will die in the last episode? Iâ€™d like to hear from you. Please leave a comment.

The final season of The Newsroom airs at 9/8c on HBO.