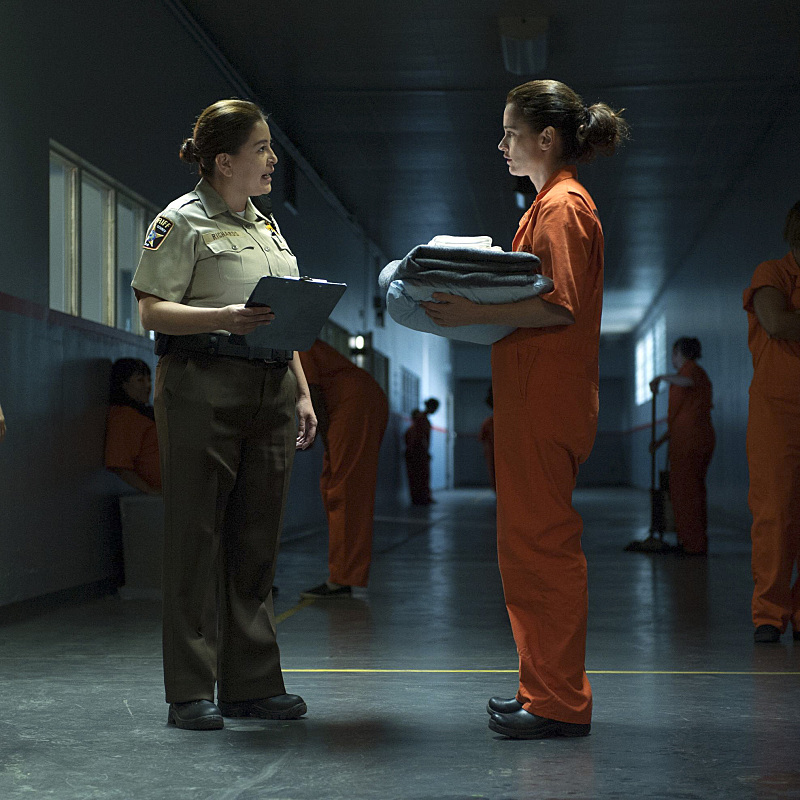 Fast and somewhat furious, the episode begins with a short-lived car chase. The feds show up and bust Marie (Brit Morgan,Â True Blood, Graceland) for grand theft auto. Questioned by Cho and Abbott, Marie decides not to dish on her boyfriend, Cole (Val Lauren) or his friend and ringleader, Hendricks (Tom Kiesche).

At the request of the CIAâ€™s Danitra Cass (NYPD Blue and Franklin & Bash alum Garcelle Beauvais), Lisbon agrees to go undercover as a prison inmate. Abbott expresses his concern about sending his prize agent to jail. Cass tells him that Hendricks might have ties to terrorism.

Itâ€™s off to â€œThe Greybar Hotelâ€ for Lisbon, but not before Jane gives his girlfriend some tips on how to handle herself. Lisbon assures him that sheâ€™ll be fine. Jane handcuffs her, but itâ€™s no Fifty Shades of Grey for this new couple.

When Lisbon arrives at the prison, she looks so innocent, but donâ€™t be fooled. She steps in to protect Marie and soon after, the two become friends.

Lisbon gains Marie’s trust by discussing her relationship with Jane. The young and somewhat naive Marie opens up to Lisbon and tells her everything about Cole.

Worried about Lisbon, Abbott decides to call off the operation, but Jane has another idea in mind. Jane and the rest of the team come up with a plan to spring the jailbirds. Abbott puts the plan in motion, by visiting Marie and telling her that if she doesnâ€™t sing like a bird, heâ€™ll send her to a Supermax prison.

Marie reports back to Lisbon. The plan works like a charm. Lisbon comes up with her own story. Lisbon tells Marie that sheâ€™s a three-time loser and that the DA is planning on going after her. Then she brings up the topic of breaking out of jail. Marie bites! She ensures Lisbon that her man will take them anywhere they want to go.

The two manage to break free, dressed as workers. Once they areÂ out, the two meet up with Hendricks. Vega and Jane join the search when Abbott and Cho lose sight of Lisbon. She ends up at a convenience store with Marie, who meets up with her guy â€“ Cole.

Things turn ugly in a hot hurry, when Cole shoots and kills the store clerk. Lisbon leaves her footprints in blood for Jane to find.

A few minutes later, Jane and Vega arrive at the crime scene. While Vega secures it, Jane finds a note left by Lisbon. He also notices her bloody footprints. Vega, being the rookie she is, wants to go by the book, but Jane has other plans. He takes off in hot pursuit of Lisbon.

Marie, Cole and Lisbon meet up with Hendricks at an undisclosed sight. They notice Lisbonâ€™s gun and become suspicious. Jane takes a big risk for his lady. He reveals himself as a member of the FBI.

His gamble pays off. Vega and the team show up and bust them.

Once in custody, Cho scores a deal with Cole. He promises to drop all charges against Marie. This is where it gets really interesting. It turns out that Jane knows the girlfriend of the smuggler. It is a familiar adversary of Jane. These two have a history. Firefly and Homeland‘s Morena Baccarin returns next week as Erica Flynn.

Jane and Lisbon travel to Beirut where they must work with Janeâ€™s familiar adversary Erica Flynn, who agrees to help the FBI apprehend her boyfriend, a courier for terrorist organizations, in exchange for amnesty for her past crimes.

The final season of The Mentalist airs Sundays at 9/8c on CBS.

Just a reminder, due to the current NFL football schedule, youâ€™ll want to check your local listings for any time changes.

Another [SPOILER] Goes Down, Revenge "Atonement"

Lucifer is All About the “Lady Parts” This Week

The Heart of the Matter: Bohannon and Ruth in Hell on Wheels “Thirteen Steps”

The Walking Dead “Arrow On The Doorpost”

NYC, Superheroes and the New Man in the Suit, Person of Interest “Pretenders”