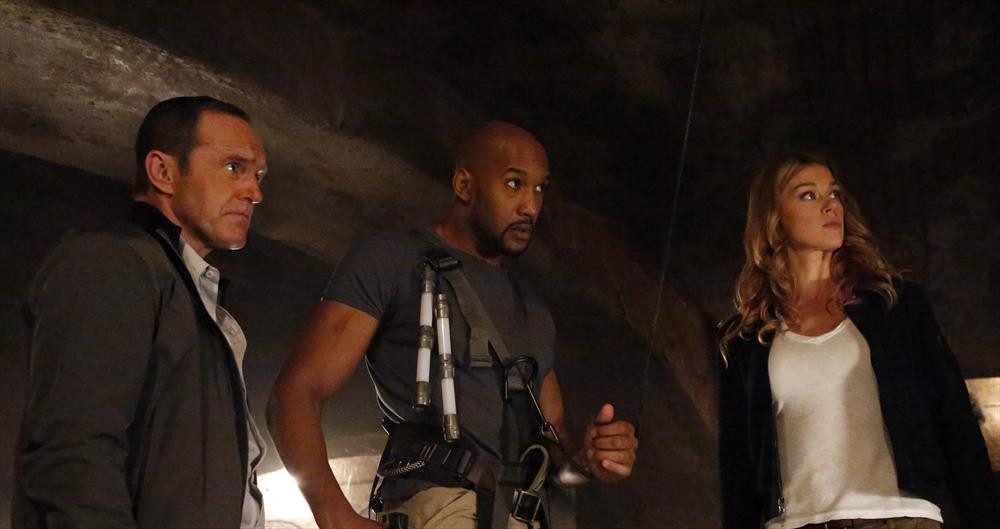 If there’s one thing Marvel’s Agents of S.H.I.E.L.D. needs to do more often, it’s to get Coulson (Clark Gregg) out of that stuffy old office of his and out into the field. First we had him in a suit and dancing with Melinda May (Ming-Na Wen) a few episodes back. As much as I don’t ship anybody, I come as close as I ever have with May and Coulson, primarily because A) they’re both awesome and B) May is not sentimental in any way, shape or form. There’s no chance their relationship would devolve into one that involved displaying any sort of emotion at all. Just the way I like it.Â

And then this week, he and Bobbi Morse (Adrianne Palicki) are playing tourist while trying to find a way into the hidden city; he’s wearing jeans and trying on hats (don’t feel bad, Phil, my head is too big for most hats, too). First, it’s just fun and it’s always nice to see another side to the boss, but it also loosens him up a bit and gives his character more layers and dimension.

This week’s episode title, “Ye Who Enter Here,” is presumably a reference to the quote from Dante’s The Divine Comedy, “Abandon hope, all ye who enter here,” which, in the poem is an inscription over the entrance to Hell (make of that what you will). The Hidden City is making it pretty difficult for anyone to enter it; there’s legends of the entrance being haunted, which keeps people away. The chamber through the floor is too dark to see into and the drones the team of Morse, Coulson, Mack, Fitz and Simmons send down malfunction. If this isn’t enough to make you lose hope, I don’t know what is.

When Mack gets lowered to the cavern base, he touches the floor and it’s as if something takes him over. The floor exhibits the signs we’ve come to know all to well, and when he reaches the surface again, he attacks the team and it’s clear he won’t stop until he kills them. Whether this reaction is a defense mechanism of the city to protect itself and keep people out or he’s been exposed to the marks on the obelisk and this is some sort of reaction, I don’t know, but he’s not listening to listen, can’t be stopped by the night-night gun, and is a whirling dervish of hate until he gets knocked back down the hole. I suspect he’s not actually dead. They like to show bodies when people are dead, and even then, you can’t quite trust them. They’re Whedons. They live to mess with me.

The team also loses Skye when Ward (Brett Dalton) and a HYDRA crew surrounds the quinjet and threatens to blow everyone if Raina (Ruth Negga) and Skye don’t leave with him to be taken back to Whitehall (Reed Diamond), and, presumably, Papa Skye’s loving embrace (that was creepier than I meant it to be).

While May is not-quite-kidding when she says being blown-up might be worth it, since it means Ward and his team will be taken out, too, Hunter (Nick Blood) unsurprisingly, isn’t really loving that idea (look at the big picture, you selfish git. Ward set his whole family on fire, just because he felt like it. Play the tape to the end, what do you think he’s going to do when he’s really invested in something?

The Koenig brothers, Sam and Billy â€“ and shut it, boys; you’re both short â€“ (Patton Oswalt) will probably do anything to see Ward sent to whatever Hell they can ship him off to; they’re still really pissed about him killing other brother, Eric, so you go ahead and blow everyone up, there, Grant. It’s not like there aren’t, like, 37 more Koenig brothers ready to crawl out of the woodwork, anyway.

Sadly, nobody gets blown up, and Skye is off to meet her dad, who she hasn’t seen since she was born, apparently. According to Raina, he built himself a nice little surrogate family of street kids in Thailand, and taught them to be better than they thought they were. I dunno, Raina seems like she was always pretty sure of herself.

Her grandmother used to tell her stories about the “blue angels” who came to earth called the Kree (and the other shoe drops in millions of geek homes across North America) and now Skye is going to be reunited with her dad, and he’ll show her she’s one of the “worthy” that her grandmother had told stories about. Now, I wonder if Raina’s ever going to get to the part of the story where the Kree were colossally big jerks?

Next Week: A father and child reunion that makes my family holiday get-togethers look like Christmas mass in comparison.

The Vampire Diaries “Detoured on Some Random Backwoods Path to Hell”