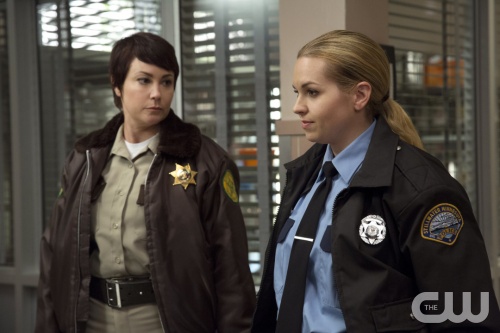 Two of our favorite female characters in the Supernatural universe return tonight on the CW. Sheriff Jody Mills is back. We’re used to her popping up every season.Â Sheriff Donna Hanscum makes her first return trip to the series. And we couldn’t be happier. She was the best thing about the season nine episode, “The Purge.”

Here’s a trailer for the episode:

Synopsis for “Hibbing 911”:Â Jody Mills reluctantly attends a mandatory sheriff’s retreat and is partnered with an overeager sheriff named Donna (guest star Briana Buckmaster) who wants to bond. Just as Jody thinks things can’t get any worse, a body with just strings of meat and skin hanging off the bones is discovered. While the local sheriffs blame an animal attack, Jody knows better and calls Sam and Dean. Tim Andrew directed this episode with teleplay by Jenny Klein and story by Jenny Klein & Phil Sgriccia (#1008). Original airdate 12/2/2014.

“Thereâ€™s more estrogen than mine in this episode. Sheriff Jody and Sheriff Donna get to work together. Itâ€™s not true love at first sight…letâ€™s just say. Itâ€™s definitely a relationship that had it not been for circumstances, would not have evolved. But by the end of the episode, is a pretty fast friendship.”

Now we know things will most probably be Monster of the Week-related. Will we see anything mythology-based in “Hibbing 911?” Will we get a sense of what will happen with Sam in the second half of the season? Will the Mark of Cain affect Dean in any way? Take a look at this sneak peek:

Find out when Supernatural airs tonight at 9/8c on the CW.