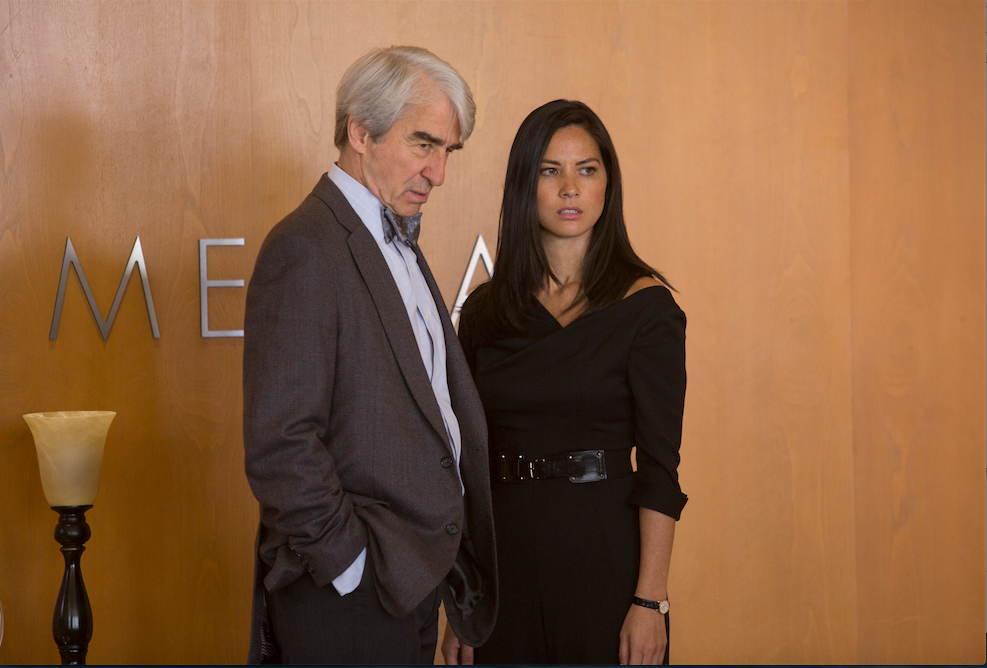 Will may have thought he was too big to go to jail, but it turns out he was mistaken. Instead of dinner, heâ€™s served a subpoena at the White House Correspondentsâ€™ dinner. It doesnâ€™t take long for the news to spread. Carnivore, the website that Hallie works for, is the first one to publish the story.

Will makes an attempt to shake it off, because heâ€™s got more important business to deal with, the impending sale of the network to Lucas Pruit. B.J. Novak is bringing his â€˜Aâ€™ game to the role. Pruit admits to Will, Charlie and Mac, that he asked Will to the party in order to prove a point to them. Heâ€™s in charge and wonâ€™t be pushed around. Pruit tells them that he wants to gain a younger audience by pushing social media.

A few days later, Charlie decides to team up with Sloan in hopes of finding a new buyer. Sloan comes up with a name – think Melanie Griffith in Working Girl â€“ minus the Big Hair – it was one of my favorite scenes. Hereâ€™s a look.

Meanwhile, the government prosecutor, ACN attorney, Rebecca Halliday and Will appear in the judge’s chambers.

The judge remembers Will from the days when he was practicing law. Based on what he knows about Will, he predicts that he will not reveal his source. Later, the judge proves to be correct in his assumption.

Mac is frustrated because she cannot run the story for a variety of reasons; therefore, she meets with the source one more time. Much to her dismay, the source refuses to push back the deadline. MacKenzie lets the source know in no uncertain terms that if she dumps the documents, sheâ€™ll quit her job and give her name to the FBI. In the end, Mac isnâ€™t able to run the story and secretly hands it over to an Associated Press reporter.

Sloan and Charlie meet with a possible new buyer; however, it turns out they are duped, by Pruit, who is now the new owner.

On the relationship front; things between Hallie and Jim turn ugly. He doesnâ€™t like Carnivore. He promises Hallie that he wonâ€™t agitate her, but continues to do so. Hallie writes and publishes a childish piece about the two of them. In the end, they call it quits over the entire ordeal. So now that Jim and Hallie are no longer together, does this open the door for a Jim and Maggie reunion? Itâ€™s possible, since Maggie and her boyfriend â€“ the ethics professor â€“ had their own argument. It doesnâ€™t take him long to figure out that Maggie still has feelings for Jim.

On a lighter note, Sloan and Don are off the hook. The new HR guy, Wyatt (Keith Powell) comes clean with them. It turns out, that heâ€™s been playing them all along. Take a look.

The episode ends on a bittersweet note. The judge finds Will in contempt of court and orders him to surrender himself by the end of the day. When he breaks the news to Mac, she decides to move up the wedding. The two are married by a Catholic priest at a chapel in City Hall, surrounded by their closest friends.

In a very soap opera-like montage, the final few minutes are played out scene-by-scene to “Ava Maria,” sung by Katie Boeck. Her version of the classic, is very moving. Then again, Iâ€™ve never heard a bad rendition of “Ava Maria.” Getting back to the ending, after Will and Mac say their vows, they leave the chapel and kiss goodbye. Will is taken away in handcuffs, as his bride and Charlie look on.

If you want to see how it all came together, hereâ€™s your chance to go Inside the Episode with The Newsroom Creator, EP and Writer, Aaron Sorkin.

Do you have a question for Mr. Sorkin? If so, ask him on HBO Connect. You can submit your questions and then join the live Q&A with Aaron Sorkin, Tuesday, Dec. 2 at 7PM EST.

Youâ€™ll want to tune in on Sunday for the second to the last episode of The Newsroom. Hereâ€™s a sneak peek at â€œOh Shenandoahâ€:

The final season of The Newsroom airsÂ Sundays at 9/8c on HBO.

Once Upon a Time "Fall"

Nothing but Jane, Lisbon, Love and Murder, The Mentalist â€œNothing but Blue Skiesâ€

Once Upon a Time “The Bear and the Bow”