The Mentalist Preview: “Nothing but Blue Skies” [INTERVIEW, PHOTOS, VIDEO] 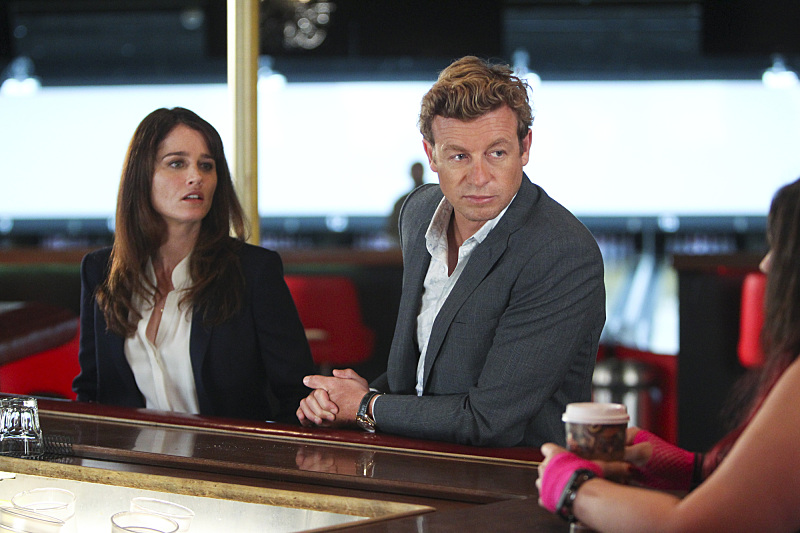 RELATED STORY: A recap of The Mentalist season premiere

â€œNothing But Blue Skiesâ€ and Simon Bakerâ€™s blue eyes! Patrick Jane is back along with his partner, Teresa Lisbon (Robin Tunney), following that steamy kiss in the season six finale of The Mentalist.

Iâ€™ve seen tonightâ€™s episode and I can tell you that â€œJisbonâ€ fans will not be disappointed. Itâ€™s official â€“ they are a couple! After some time off, itâ€™s back to work for this romantic duo.

TV Goodness participated in a press call that featuredÂ Simon Baker and Robin Tunney. I asked Simon and Robin to share a few of their fondest moments with me over the past seven seasons and one of them involved a not-so private kiss.

Robin Tunney Â [to Simon Baker]: Your wife was at the monitor. She called me ahead of time and asked if she minded if she watched. And weâ€™re all friends and I said, sure why not? And she watched and she was moved. Iâ€™m not lying.

Simon: No (laughter) I was was nervous.

Robin: He was SO nervous.

As I found out, thereâ€™s more that keeps these two going while spending long days on-set.

Robin: I think a lot of our joy at work has been surrounded by food. When you work this long there are certain days and Simon looks over and says, how about sushi? I just feel excited. We eat food together.

When I asked them the real secret of their success, hereâ€™s what they had to say:

Simon: Robin has a tramp stamp of a shark on the small of her back. No, Iâ€™m lying. Thatâ€™s one of those questions that is hard to answer because by now if it were still a secret, it would be a secret for good reasons.

Robin: And then it would be a betrayal.

On the show, itâ€™s not going to be so easy to keep their romance on the down low, especially for Jane. Heâ€™s acting like a teenage boy. Itâ€™s adorable. Itâ€™s nice to see the lighter side of his soul, especially after so many years of watching Janeâ€™s darker side, during the â€œRed Johnâ€ storyline. By the way, rumor has it that Mentalist creator Bruno Heller will not be revisiting that storyline â€“ EVER. In fact, look for Jane to remain focused on his relationship with Lisbon and his career.

Fans can also look forward to the return of Cho (Tim Kang) and FBI Special Agent, Dennis Abbott (Rockmond Dunbar) and a new kid in town.

Josie Loren joins the cast as rookie FBI agent, Michelle Vega. Sheâ€™s having a difficult time figuring out Jane â€“ thatâ€™s to be expected â€“ after all â€“ itâ€™s Patrick Jane. Weâ€™re still trying to figure him out, but itâ€™s still a lot of fun!

For more on what we can expect this season, hereâ€™s a look behind-the-scenes, courtesy of CBS.