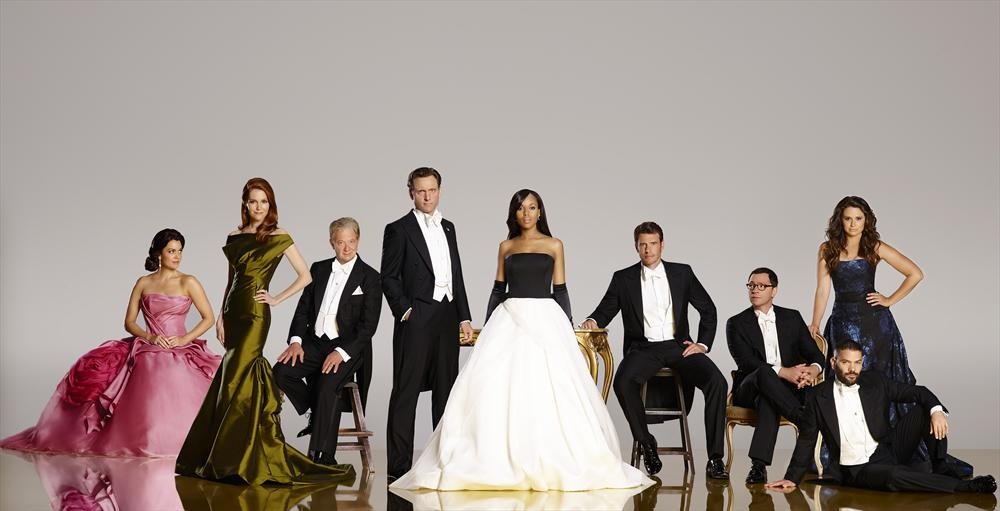 There are so many reasons I am thankful for Scandal, especially in season four. It’s been a game-changing season for sure. It’s had to deal with a lot like Harrisonâ€™s death, the separation of Pope & Associates and the aftermath of losing a child. We can’t forget about Olivia and her struggle between the sun…and Vermont. The show manages to do a great job of exploiting the weaknesses of strong characters…without destroying or ruining them. In fact, it makes us care even more about them. Scandal does the impossible. It manages toÂ keep its identityÂ and keep it fresh as it advances its stories to new, unexpected places. I actually feel sorry for people who arenâ€™t watching it. So letâ€™s break it down:

#10 The twisted love triangle that is Fitz/Olivia/Jake

It must be such hard work for Kerry Washington to have to work with two guys that are not only great actors but are that good looking.

What I love about this is not only is the writing good but the acting just elevates it to a whole new level. You can feel all the painful nuance that happens in any scene that involvesÂ these three and any combination.

GetÂ Olivia/Fitz, Olivia/Jake, Jake/Fitz, or all three in a room at the same time — and you feel everything. It’s emotionally exhausting and emotionally satisfying.

Abby is always a bad ass but now she’s working in the White House. The season started with her being so angry with Olivia for leaving but when the chips were down they came together. Also, we finally got to meet her abusive ex-husband and saw how it really affected her. It broke myÂ heart when weÂ heardÂ for the first time exactly what he did to her. Iâ€™m still sad sheÂ and David arenâ€™t together but how cool is it that because of what this character went through we saw the good side of Leo Bergen (Paul Adelstein)?

#8 The aftermath of Teddyâ€™s death on Mellie

Could you imagine the First Lady wearing a robe and eating and drinking everything in sight? Mellie was always the strong one no matter what happenedÂ and watching her completely not care about appearances was sad, entertaining and brilliant. Losing a child must be the most horrific thing a parent could go through. So seeing what happens when the most stoic person goes through this is pure genius.

#7 The brilliance of Joe Morton

Every cast member is super talented on this show but there is something about Joe Morton that is so mesmerizing. Itâ€™s like we’re watching himÂ performÂ ShakespeareÂ wheneverÂ Rowan is a part of the action.Â Perfect example is when he realized Olivia â€œshotâ€ him in the mid-season finale. That scene alone should earn him another Emmy Award next year.

I always knew Portia was a good actress but somehow this character has elevated her in my mind. Yes, she often playsÂ bitchy in otherÂ roles,Â but there is something about the way she plays Elizabeth North. ElizabethÂ is layered and I feel like there are so many more things we are going to learn about her.

Ever since James died Cyrus has been broken. So it’s understandable why he became involved with Michael. Cyrus let his guard down when he began an affair with the guyÂ who spied for Elizabeth North. He was lonely. He missed his husband. We watched as this man who always knew what is what, get burned the same way he had burned others. Was it karmic retribution? Jeff Perry, actually makes you feel sorry for Cyrus. How does that happen with everythingÂ his character has done? Great acting and writing.

#4 Quinn is the glue that keeps the Gladiators connected

Quinn tracked down Olivia.Â She’s the one that tried to keepÂ in touch with everyone. This is the girl that was so messed up because of what Pope and Associates didÂ to her (Well, letâ€™s be honest, sheâ€™s still messed up. Way messed up). And now she has realized that no matter what, this is her family.

I donâ€™t know what to think of Charlie and Quinn. It is totally messed up yet entertaining all at the same time. These trained killers somehow found each other, in an insane world. Emphasis on insane. But we can’t forget about Quinn and Huck. Do they belong together? I donâ€™t know but itâ€™s fun to watch.

Not one actor on this show is a weak link. It is a true ensemble cast and what is interesting is all of them deserve awards, accolades, praise, etc. Not only does the level of acting on this show surpass most others, but the chemistry with this diverse group of people is unparalleled to other dramas, comedies, etc.

Shonda Rhimes continually proves whyÂ she is one of the best showrunners/writers out there today. With Scandal, every thing on every level is top notch. Every episode keeps you on your toes. As a viewer, you are never disappointed. And it all begins and ends with the words. They somehow manage to come up with exciting dialogue that’s highly hashtaggable (new word). They also somehow manage to send the story to dramatic, awkward and unpredictable places. And we love them for it. Kudos to Rhimes and her writing crew.

Now we have to wait to the end of January to find out one thing: Where is Olivia Pope? For people who havenâ€™t been watching this show, they donâ€™t know what they are missing.

Dancing with the Stars "Season 19 aka The Finals"