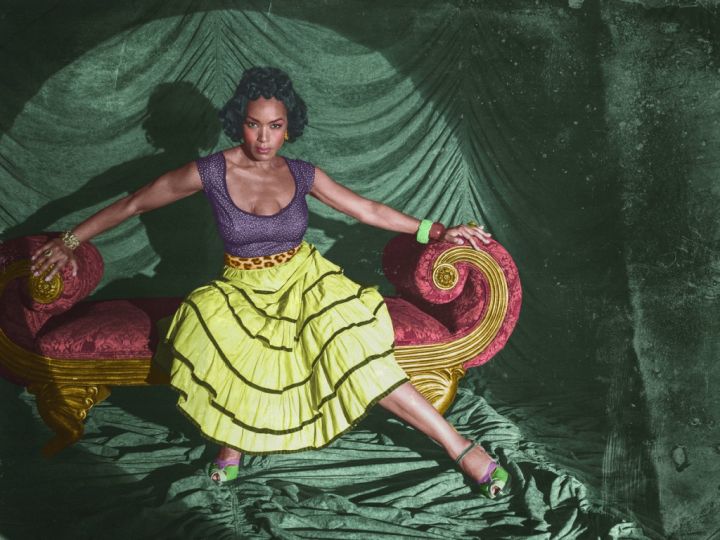 American Horror Story: Freak ShowÂ may be taking the week off for Thanksgiving, but we still have plenty to be thankful for. TV Goodness took part in a press call with Angela Bassett, who plays the sultry Desiree Dupree. She talks about working with an incredible ensemble cast, putting on prosthetics and what’s scared her this season.

On the extensive makeup process

Angela Bassett: Well, I go in. I go into my regular makeup artist. She applies the appliance to me, so that itâ€™s there basically. Then I go over to the special effects trailer where her husband makes sure the edges and everything sort of blend seamlessly. I guess I can say that. From there, he and the other special effects gentlemen will begin to apply the paint. Theyâ€™ll start with brown. They spray it on. Theyâ€™ll start with the brown. Theyâ€™ll go to the red, and yellow and green. Itâ€™s amazing these colors and undertones that they claim you possess. Youâ€™re like, oh, those are weird, weird colors. Then heâ€™ll take a photograph of it to make sure that it appears as if itâ€™s my own and based on that heâ€™ll maybe go in, and do so more painting and carry on.

Angela: That was one of the prevailing reasons for me joining the cast. I couldnâ€™t believe Iâ€™d get an opportunity to work with Jessica Lange and Kathy Bates in a lifetime, especially at the same time. Itâ€™s wonderful. Last year most of my scenes were with Kathy and Jessica. This year, mostly Chiklis and now Emma Roberts and the like. Weâ€™ll see. Everyone is just an ultimate professional. We have a good time with it. We all have an appreciation for this crazy world and the things that weâ€™re asked to do. It stretches us and grows us. The fact that we get to come back year after year and they fashion some completely new insanity for us to play out is a plus. Itâ€™s thrilling.

On a possibleÂ friendship between Desiree and Ethel in the future

Angela: We really donâ€™t know whatâ€™s coming in the subsequent episodes and the subsequent scripts. Thatâ€™s the aspect of this that makes it a little bit frustrating or difficult for us. I guess we donâ€™t have input, but we might have influence. Weâ€™ve played it as good, good friends. It remains to be seen. Maybe theyâ€™ll see that in the writerâ€™s room and itâ€™ll take them down a different road then they had anticipated. That can and does happen, and has happened in the past. Weâ€™ll see. Iâ€™d like to be friends with Ethel. We were such archenemies last year for all eternity as it turned out.

On her relationship with Dell going forward

Angela: Well, sheâ€™s walked out on him. She does demand a different kind of treatment. I guess honesty. Honesty for one, but thatâ€™s just not a desire of her as a freak, itâ€™s just desire for her as a human being.

OnÂ what’s scared her this season

Angela: I think when [Twisty] took that mask off and I saw where he had put a gun in his mouth and shot half his face off, you know? The way the little people treated him, which spurred him on to do that. I didnâ€™t like that. That sort of freaked me out, just how people treat one another. He was innocent in his mind, so taking advantage of that. Pushing him to that point. That was a lot for me. That made me very sad. I guess not freak out, but really, really sad.

On who makes her laughÂ behind the scenes

Angela: Letâ€™s see, well, Sarah Paulson can make me laugh really easy, so can Gabby [Sidibe] when sheâ€™s around. I havenâ€™t gotten the opportunity to spend any time with her this year. But, Sarah is pretty funny to me. Michael is light-hearted. Emma is pretty crazy. Sheâ€™s pretty funny.

Person of Interest Preview: "The Devil You Know" [EXCLUSIVE Clip and PHOTOS]