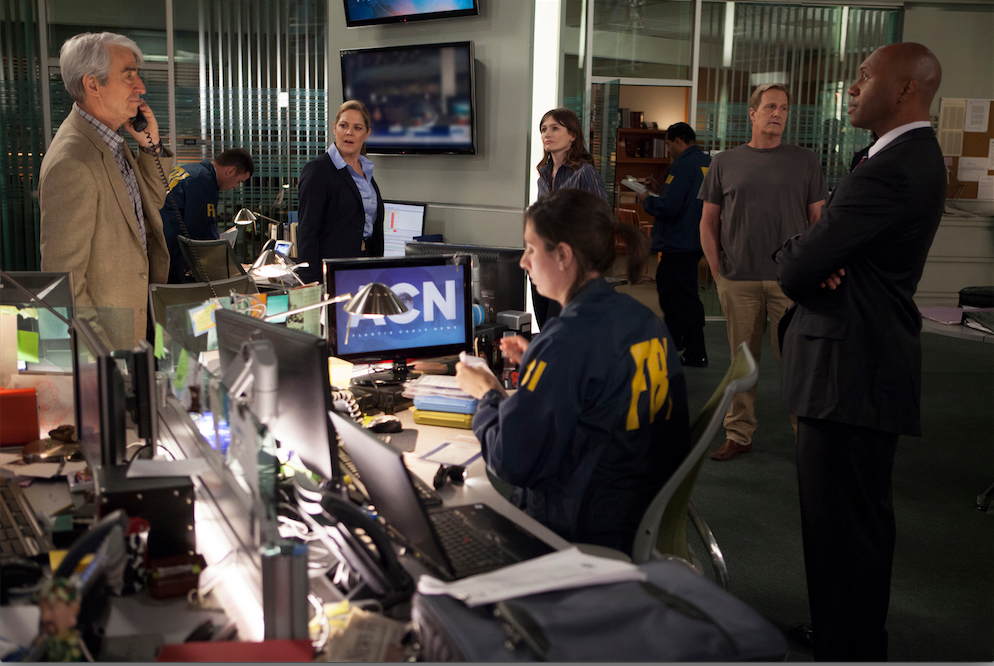 “Anything Goes”Â at ACN – the tune Gary Cooper was singing on his way into what would become one of the most explosive episodes to date. I havenâ€™t heard the F Bomb dropped so many times since I worked as a producer in broadcast news. It was quite a trip down memory lane!

Back to the show…the FBI storms the newsroom; however, members of the government agency find themselves surrounded by some serious journalists. MacKenzieâ€™s friend, Molly is in a comprising jam. The crew takes charge and threatens to air the entire raid live.

In the midst of all of the madness, Mac and Molly trade barbs over Mac and Willâ€™s wedding invitation.

Molly: â€œIâ€™m coming to your weddingâ€
Mac: â€œWell I havenâ€™t gotten your RSVP yet, Molly, so how would you like your named Chyroned? â€

While the catfight between the gal pals ensues, Gary grabs a camera and starts rolling on the raid. Don and Jim attempt to get the control room up and running; however, they find themselves in need of Maggieâ€™s help. The former production assistant shows them a thing or two. Jim and Don have a hard time deciding whether or not they can handle, â€œNew Competent Maggie.â€ I spy a new bromance brewing between these two former rivals.

Faced with the possibility of Sloan going live, the FBI tells everyone to stand down. As cooler heads prevail, the two sides agree to a one-week ceasefire. Meanwhile, Rebecca informs the key players that they will be meeting Main Justice in DC later in the week. Sheâ€™s hoping to find an amicable solution to the problem.

Will admits to Mac that he knows the identity of the Nealâ€™s source. Heâ€™s confident that they wonâ€™t lock him up due to his BIG TIME – TV ANCHOR status, but Mac is concerned for her fiancÃ©. Iâ€™m still wondering if these two will actually tie the knot.

Sadly, Reese and Leona decide to sell the news division, breaking Charlieâ€™s heart. Charlie takes it in stride…or so it seems. He calls a meeting to inform the staff about the new owner, Lucas Pruit (B.J. Novak, The Office); however, before other members of ACN get a chance to meet their new boss, Charlie and Lucas run into each other at the bar during the White House Correspondentsâ€™ dinner. Lucas pulls no punches with Charlie. He has his own ideas in mind for turning the flailing news division around. Charlie and the rest of the staff donâ€™t like them.

Thereâ€™s a new HR executive in the house. His name is Wyatt Geary (Keith Powell, 30 Rock) and heâ€™s determined to play by the book, especially when it comes to interoffice relationships or in his case, lack of them. Heâ€™s determined to out Don and Sloan. I love this couple! Why canâ€™t everyone get along?

Maggie is on a roll. She approaches Jim about her EPA story and things heat up a bit. Jim mocks her idea, but she stands her ground. Later after a fight with Hallie regarding her new job, Jim and Maggie discuss her story again. Looking for some sympathy, Jim explains tries to explain to Maggie what went down between him and Hallie. Maggie isnâ€™t buying it. Sheâ€™s is a smart young woman these days. In fact, she calls Jim out on the carpet regarding his behavior towards Hallie, leaving him looking like a fool.

The episode is filled with many twists and turns, including the revelation of Nealâ€™s source. Lilly Hall (Clea DuVall) surprises Mac at the White House Correspondentsâ€™ dinner. She wants to know why the story hasnâ€™t aired yet. Mac explained to her that they have a certain amount of time to cooperate with the FBI. Lilly informs Mac that if the story doesnâ€™t air soon, then sheâ€™ll upload it herself.

Finally the night arrives, Will, MacKenzie, Charlie and Rebecca meet in secret at Main Justice. The meeting doesnâ€™t go well. In addition to learning Nealâ€™s whereabouts â€“ he is in Venezula. Will quietly loses it. By the end of the episode, heâ€™s handed a subpoena.

Set that aside for a moment, I think Willâ€™s worst moment of the night was forced to interview Maggieâ€™s EPA source, Richard Westbrook (Paul Lieberstein). According to Mister Doom and Gloom, the end is near, time is up and we have no hope. Itâ€™s time to hunker down! LOL!

This scene was over-the-top and yet I found it to be very humorous in light of all of the disasters going on inside the ACN newsroom.

That being said, I still have hope for the final three episodes.

In my opinion, the writing and the acting in Episode 3 â€“ â€œMain Justiceâ€ — simply phenomenal.

Go Inside the Episode with Show Creator/Executive Producer/Writer, Aaron Sorkin for his view on â€œMain Justiceâ€:

The Newsroom airs Sundays at 9/8c on HBO.