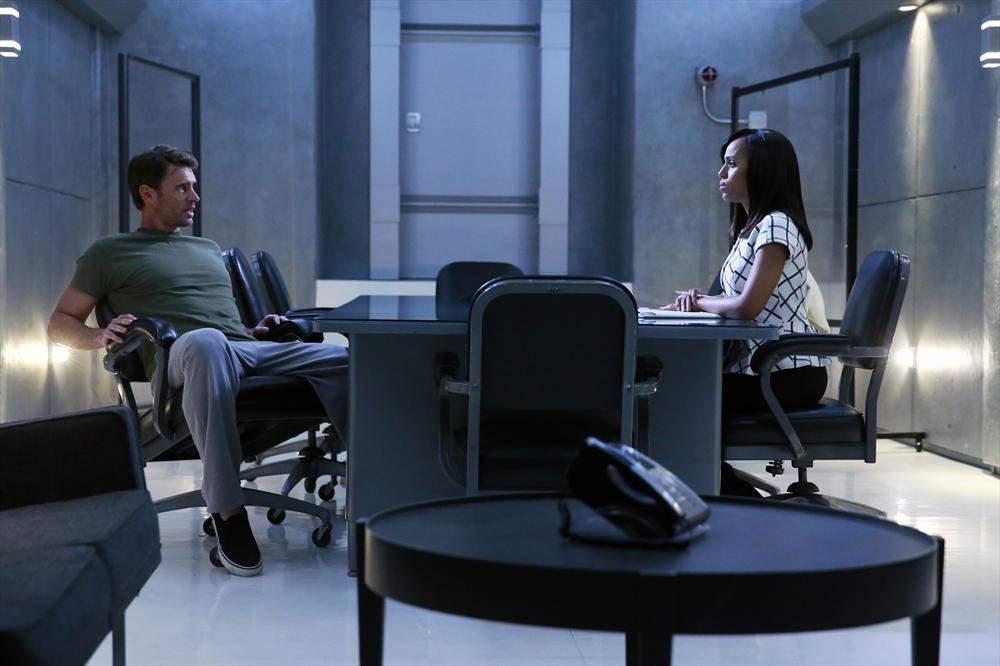 What happens when you put Jake, Fitz, and Olivia in a room together? Well, it certainly isnâ€™t all smiles and laughter.

The three now have a common goal, and thatâ€™s to get rid of Oliviaâ€™s father. But their love triangle makes the alliance pretty darn complicated.

As they talk about their options, Jake insists that Fitz call him â€œCaptain Ballardâ€ because they are no longer friends. Of course, that just makes Fitz angry, and causes them to fight more than plan. I love Jake so much in this scene. After all heâ€™s been through, he still manages to a certain amount of wit, sarcasm, and strength that no one else would be able to muster. And he ends the fight, at least in that moment, but telling Fitz he has access to all of the B613 files.

But Rowan Pope wonâ€™t be taken down so easily. He calls Olivia later and insists that he is still her family. He calls Fitz and Jake â€œboysâ€ and says that no matter what, Olivia will always have a place at his table. It actually seems like Rowan wants to be a father to Olivia, even though everything he says always comes out in â€œvillain.â€

Fitz is making me uncomfortable this season. His character is darker than it has been in previous seasons, and with good reason. But he tries to take power over Olivia in a way that makes my skin crawl. To an extent, heâ€™s always done this, but it just feels worse this season. Fitz is coming across as more sleazy and desperate than anything else. Back at the prison, Fitz tries to kiss Olivia, but she wonâ€™t let him. â€œThis is interesting,â€ he says, assuming that her reason is because of Jake. He finally convinces her, and they kiss, but only for a second before she pushes him away.

Jake is the one who is really losing hope, though. Earlier in the season he told Olivia that he knew sheâ€™s eventually choose Fitz over him. And in this episode, he still believes that is true.

Jake: You could let me rot in here. [It would] be easy — solve all your problems. I mean I did tell him that you loved me too, but I was just messing with his head. All you have to do is turn your back, and you and that Fitz guy can dance off into the sun.

Itâ€™s clear that Olivia has strong feelings for Jake. She has these two separate relationships with these two imperfect men, and now she has to work with both of them to have her father killed.

And Olivia is the one with the perfect plan for doing so. She calls her father in tears, saying that he was right. That all Fitz and Jake want to do it fight. Rowan says itâ€™s his fault and that he damaged her. That he wasnâ€™t a good father. He asks what he can do, and Olivia asks if they can have dinner. He agrees, seemingly eager to be able to spend time with his daughter.

But then she hangs up the phone, and like flipping a switch, turns off her tears and makes another call to say the plan is set.

I held my breath through their entire dinner, especially as a sniper got into position. Rowan gives this nice speech about how everything he has done has always been for Olivia, even though he knows he hasnâ€™t been the perfect father.

Then he inches closer to her as Fitz, Jake, and an entire military team watch them on screens from The White House.

Papa Pope is always one step ahead. He changes his tone, telling Olivia now that he knows she has forsaken him. He says he is leaving because of her now, and then men are about to die outside because of her. And as shots are fired killing every soldier in sight, Rowan tells Olivia just what a mistake she has made.

Rowan: You think the world is so terrible with me in it? Wait until you see what itâ€™s like without me.

Porthos Learns the Truth About His Father, The Musketeers “The Prodigal Son”