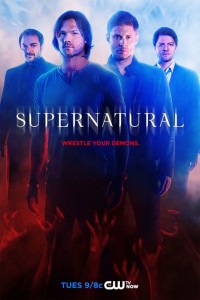 The cast and alums of the CW’s Supernatural as well as its legions of fans converge in southern California this weekend for Creation Entertainment’s final SPN-centric Con of the year. Starting tomorrow, the Salute to Supernatural Convention lands in Burbank for another round ofÂ Q&As, Meet and Greets and photo opportunities.Â It’s one more chance to bond and bask in the glory of what was a successful and entertaining 200th episode, “Fan Fiction.”

Making an appearance this weekend:

Whatâ€™s great about these conventions is that in addition to the various cast panels, autograph and photo sessions, there are other events and happenings that serve toÂ uniteÂ the fandom.

We will see you guys there!