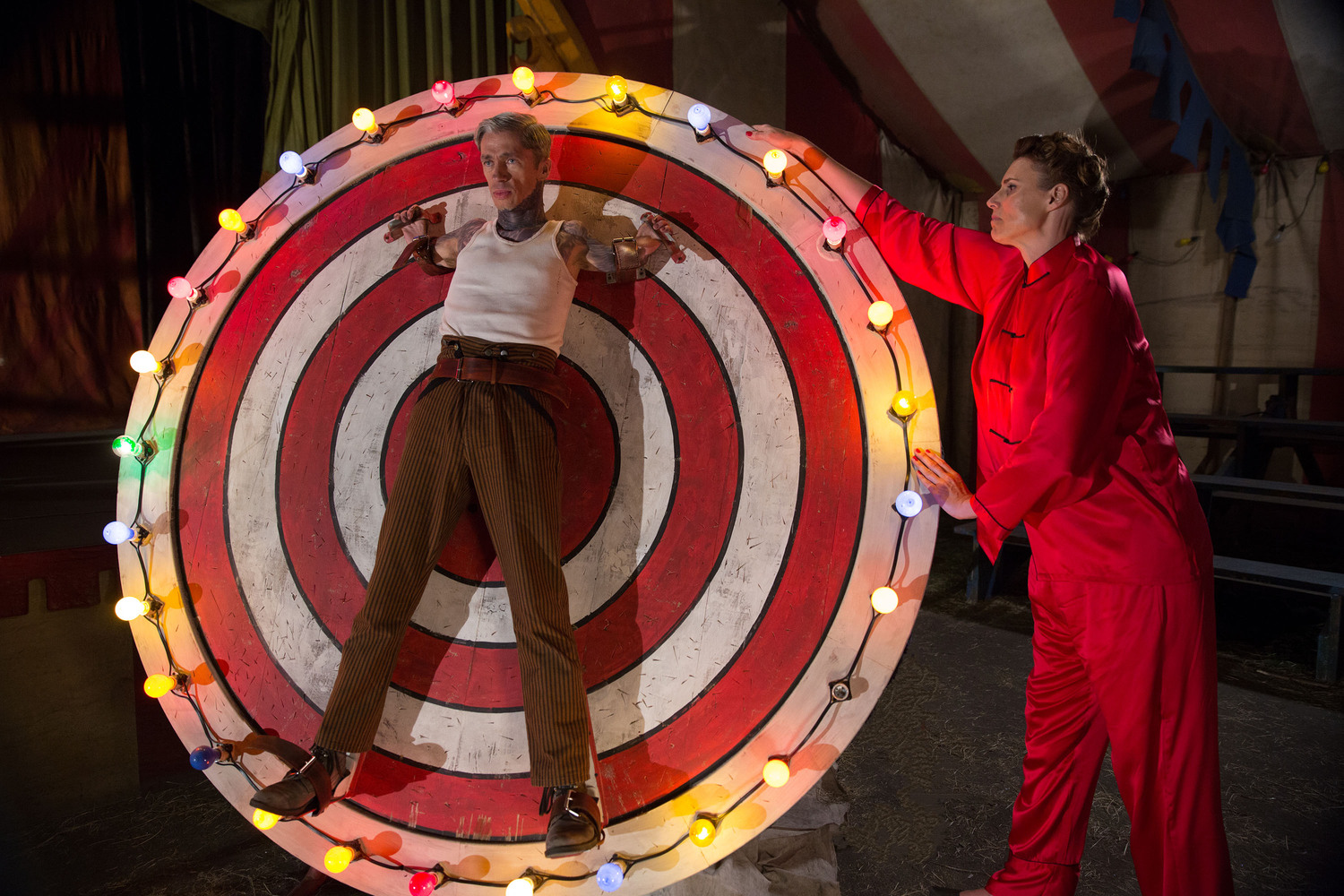 Is it possible for monstersÂ to find love? Well that’s what Dandy was hoping for on the latest installment ofÂ American Horror Story: Freak Show. I don’t know about you, but watching Dandy sayÂ he was going to marry Bette and Dot did nothing but confuse me.

I found Dandy’s declaration of love a bit sudden. I cringed when Gloria provided her son with condoms for fear having having a 2-headed grandchild. Dandy declared he would never “violate” Bette and Dot. He loves them. Okay,Â maybe it’s possible.

However, I’ve started to think that Dandy mayÂ be asexual. Dandy has shown little to noÂ interest in having sex with anyone. He stated he wouldn’t have sex with Bette and Dot and yet he wants to marry them. Clearly Dandy is able to separate the physical act of sex versus feelings of love.

Still, it didn’t take much for his fuse to short circuit when Dot wouldn’t corporate with him. Bette is taken with Dandy, but Dot knows better (and she only has eyes for Jimmy). Their conflicting diary entries are always great to listen to. Bette may be daft, but Dot may have a darker soul than anyone else.

Unfortunately, Dot may never see her nefarious dream come to fruition now that Dandy and Gloria know her true feelings. No surprise that Dandy read her diary. What Dandy wants, Dandy gets… until now. DandyÂ wasÂ so upset by these entries that he declaredÂ he was never destined for love; only death.

Things are not looking up for the Tattler twins, or Jimmy for that matter. You’ve got to admire the guy for going after the girls, but his chivalry is going to get him killed if he doesn’t watch himself. Danger, Will Robinson!

In other matters of the heart, Paul and Elsa were getting it on behind closed doors. Okay, sure. I guess it makes sense since they’ve livedÂ in close quarters for years. However, I was more shocked to see where Paul’s heart really belonged: with Penny, the candy striper from the premiere episode.

Poor Paul! I really hope he doesn’t die because I love his character. Elsa is quickly becoming the worst. Paul saw right through her after seeing Dandy in the store buying headbands. Of course Elsa freaked out over his accusations.

She can’t have her monsters turning on her and because she’s an extortionist of the soul, she had Paul pledge is allegiance and trust to her buy strapping himself to the spinning wheel. Elsa totally hit him with the dagger on purpose. There was a clear smirk on her face before she switched to a shocked expression.

Elsa may have herself fooled into thinking she’ll get away with hurting Paul and sending the Tattler twins away, but she should watch out for Ethel. Ethel may be her friend, but she has no qualms about killing Elsa if need be. AweÂ BFFs!

Another character who should watch her back is Maggie. She was so determined not to harm Jimmy, that she was on the verge of killing sweet Ma Petit. I was beyond nervousÂ watching Maggie carry Ma Petit to the barn. Seeing what could have happened was awful.

Thankfully, Maggie couldn’t go through with it. SheÂ also gave Jimmy hope (and a kiss) for a future with her. However, Stanley has other ideas. Since she couldn’t kill Ma Petit, she needs to kill Jimmy and deliver his hands. Probably not Jimmy’s idea of a first date, but the course of true love never did run smooth.

– Will Dandy attempt to kill both the Tattler twins and Jimmy?

– Will Ethel and the others wise up to Elsa’s lies?

– Why didn’t Maggie just come clean to Jimmy about Stanley?

– Where were Dell and Desiree during all this?

Nashville "I'm Coming Home To You"

The X-Files Settles In But Doesn’t Settle: “My Struggle” and “Founder’s Mutation”

The Strain “Creatures of the Night”