Once Upon a Time “Family Business” 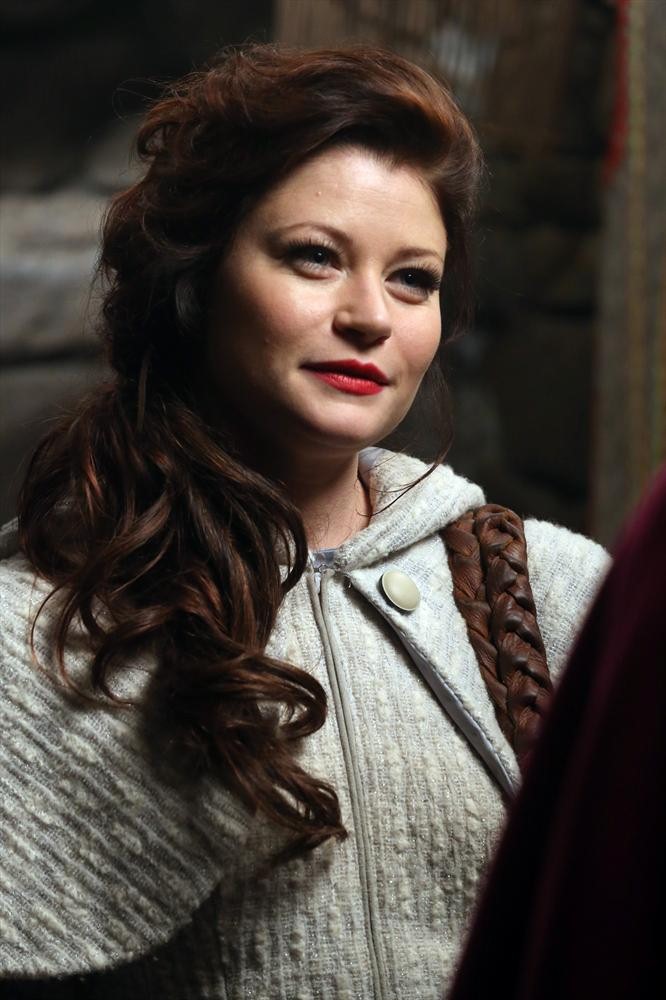 Belle lost her Mother right before her eyes but canâ€™t remember it at all. Thinking that knowing what really happened will give her peace, she sets out to find the magical rock trolls of Arendelle. Anna, who doesnâ€™t believe that Ingrid is really her aunt, also sets out to visit the rock trolls and see what they can tell her about this unexpected guest at her castle. Naturally, both being Disney Princesses, they end up at Oakenâ€™s shop at the exact same time so they can meet and become the best of friends. Even though Belle has been warned that magic comes with a price, she is apparently given a freebie by GrandPabby rock troll in the form of an amethyst crystal that will restore her blocked memories.

Her moment of truth comes when Ingrid the Snow Queen creates a storm at the most inconvenient time. Knocked down by strong winds, Belle drops the stone just as Anna slips off the edge of the high cliff. Choosing the stone over her friend, Belle leaves Anna hanging while she reaches for her prize. As is typical in most fairy tales, she ends up losing them both. The stone to gravityâ€™s pull, and Anna to the Snow Queen.

Guilt over her actions in Arendelle drive Belle to try and remedy things in present day Storybrooke. Dressed for the cold, (including a fun scarf laced with tiny daggers) she uses Rumpleâ€™s dagger to force him to take her to the Snow Queenâ€™s lair. There she plans to search for the sorcererâ€™s hat, not knowing that Rumple already has it stored safely away in the shop. Although her father warned her that magic should be avoided, clearly he failed to warn her against looking into mirrors that speak and emit their own underglow. When she addresses her reflection in the enchanted mirror, she finds that it magnifies her inner darkness and brings it to light. Itâ€™s interesting to see that some part of Belle suspects that the dagger she holds isnâ€™t the real thing.

Her adventure may have been for naught, but it gives Rumple a valuable tidbit of knowledge â€“ the Snow Queen once had her hands on the sorcererâ€™s hat. He uses it as a threat to leverage her against hurting his loved ones in her scheme of setting Storybrooke residents against each other. With the mirror she can cast her spell of â€œshattered sightâ€ which she seems to think will get her the family she wants. Itâ€™s unclear how the spell will convince Emma and Elsa to accept her as a sister and love her like she feels she deserves.

âžI have travelled the world near and far

âžMy obsession will not leave me

âžMy search will continue to the ends of the earth

âžOne thing I know for sure

âžThe name of the Savior is Emma

âžThe Savior shall be my sister

âžThe family must be complete

Elsa says this is a prophecy that Ingrid believes, and clearly she has been watching Emma for a very long time. The six months of her tween years that Emma canâ€™t remember were spent with the Snow Queen and it seems they cared a lot for each other. I wonder what went wrong?

There were some really telling clues in this episode. The seed has been planted in Belleâ€™s mind that the dagger isnâ€™t real, and Emma has found hints of her missing months. We are told that the rock trolls erased all memory of Ingrid and Helga from the entire realm; it seems possible that their magic could have worked retroactively on Emma and Elsa. Learning that there was a third sister is a surprise. I have long suspected it was Elsaâ€™s mother Gerda who trapped Ingrid in the urn, but it seems reasonable that Helga could have been the guilty party since they disappeared at the same time.

Moment of Goodness: Have you tried the sauna?

Oaken (Darcey Johnson), albeit slightly thinner than his animated counterpart, is another fine example of excellence in both casting and make-up this season. He is such a fun character with his whimsy and optimism. The Swedish accent is well done and the mannerisms are really similar to the film version. His one short scene stole the whole show!

Julian Doucet Talks About Killjoys “The Kids Are Alright?” [Exclusive]

Parenthood “How Did We Get Here”

Once Upon a Time “Heroes and Villains”

Once Upon a Time “Shattered Sight”