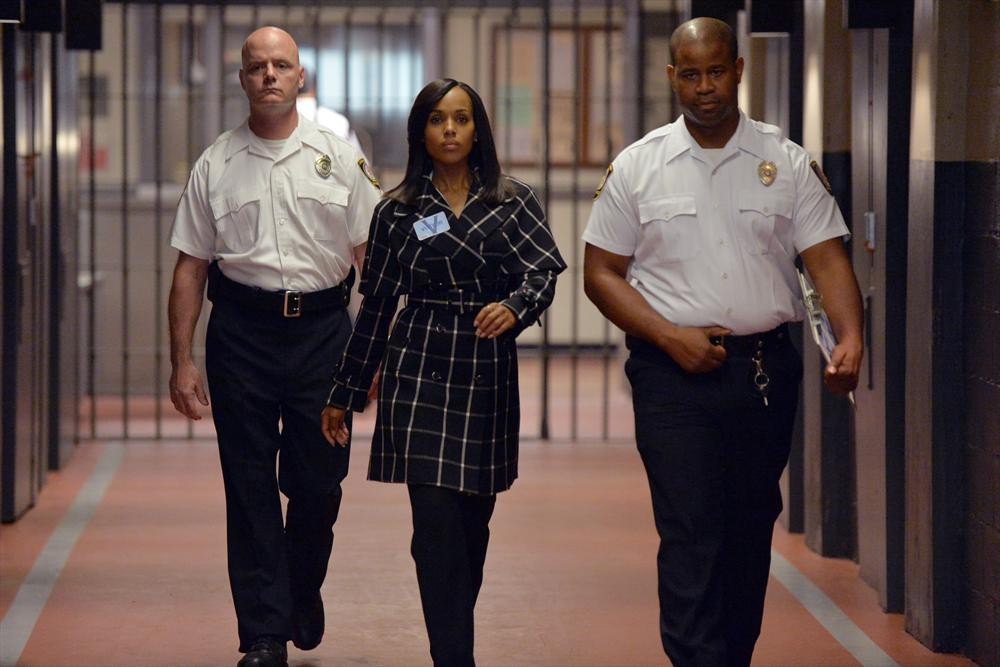 Hereâ€™s a tip. Donâ€™t tell Olivia Pope that you think her friend is a â€œbitch.â€ It wonâ€™t go well.

This episode of Scandal focused a lot of energy on the powerful female characters of the show and the way they are represented.

First of all, thereâ€™s Abby. Abby is really starting to show why this is going to be â€œher season.â€ Her new positon as press secretary has let her shine, but more importantly, sheâ€™s become willing to stand up to the president. Abby asks Fitz directly what has happened to Jake, and if he is getting fair treatment. Of course that just makes Fitz angry, and he questions why she thinks she can ask such a question.

Abby: â€œIâ€™m not asking the commander in chief. Iâ€™m asking the married man who used to sleep with my friend what exactly he has done with the man who sheâ€™s currently sleeping with.â€

Oh, and Abby also does some research on Cyrus, which manages to get her the upper hand since what she has learned about Cyrusâ€™ secret escapades could cause him to lose everything.

Thereâ€™s also Bitsy Cooper (Carol Locatell), former First Lady and wife of a former president who recently died. She visits Mellie in front of the press and acts like the perfect, sweet old lady who loves her country and loved her husband. But as soon as the press is gone, Bitsy changes her tone. She tells Mellie she will take care of everything and that Mellie should go back to doing â€œwhatever silly hobbyâ€ makes her feel like she is making a difference. Mellie is taken a back, but Bitsy insists and they are just the â€œbitchesâ€ who make it possible for the men to feel important.

I love this lady! She is so spunky, and I think her influence on Mellie is going to be really significant. She also admits to Mellie that actually, she was the one running the country when her husband was president. But what will she be remembered for? Not that.

Bitsy Cooper: â€œAnd what will I be remembered for? Telling idiots not to litter? .. â€œI will be remembered as the wife of a man who did something with his life.â€

Now, even though Fitz is angry with Abby, something she says struck a chord with him. Olivia has been having nightmares, and Fitz is worried. So he takes the risk and visits Olivia. But like I said earlier, donâ€™t call Oliviaâ€™s friend a bitch. He says that of Abby and it sets Olivia off â€“ a moment that explicitly deals with gender issues and inequality.

Olivia: â€œIf she was a man, youâ€™d say she was formidable. Or bold. Or right.â€

She refuses to discuss anything further aside from demanding to see Jake. Fitz is angry and stubborn and nearly calls Olivia a bitch, too.

And if thereâ€™s anyone that can stand up to Rowan Pope, itâ€™s his daughter. Olivia is swimming laps when her father approaches, angry that she was able to intervene and get Jake out of his hands.

Olivia: â€œYou may be command, Dad. But I have weapons at my disposal. Weapons that you canâ€™t possibly possess.â€

–Brian Benben (Dream On,Â Private Practice) plays Leonard Carnahan in this episode. And heâ€™s amazing. Everyone, including both the audience and Olivia Pope, believes the convict when he swears he is innocent of an attempted assassination on a former president. But as it turns out, this guy is so good he can even manipulate Olivia Pope. My only complaint is that I wish we could have seen more of him!

-Huck findsÂ a way to connect with his son without Kim knowing. Video games. Itâ€™s sweet to see how they are interacting without the son realizing it, and Huck has a look of joy on his face that Iâ€™m not sure weâ€™ve ever seen before.

-Jake tells Olivia that he knows in the end, sheâ€™ll choose Fitz over him. He has all but given up on when she visits, and just asks her to make sure his mother gets the money he has in an off-shore bank account. But when Olivia tells Fitz that â€œthereâ€™s hopeâ€ for the two of them if he makes sure Jake isnâ€™t killed, Fitz sees to it that Jake is sent to a proper facility.

Fitz: â€œConsider it my gift to the woman we love.â€

By the way, there are only two episodes left until the winter finale. What do you expect to happen, and what did you think of this episode? Leave us a comment and let us know your thoughts!

Once Upon a Time “Kansas”