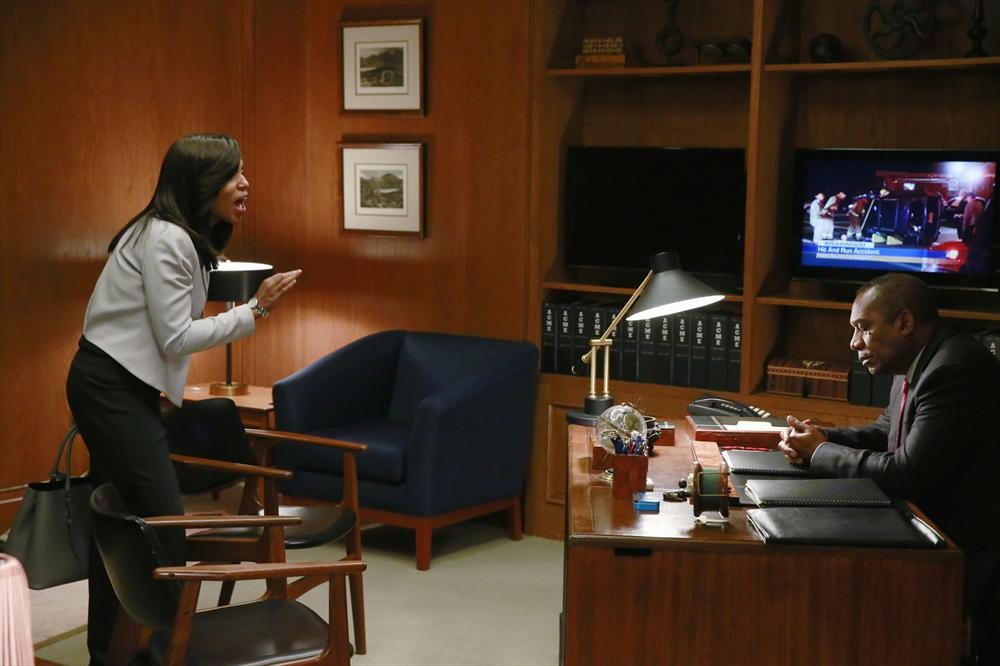 Okay. Everybody take a minute and breathe. Good. Now, letâ€™s try to process everything that happened in this weekâ€™s episode of Scandal. Are you ready?

Huck: Poor Huck. In this episode, we finally get to see what happened when he went to see his family at the end of last season. His wife thinks he is completely crazy and doesnâ€™t want him around. Huck, broken and sad, just wants to see his child. But Kim wonâ€™t allow it, so Huck has been doing what he does best, and sitting outside their house watching his family through the windows.

Kim (Jasika Nicole, Fringe) runs outside when she sees him and screams at him to go away, not wanting to listen to reason or believe a word about what Huck has been through. Finally, she invites Huck to come back that night, and itâ€™s clearly a set up. I bit my fingernails off when Huck arrived at her house. Well, it wasnâ€™t as bad as I expected it to be, but it was still a set-up. Kim has a doctor there to talk to Huck, again assuming that Huck is crazy. Huck becomes completely enraged, chokes the doctor and yells that Kim lied to him. To Huck, this is one of the most painful things someone can do, especially after he mustered the nerve to be honest with her.

Olivia and Rowan: Meanwhile, Rowan and Olivia are trying their hand at a â€œnormalâ€ father-daughter relationship, complete with wine and late night chats about relationships. Itâ€™s clear that Rowan is trying to earn Oliviaâ€™s trust as part of a larger scheme. Even worse, Olivia is put in a position of trying to decide which man to trust, her boyfriend (her â€œotherâ€ boyfriend as Cyrus calls him in this episode) or her own flesh and blood.

What Olivia wants is to believe the best in Jake, but her father makes a pretty strong case for himself. How? By essentially replacing Jakeâ€™s name with his and telling Olivia the plan he had all along. It makes perfect sense, and Olivia begins to believe her father, even though her gut tells her not to.

Mellie: She has been one of the most fascinating characters on the show this season. Sheâ€™s grieved, gone a little crazy, and had a few moments of trying to pull herself together. But when Fitz slips up and tells her Little Jerry was murdered, the words that come from Mellieâ€™s mouth are flat-out shocking. She says sheâ€™s relieved that Jerryâ€™s death wasnâ€™t random. That it had meaning.

Mellie: â€œHe died so we could stay in this white house for four more years. He died for our sins.â€

While this seems to be a dark, disturbing way to look at things, I think it makes sense that Mellie would cling to the idea of purpose. Finally, she can try to wrap her mind around what has happened to her son. To her family. The result? She strips away her robe and her boots and takes a shower that is heavy with symbolism.

Jake and Fitz: Jake is being held for interrogation at the Pentagon, assumed to be the person who ordered Little Jerryâ€™s death. Jake remains stoic and refuses to eat or drink, knowing that eventually, the president himself will come to see him. His plan works, and it almost seems it will have the desired result as Jake offers convincing reasoning for Fitz to believe that it wasnâ€™t him.

Jake finally eats and the two sing â€œSitting on the Dock of the Bay,â€ in what might be one of the oddest scenes of season so far. Then Fitz shows his cards â€“ he is trying to manipulate Jake into giving a confession. But Jake wonâ€™t break. Instead, he gets to Fitz in the most painful way that he knows how.

Jake: â€œYou have been waiting for this moment. From the second I got in bed with her. Youâ€™ve been waiting. I am here because of her. It doesnâ€™t matter what the truth is does it. The only thing that matters is that I put my hands where you think they donâ€™t belong.â€

And when Fitz returns a second time, heâ€™s angry with Mellie and filled with hatred. He tells the guards to get Jake to his feet. Then he rolls up his sleeps and beats the ever-loving hell out of him.

Whew. This was an intense episode, and the drama can only escalate from here. My favorite thing about this season so far? The character development. Even the characters I havenâ€™t touched on much have seen their own kinds of change, including Abby and David Rosen.

Guns, Booze and Zombies, Oh My, Z Nation "Welcome To The FU-Bar"